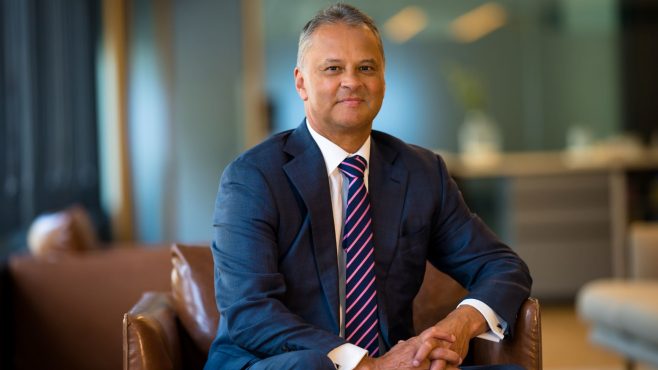 John Pearce, CIO, of UniSuper, on how to engage companies who fall below your own ESG standards. (Photo supplied by UniSuper)

Australian asset owners have been largely proactive when addressing climate risks. The country has experienced some fairly catastrophic environmental disasters in recent years, so this is an issue that is front of mind for many professional investors.

UniSuper is not the only Australian superannuation fund to have integrated an ESG and climate focus into an offering for scheme members, but with more than A$90bn currently managed with a climate focus, it is the largest manager of ESG-themed investment options in Australia.

The scheme has created a dedicated fund option – Global Environmental Opportunities (GEO) – so that members can access renewable energy and green building assets.

For the GEO portfolio, UniSuper’s team looks for companies that generate most of their revenue from environmental solutions. That encompasses energy efficiency (such as building insulation, LED lightbulbs, efficient public transport), renewable energy, water and waste management, and green buildings.

The “super fund” fully supports the terms of the Paris Agreement on carbon neutrality, in particular the target of zero emissions by 2050. From this starting point, its portfolio construction excludes investments in companies generating more than 10% of revenue from the production of thermal coal, across in-house active and external passively managed index portfolios.

“In particular, we’ve set ourselves the target for all our portfolio companies – our major holdings in Australian companies where our active engagement has influence – to have net zero operational emissions before 2050,” John Pearce, UniSuper’s chief investment officer, tells Capital Monitor.

Since decarbonisation will be a pervasive theme for at least the next decade, Pearce says this will involve a much greater share of renewables as a baseload energy source, and a phasing out of fossil fuels.

“Some companies will find this easier than others and we use engagement, both directly and through groups like Climate Action 100+, to encourage greater ambition in hard-to-abate sectors,” he says. “It is important that we get users of fossil fuels, as well as supporting industries, to look for technologies that can help their business be resilient in a low-carbon world.”

A prudent approach to portfolio management involves avoiding assets that are most likely to be stranded in the decarbonisation process. It also involves being aware of the risks of owning high emitters in a world that may require a faster transition to carbon neutrality than currently forecast.

In such a scenario, carbon emitters would likely be required to pay for negative externalities, says Pearce, as UniSuper’s internal team looks to align its views on stranded assets with external fund managers, prior to their appointment.

The fuel most at risk in the transition to a low-carbon economy is thermal coal for electricity generation. In 2020, UniSuper took the step of removing pure play thermal coal miners from its portfolio.

Its base case for oil and gas doesn’t assume growth in that sector either. However, the declining rate of demand and the need to replace those assets in decline presents a mixed picture.

“When considering likely investment cases for our investments in the energy sector, we consider the use and alternatives of the fuels, and the steps taken by both the company and its supply chain to offset these emissions,” says Pearce.

The future of energy

For example, metallurgical coal is used in steel manufacturing and has few alternatives. Electric vehicles and alternative heating sources threaten oil, but the outlook for gas is more mixed, he adds.

Hydrogen is being touted as having the potential to be a zero-carbon replacement for fuel. To better understand the future for its energy company investments, UniSuper is actively researching hydrogen, its potential uses, and the supply chain issues, says Pearce.

“Our goals are focused on global emissions reductions and we’re mindful of the life cycle emissions of the products and services we invest in, not just the emissions of the company itself,” he says. “We don’t want to restrict our ability to invest in relatively high-emitting companies and sectors that are producing the materials and technologies to decarbonise; for example, solar panels.

“However, it’s important that these companies also decarbonise their processes. While our short-term targets currently focus on operational emissions, we will be looking to consider strategy and supply chains in the future.”

The decision as to what assets to deploy capital to can be quite opportunistic and Pearce says UniSuper does not predetermine allocations to particular sectors. It has a collaborative cross-functional team where, for example, its infrastructure analysts look at both listed and unlisted infrastructure.

“When it comes to actual capital allocation it will depend on prevailing market circumstances.”

“When it comes to actual capital allocation it will depend on prevailing market circumstances,” Pearce says. “For example, the latest inflows to our GEO option have been allocated to more defensive equities, such as green buildings, as valuations of high-growth companies such as Tesla look a bit stretched. This, of course, could change in a matter of weeks.”

Anxious not to be victims of climate hype, Pearce says the company recognises that many of the more traditional green themes have attracted a lot of capital over the past year. “We are a little wary of current prices for some of the more obvious green investments,” he explains.

The opportunistic approach also allows the team to look outside alternative energy and green buildings to see what’s coming down the pipe.

“There are a lot of emerging technologies that look really interesting, but also the facilitating, supporting infrastructure and materials – such as minerals like copper and lithium, carbon offset markets, hydrogen, strengthening the grid and making it more supportive of high levels of renewables.”

Pearce says the fund has not prioritised private markets because the opportunities in the unlisted space can be niche: “They may not require large amounts of capital and may not become commercial, but they will have a higher administrative burden, and higher fees to identify and assess.”

Transitioning the portfolio to net zero is an ongoing process that could take many years to achieve, but Pearce is keen to see the fund making tangible progress in the short term.

By the end of 2022, he hopes “that the vast majority of our portfolio will have set Paris-aligned targets (currently just over 50% of the portfolio components have done so), and that we see meaningful emissions reductions in our investments and across the Australian economy”.

Measuring the impact of a climate investing strategy is fraught with problems and UniSuper is not alone in finding that it’s a case of making gradual improvement in the quality of reporting it is able to provide to members.

Its key short and medium-term targets are clear and measurable. The requirement for Paris-aligned targets and ensuring the carbon intensity of portfolios is lower than market benchmarks, for example, are easily verified using external data.

The fund uses a range of data sources, with MSCI ESG Research Sustainable Impact Metrics forming the core of its reporting, supported by in-house analysis. UniSuper is also working with its custodian, BNP Paribas, to provide regular updates on the carbon footprints for its portfolios.

Pearce observes that only around 65% of companies represented in global indices currently report on their emissions.

“Furthermore,” he continues, “reporting is not uniform, so like-for-like aggregation isn’t always possible, even for those companies that do report. So, while we are trying to be as transparent as possible, the result will be less precise than we would like, due to information gaps. It’s our expectation… all companies will be reporting on emissions and target reductions in a manner consistent with the Taskforce for Climate-related Financial Disclosures (TCFD).”

The most recent (2020) analysis of UniSuper’s investment options found that the carbon intensity of most had fallen since 2018. However, the GEO fund option has a relatively high carbon footprint, as it invests in manufacturing and industrial processes that have high Scope 1 and 2 emissions, but facilitate lower emissions in their supply chain.

In other environmental risks, Sydney Airport represents the fund’s biggest direct exposure to rising tides, says Pearce. The airport is addressing this risk through its Airport Environment Strategy 2019-2024, which directly considers the adaptation of infrastructure, systems and organisations in response to a warming climate.

Writing to the board

UniSuper’s hands-on approach to managing the emissions issue includes incorporating a shadow carbon price when the team is analysing and valuing material investments they expect to hold for the medium to long term. This will help it to assess the exposure to risks and viability of future projects, says Pearce.

We’ve written to the board of Leichhardt Coal to confirm we do not support the development of the mine.

The fund has a long-standing, unlisted investment interest in Leichhardt Coal (LCPL). This gives it an indirect interest in a joint venture, majority-owned and managed by Glencore, which developed the Blair Athol coal mine in Queensland.

As well as its support and adherence to global climate reporting benchmarks, UniSuper is active in a number of cooperative groupings, including the Investor Group on Climate Change (IGCC), a collaboration of Australian and New Zealand institutional investors, with total funds under management of more than $2trn.

Pearce says the IGCC has been successful in building an effective organisation that has been able to educate and build climate skills within its members, and also leveraging that membership base for advocacy and engagement.

UniSuper’s climate change strategy has been well thought through and is now applied across the entire fund. “We see a huge opportunity to work with companies and encourage them to be well-positioned for a low-carbon future,” says Pearce.

Topics in this article : Stranded assets

An asset management and Asia-Pacific reporting veteran, Richard lives in New Zealand.
Websites in our network