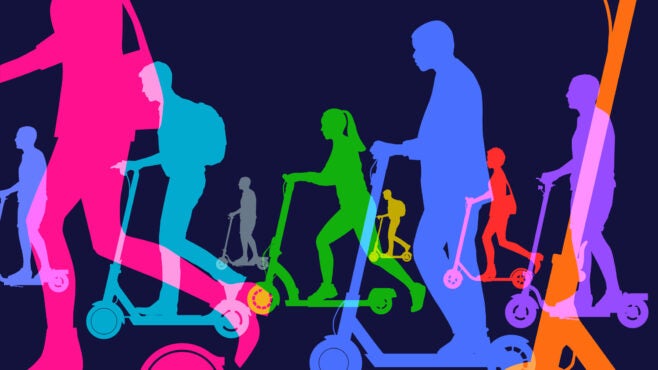 All going the same way? Venture capital investors are hot about climate tech, but the majority of their bets are being placed on the mobility sector. (Image by smartboy10 via iStock)

Venture capitalist (VC) investment in ‘climate tech’ is at an all-time high with a record $87.5bn of capital injected into the sector in the past 12 months, according to fresh PwC analysis of data from Dealroom. This marks a 210% jump on the year before and a boon to start-ups keen to disrupt a thriving marketplace.

Recently coined, the term ‘climate tech’ is broadly defined as technologies and companies that aim to improve environmental sustainability – a few familiar and vastly successful unicorns (private companies valued at more than $1bn) might spring to mind, such as Beyond Meat, with its plant-based burgers, or Tesla, with its electric vehicles business.

But while the headline investment figures are promising, PwC’s analysis reveal a high proportion of that early-stage investment is skewed towards specific sub-sectors, many of which may have only a relatively minor impact on carbon emissions.

In its ‘State of Climate Tech 2021’ report published in December, PwC notes that while the majority of VC investment centres on the mobility and transport sector, other crucial sectors such as the built environment (high-efficiency fittings for commercial and residential buildings, efficient construction methods or waste management on building sites) only make up 4% of funding despite having 21% of emissions reduction potential.

This is illustrated by the below chart, which shows the deal flow and decarbonisation. While the mobility sector includes electric vehicles and is dominated by a handful of ‘megadeals’, with companies such as Lucid Motors raising $6.9bn, the built environment sector is relatively underfunded.

Opportunities in the built environment

It is not entirely clear why capital is steering clear of the built environment sector, but a few clues exist. According to Leo Johnson, disruption and innovation leader at PwC, it includes “proven technologies that are massively lower cost, and massively lower carbon”. However, they “just don't seem to be attracting the capital they need to scale up”.

While technologies such as 3D printed construction materials are “absolutely proven”, they face barriers to implementation, like a lack of incentives from housing regulatory bodies or net-zero commitments from developers. Johnson argues that a “tightening of the network of implications – the quasi regulator” is needed to prise investment.

KP Reddy, the founder and CEO of Shadow Ventures, which provides venture capital for start-ups within the built environment sector, believes it is down to the characteristics of the sector itself.

“The industry is very fragmented,” he says. “You're almost always chasing every new project – a new apartment, a new shopping centre.”

Reddy also says many business leaders may not realise they should be looking to built environment innovation as a solution to cutting out carbon emissions. He recounts speaking recently with a major airline: “They said, ‘look, we're trying to get to carbon-neutral. And our biggest issue is jet fuel.’ I replied: ‘Is it actually jet fuel? Or is it your buildings and your terminals? Because if you add all of that up, it might actually be more than jet fuel.’”

Although there is fragmentation, there are also macro developments to be mindful of. For example, while some industries, such as the warehouse sector, have decided they want to decarbonise using built environment innovation, the retail sector is under such pressure to survive that investing in decarbonisation takes a back seat. Reddy equates this with attitudes towards decarbonisation more generally.

A reason for why VCs are displaying a degree of herd mentality may be found within the history of the sector itself. Climate tech has only been popularised in the past couple of years. Its former incarnation, ‘cleantech’, is recalled as a failure by VCs thanks to the boom-and-bust cycle between 2004 and 2014.

A report from MIT Energy, which details the breakdown of the cleantech era, paints a vivid picture of cleantech’s boom: a post-Al Gore recast as an environmenalist, pre-financial crash period around 2004, when, buoyed by the escalating success of three solar companies publicly valued at more than $100m, and the early Tesla hype, VCs made risky bets on the burgeoning sector.

According to the report, it was much riskier than the sector’s counterparts – medical technology and software – yielding substantially lower returns, and too illiquid and expensive to scale up in "razor thin" commodity markets. Cleantech companies were "unsuited to the VC investment model", the report concludes.

That we are now seeing a resurgence, or a “sexier rebrand” of the asset class, as described by PwC’s Johnson, begs the question what has changed? Johnson says that the recent slew of ESG disclosure regulation is making all the difference.

Describing a new social and regulatory environment, Johnson references the surge in net-zero commitments with Scope 3 obligations, plus disclosure-related regulation, such as from the EU or the Task Force for Climate-related Financial Disclosures, which is turning decarbonisation into a “financial driver”.

Specifically, on the tech side, Johnson adds, it “has just gotten better”. He points to how solar has “routinely outperformed” the International Energy Agency’s expectations, in terms of effectiveness and price, and “exponential technologies”,  such as AI and blockchain are “accelerating and combining”, taking “big bites out of those broken old fossil fuel models”.

Johnson issues some caution, pointing out that “there's still a massive gap around carbon levies and a proper price of carbon – the elephant in the room”. And while “suddenly people are getting really excited about the ‘gigacorns’” (climate unicorns), with the likes of BlackRock CEO Larry Fink claiming that the next big winners will be in climate tech, there is a deficit in the number of investors in later, or Series C, funding compared with early-stage investors.

Despite the revolutionary potential of climate technologies, activists warn that a reliance on hard-to-scale solutions to decarbonisation distracts from the drastic need to quickly slash global emissions.

As climate activist Greta Thunberg said in her speech at Cop26: “We need immediate, drastic annual emission cuts unlike anything the world has ever seen… As we don’t have the technological solutions that alone will do anything even close to that, that means we will have to fundamentally change our society.”

PwC’s report highlights carbon capture, utilisation and storage as an investment area that would benefit from policy changes like a carbon price.

An area of climate tech where a question mark hovers over its overall carbon reduction potential, is carbon capture, utilisation and storage (CCUS). Although activists are highly sceptical of the technology, PwC’s report highlights CCUS as an investment area that would benefit from policy changes such as a carbon price.

The report concedes that CCUS technologies are "complex" as "whilst they can significantly reduce emissions from energy generation and intensive industrial processes, they also prolong global dependence on fossil fuels and are seen by some as counterproductive in the mission to a net-zero future". According to PWC’s report, two of the top three investors in this area are Oil and Gas Climate Initiative (OGCI) Climate Investments (the OGCI's membership includes oil majors ExxonMobil and BP) and Chevron Technology Ventures.

The importance of finding ways to mitigate against climate destruction is huge, and in this context it is easy to see why climate tech start-ups are fast gaining popularity. But by placing all one’s bets on certain nascent, hard-to-scale up technologies, such as CCUS, everybody involved could end up losing out - a key reason why VCs are holding off splashing cash to all reaches of the climate tech sector.