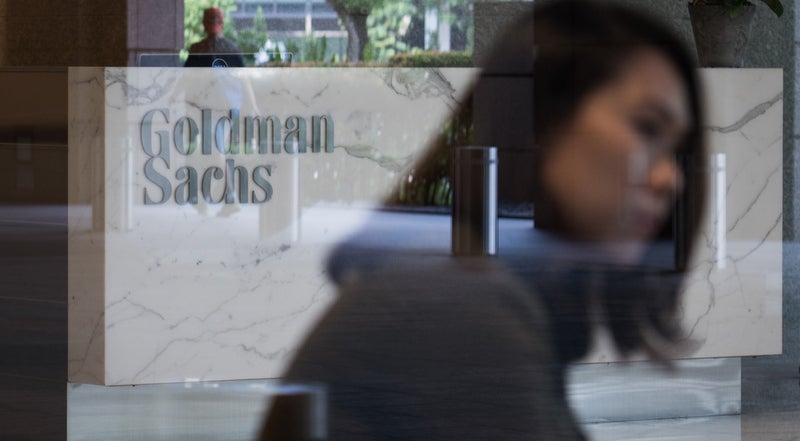 Goldman Sachs’ Singapore office: the bank is keen to stress its focus on sustainability aligns with its commercial approach. (Photo by Nicky Loh/Bloomberg via Getty Images)

The financial services sector is under immense pressure to step up and use its influence and capital to tackle climate change and other threats to the planet and its people. Not least banks, which are under fire for their financing of heavy polluters, most notably of fossil fuel producers.

Like many of its peers, Goldman Sachs has struggled to convince sceptics it is making a genuine push to help reduce carbon emissions.

The company offers or is developing various ESG-related initiatives and products. And it will point to its recent acquisition of Dutch fund house NN Investment Partners (NNIP), unveiled last month, as a big step in the right direction.

The deal underlines Goldman Sachs’ key priority of European expansion and brings in a team with a “great history of leadership” in sustainability and ESG as well as a chance to work more closely with insurers, says John Goldstein, head of the sustainable finance group, speaking exclusively to Capital Monitor last week.

The takeover also reflects the bank’s strategy in respect of Goldstein’s own impact investment company, Imprint Capital. It was acquired by the bank in 2015 and he came with it.

Goldman Sachs is also keen to emphasise its progress on its 2030 goal of reaching $750bn in financing, investing and advisory activity focused on climate transition and inclusive growth. Having set the target in December 2019, by the end of last year it had realised more than a fifth of this goal, reporting $156bn in sustainable finance activity.

Moreover, the bank is piloting a tool that shows clients how aligned their businesses are with the 2015 Paris Agreement on climate change. The pilot started with oil and gas and utility companies and is being rolled out to other sectors. The service helps companies understand how investors see them in light of the climate transition. It analyses corporates’ progress on this front and helps set more aggressive decarbonisation targets where necessary.

But Goldman Sachs’ current lack of transparency around its own exposure to high-carbon sectors does not support its cause as a proponent of sustainability, although it is looking to make improvements on this front.

We plan to publish a ‘heat map’ highlighting areas of high transition risk exposure across lending, equities and derivatives in our TCFD report later this year. Spokesman, Goldman Sachs

The bank will set interim business-related climate targets by the end of this year. “We plan to share additional details on our approach, including pilot projects and methodologies to evaluate climate impacts, in our next annual TCFD [Task Force on Climate-Related Financial Disclosures] report later in 2021,” says Sebastian Howell, executive director of corporate communications at Goldman Sachs.

The bank also plans to publish a ‘heat map’ highlighting areas of high transition risk exposure across lending, equities and derivatives in the TCFD report, he adds.

All this being said, it should be noted that the company is – arguably even more explicitly than its investment bank peers – focused above all on generating profit for itself and its clients.

That is as true for the product development process within the sustainable finance group as it is for other parts of the firm. Goldstein’s 12-strong team works with other parts of the business to identify an ESG-related problem that clients are facing, develop a solution and then scale it.

“[Sustainability] is a central commercial issue,” he says. “That means our focus is commercial and that’s our job.”

Financial innovation is at the heart of the sustainable finance team’s approach, as it is for the bank as a whole. For instance, Goldman Sachs last week launched what is says is a first-of-its-kind ESG-linked demand deposit account for US water technology provider Xylem. The bank plans to roll the tool out to other clients under its new transaction banking franchise.

The account pays a yield linked to Xylem’s sustainability strategy. The New York-based company will get paid more if it hits its targets, which include preventing some seven billion cubic metres of polluted water from flooding communities and entering local waterways. If it does not, it will be penalised.

Yet incentivising a sustainability champion to meet its goals is hardly moving the dial on climate change. As a company looking to solve water and infrastructure challenges through innovation, it is likely that Xylem will hit its targets. The real test will come when the product is rolled out to ‘brown’ companies or those at the early stages of their low-carbon transition, as it plans to over the coming months.

The ESG-linked deposit product works by pushing a market leader like Xylem on its sustainability targets, but it also provides a good entry point for clients at the early stage of their sustainability journey, Goldstein says.

“For those clients, maybe a KPI-linked bond or loan is too big a step,” he explains. “Transaction banking services are a good first step. How do they get started making those KPIs [key performance indicators], and ensuring they are meaningful enough?”

Goldman Sachs expanded its transaction banking business – which it dubs TxB – to the UK in June, having launched it in the US a year before. Goldstein and his team will likely help the global TxB team structure the next three to five transactions, after which the desk will scale up the product itself.

It is a similar story across the business. In investment banking, Goldman Sachs deploys what it calls a decarbonisation service. It is a diagnostics and cross-firm solutions package, so to speak, that addresses where a client is in its decarbonisation strategy and what the bank can do to help.

For example, technology giant Apple, having determined how it would eliminate 75% of emissions from its supply chain and products by 2030, approached Goldman Sachs for a solution to address the remainder. The bank structured, and will manage, the $200m Restore Fund to invest in forestry projects that remove carbon from the atmosphere. The vehicle is designed to generate financial returns and ensure measurable carbon sequestration.

The fund aims to remove at least one million metric tones of carbon dioxide annually. It was launched in April alongside US non-profit Conservation International, which will ensure the projects meet strict environmental and social standards.

The fact remains, however, that there is as yet little detail available to show where Goldman Sachs is on its own sustainability journey or give a real sense of the scale of the challenge ahead. The bank does not publish its exposure to high-carbon sectors nor any estimates of its financed emissions.

It did commit in March to aligning its financing activities with a net zero by 2050 pathway; however, like many such pledges by corporates and institutions, it is short on substance as to how it will be achieved. Goldman Sachs is also notable by its absence from the Net-Zero Banking Alliance.

The only interim target the company has set is to achieve net-zero emissions in its operations and supply chain by 2030, alongside the interim business-related climate targets it plans to have in place by the end of this year.

The 'Banking on Climate Chaos' 2021 report, by environmental non-governmental organisation (NGO) Rainforest Action Network (RAN), ranks Goldman Sachs as the 15th-largest financer of fossil fuels globally, but the smallest banker of fossil fuels out of the big six US banks. The NGO gives the bank a low overall fossil fuel policy score of 20.5 out of a 100, which puts it below Bank of America (22) and above JP Morgan (17.5).

Goldman does appear to be making progress in some areas, however. It facilitated $18.94bn of financing to the sector in 2020, down from $21.58bn a year earlier, the study says (see graph above).

The bank is also setting explicit financing restrictions for certain high-carbon sectors, including coal. In 2019, RAN praised it for announcing the strongest fossil fuel restrictions of any major US banks, but pointed out it still remained far from aligned to a 1.5°C degree scenario.

Goldman had ruled out direct financing for new or expanding thermal coal mines and coal-fired power plant projects worldwide in 2019, as well as direct finance for new Arctic oil exploration and production. The bank also committed to a phase-out of financing for significant thermal coal mining companies that do not have a diversification strategy. Crucially for RAN, this policy covers the underwriting of stocks and bonds, not just direct financing, and includes a commitment to explicitly phasing out exposure, rather than just reducing it.

Reclaim Finance is calling on Goldman Sachs to adopt a more stringent approach: to exclude all coal developers and detail an overall strategy to fully exit coal by 2030 at the latest in EU and OECD countries and 2040 worldwide.

“Almost everything remains to be done,” the NGO says.

That may be a slight exaggeration, but it seems Goldman Sachs – some interesting and innovative solutions aside – could be a lot further along its own transition path than it is.