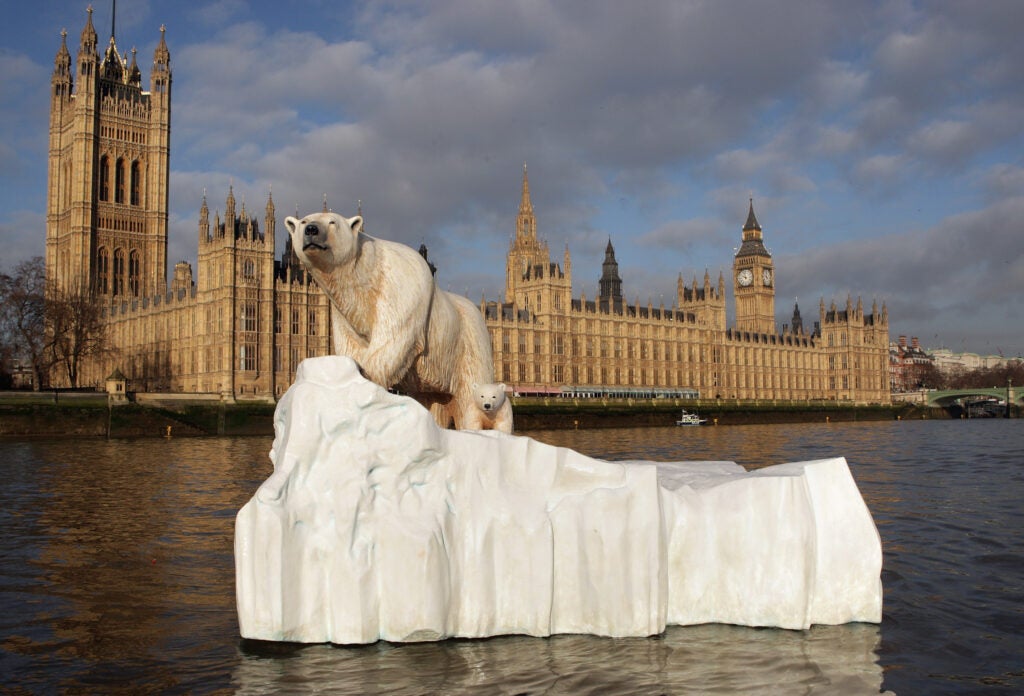 A 16ft-high sculpture of a polar bear and cub on a small iceberg passes in front of the Houses of Parliament in London, England. (Photo by Oli Scarff/Getty Images)

In the years following the financial crisis, the global regulatory response was nothing short of remarkable. Politicians and regulators around the world doled out rules governing everything from executive pay to capital requirements, largely in step with each other. And while the steady stream of fresh rules continues to this day, much of it was in place within two years of Lehman Brothers’ collapse.

Yet more than five years after 195 countries signed the landmark Paris Agreement in 2015, committing to limit global warming to well below 2°C, global collaboration on climate finance policy has been largely non-existent. It is time for this to change.

A recent shareholder uprising at HSBC provides a timely example of why this is important. In January, a group of more than 100 investors wrote to the bank to formally request a concrete plan for reducing the bank’s dealings with the fossil fuel industry. Around 80% of fossil fuel funding comes from the banking sector.

Coordinated by NGO ShareAction – which put similar requests to Barclays last year – the shareholder resolution points out that HSBC is the second-largest fossil fuel funding provider in Europe and has provided billions to fossil fuel companies since 2015.

HSBC could be seen as an unfair target. In the autumn of 2020 it became one of only a small handful of banks to publicly announce its net-zero ambitions, but critics, quick to note the choice of wording (the use of ‘ambition’ rather than ‘commitment’), are concerned the bank is escaping accountability by failing to provide detail on how it will get there.

One investor involved in the action remarked: “There’s a big difference in terms of impact if an institution is planning to front-load its carbon-reduction activities or wait until the last minute.”

A closer look at HSBC’s 2020 plan for becoming a net-zero bank (note that this also includes its customer base) reflects a problem at the heart of voluntary climate reporting: even when details are forthcoming they typically lack any context to make sense of them.

HSBC said it would prohibit lending to new clients that derive more than 50% of their revenues from coal mining. Sounds promising, but very few companies are so highly exposed to just one natural resource – and by limiting the policy to new business only, deals for existing clients can still go ahead.

HSBC also said it would no longer extend finance earmarked for the explicit purpose of new coal mining projects. ShareAction pointed out that just 5% of all financial flows into coal globally are labelled as project finance. Without restrictions on other types of lending, the bank can continue to extend other types of loans and underwriting services to the same companies. Money is fungible after all.

As it turns out, a little bit of public shaming can be highly effective. In March, HSBC put forward new commitments, which shareholders will vote on in May, to better align its book of business with the Paris Agreement.

While this is undoubtedly a win, HSBC is not unique in its selective approach to climate reporting. The story serves as a useful example of the growing trend among investors – largely pension funds, and so by extension the public – to demand more transparency from the companies they invest in.

To its credit, the private sector has launched a slew of reporting and transparency initiatives over the past decade. There is no lack of good intention out there. However, such initiatives represent an alphabet soup of acronyms and initialisms that only the deepest industry insiders can keep up with.

These initiatives aim to standardise things, to create uniform metrics that simplify the comparison process for investors. Yet with so many standards to choose from, all of which are calculated slightly differently, it’s unclear how much more transparent the market really is.

The biggest fear is not that policymakers won’t get their hands dirty, but rather they fail to work in unison.

This is where the public sector can take a lead. Without universally mandated metrics for reporting – like those used by accountants, for example – banks can shout about their investments in sustainable activities and leave out where the remainder of their book of business ends up. Reversing the environmental damage already caused will take more than just new investments in clean energy.

The biggest fear is not that policymakers won’t get their hands dirty, but rather they fail to work in unison. The UN Principles for Responsible Investment recently warned of an “inevitable policy response” to climate change, which financial markets are underprepared for. It expects that by 2025 “forceful, abrupt, and disorderly” policy will be rolled out across the board.

Some transparency initiatives are beginning to lead the pack. Perhaps the most widely accepted is a project led by supranational body the Financial Stability Board (FSB) that encourages companies to report on the climate risks they face. Known as the Task Force on Climate-related Financial Disclosures (TCFD), it is gradually being adopted by companies, and even more gradually by governments. So far New Zealand and the UK have announced plans to adopt TCFD standards, which is undoubtedly positive, but further illustrates the lack of a level playing field.

Even so, the TCFD has achieved the relative success it has because the FSB’s remit matches the global nature of banks. The TCFD 2020 status report said that more than 1,500 organisations had expressed support so far. It, along with the FSB’s other work on banking regulation, shows that global cooperation can work. A separate initiative led by the IFRS Foundation, which sets the accounting standards used in more than 140 countries, is similarly promising.

The selection box of standards and metrics currently available show it cannot be left to even the most well-meaning private sector actors. The public sector’s collaboration and leadership are required.

In fact, when it comes to measuring impact, the ultimate outcome of the HSBC resolution is somewhat beside the point. Its success is likely to prompt further resolutions at other banks, but until the transparency playing field is levelled by policymakers, the pull for a commercial enterprise to put itself at a competitive disadvantage by volunteering to reveal its corporate strategy is still lacking.

The unarguable proof in the science shows that world leaders cannot afford to dither any longer. With banks being the lifeblood of the fossil fuel industry, global warming cannot be halted without buy-in from them. And as their relative financial health throughout the chaos of 2020 shows, regulating them works.

With the UN Climate Change Conference (Cop26) on the horizon, there is no better time for the world’s leaders to come together and set the sustainability reporting bar high.

Topics in this article : Accountancy