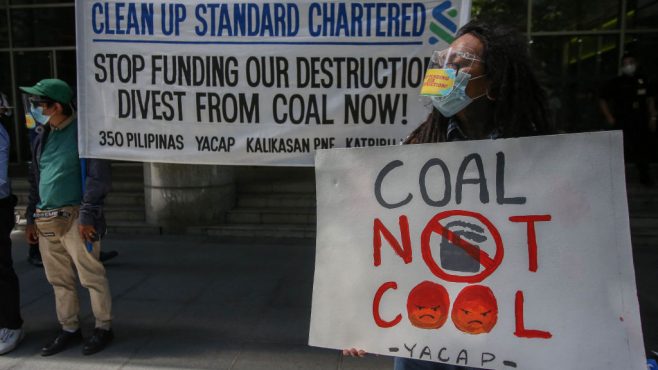 Environmental and climate activists stage a protest in front of a Standard Chartered bank office in Manila in March 2021. (Photo by Jam Sta Rosa/AFP via Getty Images)

With a footprint in 60 markets across Asia, Africa and the Middle East, Standard Chartered is uniquely placed to help some of the world’s most vulnerable nations finance the climate crisis.

In a world racing to meet the climate ambitions of the Paris Agreement and ensure an equitable, sustainable future for its citizens, the trade bank has committed $75bn towards the UN Sustainable Development Goals (SDGs) by 2024, all the while working to meet its own operational and financed net zero by 2050 commitment.

The UK-headquartered bank has made some headway. It can trace its sustainable dollars to the number of hospital beds financed, tonne of CO2 emissions avoided, or volume of microfinance loans disbursed. Responsible and sustainable banking is embedded in the group’s strategy, right through to employee pay packets.

It is also at the forefront of green financial product innovation, together with HSBC structuring the first sustainability-linked transition Islamic bond for Etihad Airlines in October last year, and in March launching a new sustainable trade finance proposition.

But despite this, Standard Chartered is still a major backer of carbon-intensive companies. The bank’s total exposure (loans and advances) to eight high-carbon sectors, including oil and gas and steel, actually rose in 2020 to $25.2bn, up from $23.7bn in 2019 and $23.1bn in 2018, according to its 2020 Task Force on Climate-Related Financial Disclosures (TCFD) report.

Its financing activities have recently been the focus of #FridaysforFuture, a movement led by Swedish activist Greta Thunberg, which named Standard Chartered “the UK’s coal bank” and “a climate killer”. It launched a campaign calling for the bank to stop financing fossil fuel companies immediately.

The Rainforest Action Network’s annual Banking on Climate Chaos report also found fault with the bank, pointing out that Standard Chartered’s financing the top 100 oil, gas and coal companies expanding the use of fossil fuels almost doubled from $1.7bn in 2017 to $3bn in 2020.

So what explains this apparent contradiction? Is Standard Chartered guilty of empty rhetoric when it comes to climate change?

The bank’s own target-setting shows mixed success. Of the $40bn committed to sustainable infrastructure by 2024, for example, the bank has deployed only $2.4bn, reporting its own progress as “not on track”.

But of the $35bn of project financing for renewable energy, it was “on track” with $18.4bn in 2020. And while the impact reporting on its $3.9bn of certified sustainable finance assets is impressive – 738,998t of emissions avoided – the bank has a long way to go to scale this to its total assets of $789bn.

Daniel Hanna, Standard Chartered’s global head of sustainable finance, does not dance around the subject. He says the NGO community is absolutely right to call out the financial community for not moving fast enough to address climate change.

“We’re not driving enough capital,” Hanna tells Capital Monitor. “A lot of what we have done so far is the easy stuff. We’ve made the commitments and that’s great, but now we need to work out how we’re going to do it.”

But he notes a hard stop on fossil fuel financing, as called for by #FridaysforFuture, would present many challenges to both the bank and the countries it finances, and is why the bank is taking what it calls a phased approach to reducing its coal funding.

“One of my biggest criticisms of sustainable finance and ESG now is the obsession with numbers – yet another record green bond – but the reality is, the capital is not actually flowing to the tough decisions,” says Hanna.

“We talk about reducing dependence on brown energy in our markets but there are 600 million people who have no access to power at all. How do we create conditions for a just transition where we are helping people get access to power, where we are lifting living standards?”

And this is where banks, such as Standard Chartered, are kicking back at public criticism. They argue total exposure to carbon-intensive sectors in isolation is not a fair reflection on the impact or intention of its climate strategy.

Simon Connell, head of sustainability strategy at Standard Chartered, says TCFD figures do not capture transition financing, reflecting a broader industry-wide concern with how to measure and interpret the flow of capital used to get so-called brown companies to become green.

“This is a challenge for the industry, to create a common definition and understanding of what transition financing is,” he says.

Standard Chartered argues the transition finance gap is the biggest obstacle to achieving net zero by 2050. Its recent Zeronomics report, a survey published by the bank in March, shows 85% of companies require medium or high levels of investment to transition to net zero, rising to 91% of carbon-intensive companies. They can’t just turn the financial taps off.

As such, promoting and standardising transition finance is a core part of Standard Chartered’s strategy. Hanna wrote to the European Commission last year to call for greater clarity and precision on the transition element of the EU taxonomy. It will later this year publish transition pathways for eight carbon-intensive industries.

The bank’s logic is not without merit. Financing to carbon-intensive sectors will need to rise rather than fall to help companies meet net zero, meaning the fossil fuels financed figure is a poor indicator of the bank’s climate policy.

“If we are measuring climate impact, which is what we are really trying to do, this is the single-figure number.” Simon Connell, Standard Chartered

The use of warming-potential metrics is a more helpful and more intuitive measure, says Connell. “If we are measuring climate impact, which is what we are really trying to do, this is the single-figure number.”

For the bank, this means helping its clients reduce their emissions from a projected average temperature alignment of 3.14°C by 2030 – broadly in line with the current global emissions trajectory – down to 1.5⁰C, according to the bank’s 2020 TCFD report.

Accounting transparency aside, Standard Chartered recognises it stills needs to take a hard line. It ceased providing financial services to four clients by the end of 2020 because they were 100% thermal coal-dependent.

As of 2030, Standard Chartered will no longer provide financing to clients that have more than 5% direct revenue from thermal coal, mining, power generation and trading. Interim targets show exactly how it plans to reach this goal.

“It is a bit of a carrot and stick approach,” says Connell. “We are ready and waiting [to help clients transition] but if you are not meeting these diminishing thresholds over time, we have to have an honest conversation,” he says.

While it does not yet have in place a clear strategy to manage and ultimately reduce the emissions linked to its financing, the bank is working to integrate temperature alignment with client transition scores to carve out a clear pathway to net zero.

“At this point our commitment to be net zero by 2050 is exactly that: commitment,” says Connell. “We haven’t put the architecture in place. We’re very much framing it as a consultation and engagement exercise.”

There are also broader structural issues at play that restrict the bank’s ability to drive change.

First is corporate apathy. The Zeronomics report, which covers Standard Chartered’s footprint markets though not necessarily its clients, reveals a worrying lack of alignment by corporates and investors with the ambitions of the Paris Agreement.

For Standard Chartered’s most senior sustainability bankers, the findings of the report were no surprise and validate the view that bank financing alone will not be enough.

“We can sometimes overestimate the power of capital,” says Connell. “A bank on its own will not compel a client to do something, it will act in concert with the various other forces acting on the client.”

Almost two-thirds of the 250 companies Standard Chartered interviewed do not see net zero as a commercially viable position.

Almost two-thirds (64%) of the 250 senior executives interviewed do not see net zero as a commercially viable position. Over half of those surveyed (53%) say that their organisation does not fully support the aims of the Paris Agreement.

As such, while most companies intend to transition to net zero by 2050, many have taken no action to get there and most are delaying plans by at least ten years: 71% intend to make the most progress towards net zero between 2030 and 2050.

To put this in context, research by the Intergovernmental Panel on Climate Change (IPCC) shows net carbon emissions must fall by 45% from 2010 levels by 2030 for the world to stay on track. If businesses fail to act, arresting the very worst effects of climate change will be impossible.

On the investor side, emerging markets remain a blind spot for many investment funds, and transition finance is deemed too risky by many, despite the billions of dollars now aligned with ESG objectives. Standard Chartered’s survey of the world’s largest asset managers found last summer that only 13% of their $50trn of investment is SDG-linked.

“We’ve certainly seen the growth of ESG-focused funds, but they won’t necessarily be able to buy transition finance, so we need to see a growth of transition capital sources,” says Hanna. “How can we make sure that capital flows to transition activities? One of the things that would help would be to have a transition taxonomy.”

Political leadership (a lack of)

Another issue for the bank – and a part explanation for corporate inaction – is that many of the economies in which it operates have not yet adopted net-zero commitments or have policy frameworks in place to support the transition. For clients in those markets, the challenge is more acute.

The bank’s largest markets by income are Singapore and India, while “Greater China” and north Asia represents its largest region. More than 95% of India’s power emissions come from coal, with demand for energy growing. While the government has committed to creating 40% of its energy from non-fossil fuels by 2030, transition to renewable energy faces many challenges, from cost to grid stability.

Asking clients to make commitments that go above and beyond those set by their national governments is difficult.

“It is not just about the deployment of capital, it is about creating the enabling conditions for policymakers and regulators,” says Connell. “It is about raising awareness with those clients who are not quite there at the moment.”