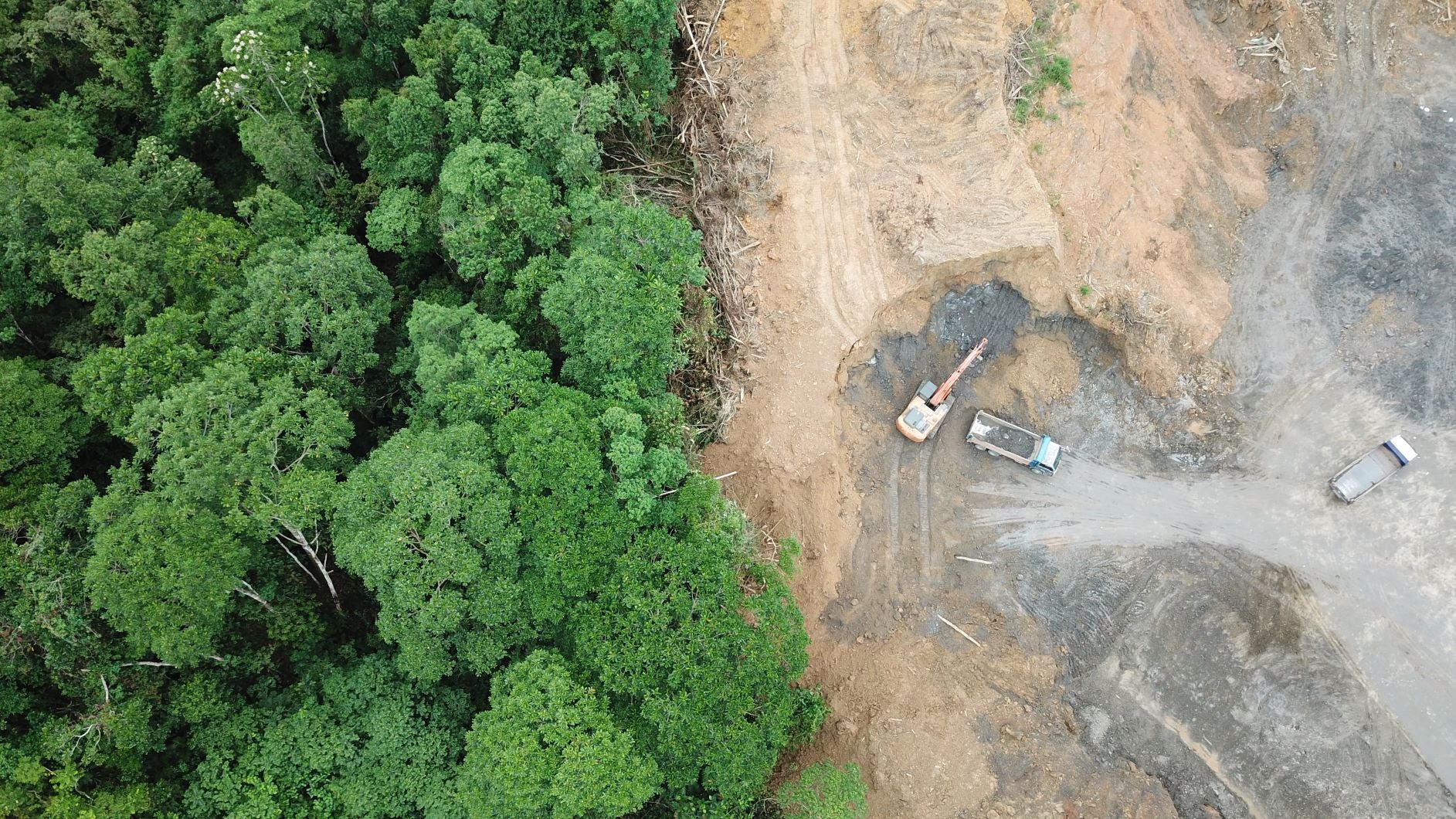 The protection of life on land is not a priority for many influential investors. (Photo by Rich Carey via Shutterstock)

But it’s not only at a political level where urgency in protecting biodiversity is low on the agenda. The UN Sustainable Development Goal (SDG) that targets biodiversity – SDG 15: Life on Land – receives relatively little attention generally. Despite being considered by experts as the second most important of the 17 SDGs, it is where “society’s level of achievement has lagged the most”, concludes the insights and strategy consultancy Globescan in its 2021 report on the subject.

SDG 15 is focused on protecting, restoring and promoting the sustainable use of terrestrial ecosystems, and sustainably managing forests, combating desertification, and halting land degradation and biodiversity loss.

According to the UN’s 2020 SDG report, the world is falling short of targets to halt biodiversity loss, while forest areas “continue to decline at an alarming rate”, driven mainly by agricultural expansion. Considering the financial and ecological risks posed by biodiversity loss, SDG 15 is clearly not a top priority for investors, as lobby group ShareAction revealed last year in a landmark report.

Despite this lack of engagement, financial exposure to SDG 15 is somewhat ubiquitous; many companies indirectly contribute to deforestation because the extraction of palm oil, soy, beef, leather, timber, and pulp and paper sits in their supply chains.

In its 2021 report, ‘Time for Change: Delivering Deforestation-Free Supply Chains,’ Forest 500 – a project run by UK NGO Global Canopy – discovered that out of the 500 most influential companies and financial institutions in key forest-risk supply chains, less than half had published a deforestation policy for any of the related commodities to which they are exposed. About six in ten (95 out of 150) financial institutions with the greatest influence on deforestation hadn’t published a deforestation policy relating to their financing activities.

Forest 500 ranks companies with exposure to at-risk forests in their supply chains based on indicators such as: commitments to achieve deforestation-free production, whether they are signatories to initiatives seeking to end or reduce soft commodity-driven deforestation, and their awareness of the importance of protecting forest ecosystems.

Big brands in the report include fashion group Capri Holdings and food-and-beverage company Yakult Honsha. They are among the three most influential companies in forest-risk supply chains to have made no deforestation commitments.

Even more directly, investors contribute to potential deforestation through their exposure to companies involved in the upstream segment of the beef, palm oil, pulp and paper, rubber soy or timber supply chains in South East Asia, major parts of Africa and Brazil. The Forests & Finance coalition of campaign and research organisations refers to such locations as “tropical forest-risk sectors”.

2020 data from Forests & Finance shows that large amounts of financing from more than 2,000 investors has been funnelled into 300 companies directly involved in forest-risk sector supply chains and whose operations may impact natural tropical forests in South East Asia, Africa and Brazil.

Capital Monitor explored the financing of the largest investors that also feature in ShareAction’s ranking of asset managers for their approaches to responsible investment. We found that a handful of these investors are some of the largest shareholders in the at-risk forest economy.

BlackRock, Dimensional Fund Advisors, Fidelity Investments and Vanguard are four of the ten largest investors into at-risk forest companies in South East Asia, Central and West Africa, and Brazil, with shareholdings in these companies worth billions of dollars. Most of these funds are passively managed, and their exposure reflects the composition of the indices they invest in.

On the back of those findings, Capital Monitor analysis found that BlackRock, Capital Group, Fidelity and Vanguard have significant stakes in six of the largest companies with direct exposure to at-risk forest companies. All of these corporates have deforestation policy scores of 50% or lower.

Due to varied reporting, it’s hard to make an exact assessment of investor approaches to SDG 15. But going by both biodiversity scores and deforestation policies as a proxy, it becomes clear that investors with the biggest stakes in the forest-risk sector are performing well below average in terms of both their deforestation policies and responsible investment practices.

As a broad gauge, ShareAction provides each asset manager with a percentage score range for biodiversity based on its survey referenced earlier. There are eight scoring categories, with 0>12.5% the lowest and 87.5>100% the highest. None of the asset managers that make up the top investors in at-risk forest companies scored higher than the third lowest: 25>37.5%.

In addition to ShareAction’s rankings on biodiversity commitments, Capital Monitor included Forest 500’s deforestation policy rankings of these asset managers with the largest exposure to the at-risk forest industry.

Indicators here include whether the financial institution has an overarching commitment to remove or reduce the amount of deforestation caused by companies in their portfolio, a clear statement of intent to tackle deforestation and their awareness of the impacts of deforestation. These are split into four categories, which are each awarded points that are added together to create a final percentage score. Rabobank returns the best score (72%), whereas a handful of investors, including Capital Group and Fidelity Investments, score 0%.

To underline, between 2012 and 2020, BlackRock and Vanguard voted against or abstained from all 16 shareholder resolutions calling for action on deforestation, according to a report published in September last year by Profundo, a not-for-profit firm providing research and advice on sustainability.

Since the Profundo report came out, BlackRock says it has stepped up its stewardship practices in this field, citing the backing of a shareholder proposal asking consumer products group Procter & Gamble to report on deforestation in its supply chains. It is also taking steps to tackle SDG 15, which it explicitly references in its March 2021 report concerning natural capital.

Worryingly, there are also cases where a financial institution has a strong deforestation policy score but continues to finance at-risk forest companies, calling into question the efficacy of those policies or the scores given. A prime example is Deutsche Bank, which has the second-highest policy score of all investors for which there is financing data but is the 32nd largest financer of at-risk forest companies out of a pool of 2,000.

ShareAction’s biodiversity ranking indicates a few investors are performing relatively well with regard to biodiversity. BNP Paribas Asset Management and Robeco are the only two that score more than 75% for their responsible investment approach to this area.

Robeco said last year it is focusing its engagement "on the impact on biodiversity of deforestation that is linked to five high-risk crop commodities". BNP Paribas Asset Management says its investment policies specifically targeting SDG 15 include aiming for relevant companies in its portfolios to "comply with no deforestation, no peat and no exploitation commitments".

Another standout example of an investor taking a strong stance on SDG 15 is Axa Investment Managers. The French firm's SDG 15 policy is to exclude from its portfolio companies that don’t comply with sustainable standards in the palm oil industry.

Virginie Derue, head of ESG research at Axa Investment Managers, tells Capital Monitor: “It is essential to have in mind that biodiversity is a systemic risk and of equivalent significance as climate change. Recent research has shown that the costs related to natural ecosystems degradation represent more than $5trn a year for the global economy in the form of lost natural services. The rehabilitation of ecosystems is a long process and, in some cases, may even not be fully possible.”