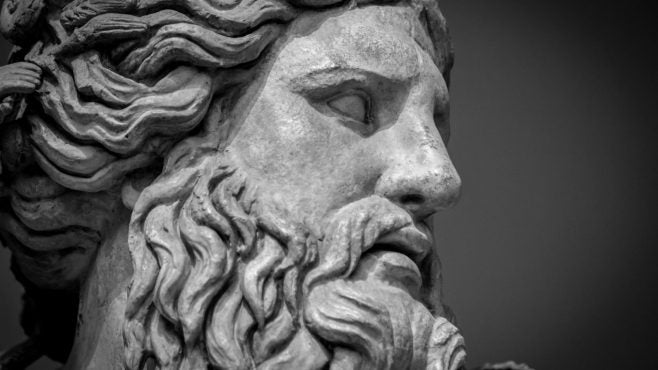 The downfall of MPT is equated to the tale of how Zeus kills his own father. (Photo by Gilmanshin via Shutterstock)

It’s not often you will be given the chance to take down an investment philosophy that has underpinned the development of the world’s capital markets for decades. In many ways, Moving Beyond Modern Portfolio Theory – Investing That Matters does this quite brilliantly. In fact, the simplicity of the book’s central argument makes you wonder why it hasn’t been done before.

Jon Lukomnik and James Hawley, academics with practical involvement in the capital markets, provide an instructive, crisp and lively position arguing that MPT, or modern portfolio theory, has ended up being devoured by its own success. Running through the 111-page book are references to the Greek mythic tale of how Zeus defeated his father Cronos, who ate his children in a bid to prevent the prophecy of his death coming true.

MPT came into being after it was pioneered by Harry Markowitz in a paper published in the Journal of Finance in 1952. He was later awarded a Nobel Prize for his work on the subject. To put its influence into context, the authors argue that near enough $100trn in capital that’s professionally managed today has MPT as a core tenet of the strategies employed.

In essence, MPT argues that an investor can construct a portfolio of multiple assets to achieve the greatest returns for a given level of risk. In turn, given a desired level of expected return, an investor can put together a portfolio with the lowest possible risk. Through diversification, an investor can benefit from the potentially greater gains delivered by riskier assets, while mitigating against the implied risk that these securities add.

MPT also states investors are incapable of escaping the impact of systemic risk. In other words, while you can find ways to defend against the oddities of a particular stock, you must surrender to the social, environmental and financial systems risk posed to your portfolio.

One feeds off the other

It is this belief that the authors refute in this book, arguing that there is a “symbiotic” relationship between the two. One categorically affects the other, and to think otherwise is “just plain wrong”.

One key argument for this is the ascent of index funds – low-cost investment vehicles that track the market without attempting to beat it – which has created a market of hugely influential asset owners that are plainly not “market takers”, but market makers. In other words, their sheer size is a direct influence on the financial system in which they exist. The more you blow air into a balloon, the bigger it gets.

MPT treats investing as a bloodless discipline, divorced from the real-world messes like financial crises, income equality, and global warming.

As Lukomnik and Hawley describe it: “MPT treats investing as a bloodless discipline, divorced from the real-world messes like financial crises, income equality, and global warming.”

Hindsight is a beautiful thing, but, as damning as the above description is, the two make clear that the world has a lot to thank MPT for. A philosophy of its time, it engendered the creation of index funds, which in turn helped drive the growth of the mutual fund industry, on the back of which the retirement and savings sector thrived.

But, combined with a fatal short-sightedness within its internal logic – what Lukomnik and Hawley call the “MPT Paradox” – the theory’s success is precisely the reason it cannot solve the real-world problems we face today, such as climate change. The authors argue that a puritanical adherence to MPT must be condemned to the graveyard of economic thinking – investors need to “evolve”.

The MPT Paradox described by the authors is an equally compelling counter to the theory’s hermetic characteristics. MPT’s obsession with focusing on diversifying the risk found within individual stocks and bonds (idiosyncratic risk) and by denying that an investor can influence systemic risk, means that systemic risk will loom ever darker over a portfolio.

This is where Lukomnik and Hawley land a killer blow to MPT. While many may still ascribe to the theory, a glimpse into the history of investor engagement proves that some allocators have already moved beyond its intellectual limitations and can directly point to the financial success of doing so.

A recent, but very useful, example of this can be found in the creation of the Boardroom Accountability Project (BAP) in 2014, the brainchild of New York City comptroller Scott Stringer. Frustrated by the inability of shareholders to directly nominate corporate board members, Stringer combined the collective strength of the pension funds he oversaw to gain proxy access to 75 companies they believed were not tackling various systemic risks, such as exposure to fossil fuels. With some regulatory buy-in to boot, the announcement alone caused the same companies to witness a “53-basis point excess return”.

Beta actvism is the new Zeus

In fact, many investors have not fully applied pure MPT for quite some time; a new form of investing was born years ago – it just hadn’t been given a formal name until recently. That is “beta activism”, whereby investors try to enhance the risk/return of a market through active engagement with the companies they own.

The book delivers an insight into the influence that beta activism is now having on our environment and societies.

Beyond their rather elegant deductive reasoning, Lukomnik and Hawley provide a very useful potted history of the rise of MPT and, by dint of its success, its inevitable downfall, at least in its most distilled form. The book, as the title implies, moves beyond MPT to deliver an insight into the influence that beta activism is now having on our environment and societies.

Examples include the development of numerous climate-related accounting standards, which seek to inject transparency into everyday reporting of ESG factors that could have a material difference on a company’s future performance.

Although still very much a work in progress, this approach, again, clearly shows how investors are demanding more information that they believe will help them mitigate systemic risk. The authors define the development of new investment tools to establish that information as third-stage governance.

And although much more research is required to support what is a compelling position, the duo believes that third-stage governance has created up to $5trn in global wealth already and implore investors to do their “part” to ensure that trillions of dollars of wealth are created by applying beta activism. In keeping with the Greek mythological theme, Zeus is now more powerful than Cronos.

Markowitz could not have predicted the influence his theory would have on the markets – and the proliferation of data and the technological power needed to support it would also have on his own world view. However, as flawed as the model evidently is, those flaws only started becoming apparent as its implementation spread further across the investing world. The children of Markovitz began devouring the father.

In a rather neat irony, the effectiveness of third-stage governance/beta activism may well require the same level of fervent commitment that drove MPT to prominence  – and which led to that theory’s failures.

This leads to the inevitable question: what child will end up eating beta activism down the road?

Moving Beyond Modern Portfolio Theory – Investing That Matters by Jon Lukomnik and James P. Hawley is available through Routledge.