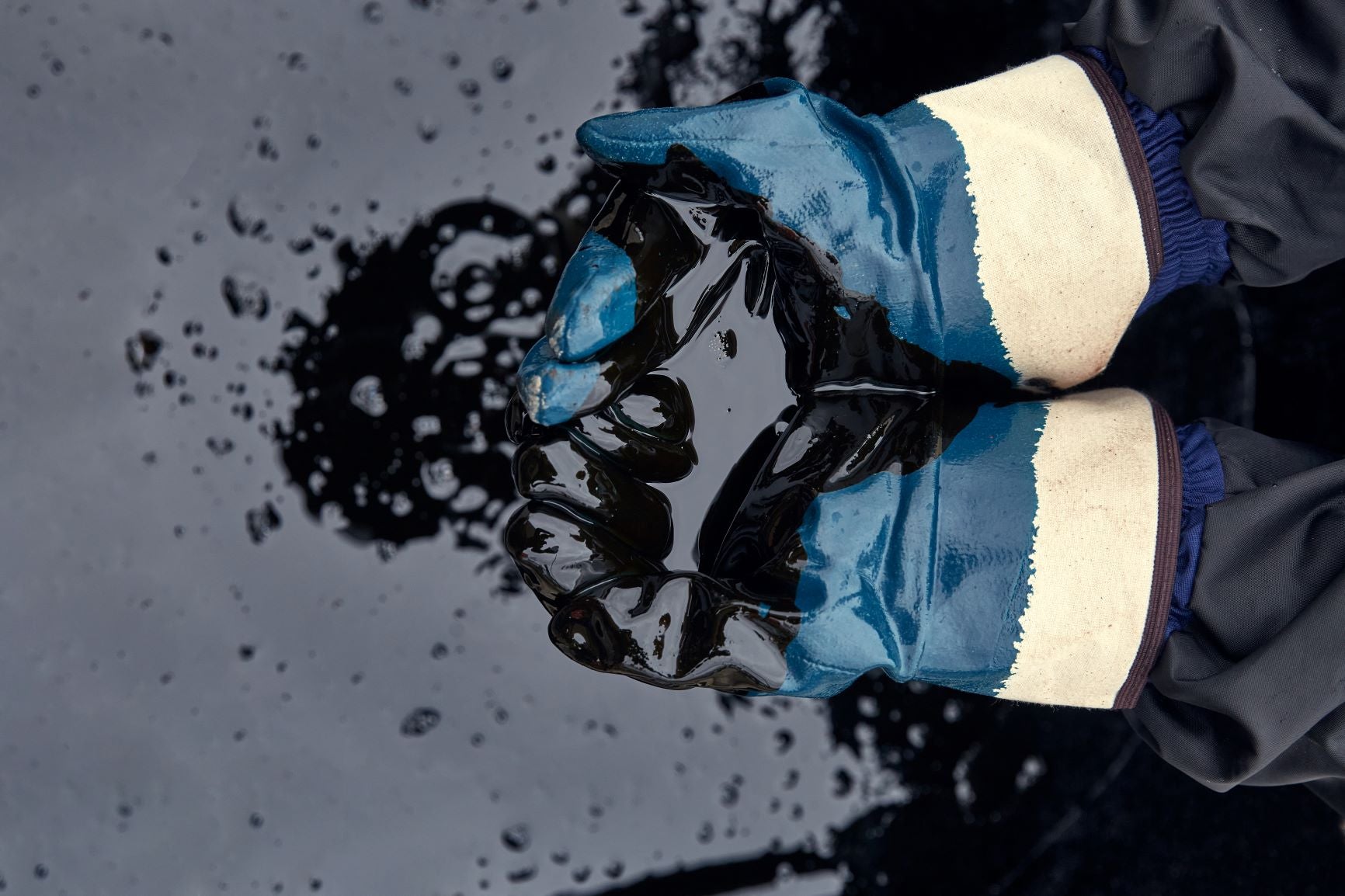 Oil on their hands? Despite admitting they need to factor in the new IEA report, many insurers are not prepared to commit to ceasing oil and gas underwriting before 2022. (Photo by Kirill Gorshkov via Shutterstock)

If there ever was an image that perfectly encapsulated the potential for fossil fuels to harm the natural environment, it might be the widely circulated photo of the sea ablaze in the gulf of Mexico on 2 July, following a gas leak at an underwater pipeline owned by Mexico state oil company Pemex.

Activists were quick to draw the connection between the disaster and Pemex’s insurers, such as Mapfre, which provides coverage that enables such projects to exist. Although Mapfre recently adopted new commitments to exclude tar sands and Arctic oil and gas production from its insurance business, it has no such restrictions on conventional oil and gas.

Mapfre is not unusual. While the past few years have seen a host of insurers exiting the coal industry (at the time of writing, at least 30 major insurers have restricted insurance services for coal), only 11 have similar restrictions for tar sands projects. To date, only Suncorp and Generali have stopped covering new oil and gas production entirely.

Simple: No more oil and gas

Until very recently, gas was considered a source of energy that could carry us smoothly in the transition from fossil fuels to clean energy. That thesis collapsed in mid-May this year, when the International Energy Agency (IEA) issued a death warrant in its ‘Net Zero by 2050’ roadmap report with its assertion there can be no new oil and gas projects developed from the end of this year if we are to stop global temperature rising above 1.5°C.

The IEA points out that CO2 emissions from natural gas combustion are expected to increase by more than 215Mt of CO2 in 2021, to reach a high of 7.35Gt of CO2, accounting for 22% of global CO2 emissions.

The report drew a mixed response. A number of oil and gas industry groups contested the findings, which were celebrated by activists, who have been calling for a cessation to new oil and gas developments for years. In June, UN secretary-general Antonio Gutteres weighed in on the debate pleading with the insurance industry to stop underwriting new oil and gas projects. Until now, the industry’s leading insurers have remained largely silent on the matter.

Capital Monitor set out to ask the major insurers of the oil and gas sector a series of questions in a bid to establish their current thinking on the IEA’s top findings.

Identifying the companies is tricky, as data on who insures what is not available publicly. As such, we based it on the findings of a report published last year by Insure Our Future, a global coalition of NGOs that aims to force insurers to stop underwriting oil and gas. In turn, Insure Our Future worked using reports from consultancy agencies Finaccord and HTF Market Intelligence.

This research, paired with information from Orbis Research seen by Capital Monitor, gives an indication of the size and scope of the oil and gas insurance underwriting industry, which in 2020 was valued at $18.5bn, and where the cumulative market share of the six major players is more than half (55%).

Capital Monitor approached all 20 of these insurers, plus Aviva and Scor, which are broadly influential in the marketplace and have exposure to oil and gas. It asked whether or not they accept the findings of the IEA report, and if so, whether they’ll be amending their policies accordingly by the 2021 deadline proposed.

The seven insurers that responded were Axa, Allianz, Aviva, Intact, Scor, Swiss Re and Tokio Marine. With the exception of Intact and Tokio Marine, they are also members of the Net-Zero Insurance Alliance (NZIA), a collection of insurers and re-insurers committed to individually transitioning their underwriting portfolios to net-zero greenhouse gas emissions by 2050.

AIG, Endurance, Liberty Mutual, Mapfre, Munich Re and The Hartford declined to respond to our questions. We were unable to obtain any response from Berkshire Hathaway, Chubb,   Great American Insurance, Lloyds, PICC, Starr, Travelers, WR Berkley and Zurich by our press deadline.

Of the seven that did respond, all except Intact acknowledged in some part the major findings of the IEA. However, no insurer was prepared to say it was committed to ceasing oil and gas underwriting by the end of the year.

Below is a precis of the some of the responses. We chose not to incorporate Intact's response as the insurer failed to directly answer questions related to the IEA report. A spokesperson for Aviva said the insurer welcomes the IEA report but was unable to provide any further commentary by deadline.

Allianz: A spokesperson from Allianz said it was “commendable that the recent [IEA] report” sheds light on the fact developing new oil and gas fields is not compatible with temperature goals, but the insurer declined to comment on future plans other than to point Capital Monitor to its 3 May announcement committing to further tighten its coal phase-out pathway “both in scope and depth because most recent climate models require an accelerated path towards a low-carbon economy”.

The spokesperson added: “If companies do exceed one or more of these defined thresholds but present a credible and public strategy to transition away from coal at a pace which is compatible with the scientific pathways of limiting global warming to 1.5°C and is confirmed by independent third-party performance assessments, Allianz can exempt them from restrictions.”

Axa: In February this year, Axa told S&P Global Market Intelligence it had not stopped insuring oil and gas infrastructure because "most climate scenarios see space for oil and gas," but Capital Monitor understands that position is under review since the IEA report came out.

Axa was one of the first insurers to adopt underwriting exclusions on the most polluting fossil fuels, including coal, tar sands and Arctic drilling. Céline Soubranne, the group’s corporate responsibility officer, indicated it may extend this soon to oil and gas, although she would not confirm that this was the case.

Soubranne said: “I think one of the key takeaways [from the report] is that we will collectively need to reassess our whole approach to energy to further drive the transition of our economies… We will take into account the new IEA report when re-assessing our energy policies. However, we want to take into account energy as a whole – not just exclusion, not just oil and gas; it’s also about how we push alternatives.”

Soubranne is referring to Axa’s green investment strategy detailed in its 2021 climate report, an 82-page document released on 21 June, which includes the "warming potential" of the group’s investments, which is currently at 2.7°C – well below the market’s potential of 3.2°C.

The report mostly focuses on Axa’s investments, including commitments to align its portfolio with a 1.5°C trajectory, and while it includes multiple references to the IEA roadmap, its fossil fuel underwriting restrictions appear largely unchanged from 2019.

Scor: A spokesperson from Scor said that while it “accepts the IEA premise that there are already sufficient oil and gas reserves to supply the ongoing need for fossil fuels over the coming decades”,  it also “recognises that in practice the pathway that the world actually follows will depend on many factors, including for example future policy decisions on carbon pricing and fossil fuel subsidies by governments around the world”.

The spokesperson added that while “there will certainly be a role for more restrictive underwriting policies and guidelines on that journey”, the company also believes that “active engagement with our clients that are committed to decarbonising their business models will ultimately support a faster and more orderly transition for society as a whole”.

Swiss Re: As well as accepting the findings of the report, a spokesperson from Swiss Re pointed to its recent oil and gas policies, which were announced in March this year.

“From this month Swiss Re will therefore no longer provide individual insurance covers for those oil and gas companies that are responsible for the world’s 5% most carbon-intensive oil and gas production,” the report stated.

Tokio Marine: A spokesperson for Tokio Marine Group was more circumspect about the IEA’s net-zero ambition, pointing out that “if there is a consensus made among stakeholders including governments, companies, as well as NGOs, to work in line with this scenario, we expect that net zero can be realised accordingly.

“To be more specific, we use RCP (Representative Concentration Pathways) scenarios (RCP2.6, 4.5, 6.0, 8.5) by the IPCC [Intergovernmental Panel on Climate Change] as a reference for the physical risk impact of insurance underwriting. Also, we use [the] World Energy Outlook, Sustainable Development Scenarios, and Energy Technology Perspectives… by [the] IEA as a reference for the transition risk impact of investments.”

Lindsay Keenan, European coordinator of Insure Our Future, was unimpressed by the responses.

"Despite the science evidence, their own knowledge, the IEA report and the positive-sounding initiatives they sign up to, there remains a significant gap in terms of the urgency of action by all members of the re/insurance sector and in particular by companies including Axa, Allianz, Munich Re and Zurich, who are among the top oil and gas property and casualty insurers internationally… They should immediately stop underwriting new coal, oil and gas production. It really is that simple.”

Keenan adds: “As for companies who have no comment on whether or not they accept the IEA report findings, I have no comment that would be printable, and you can quote me on that."

Peter Bosshard, finance programme director at the Sunrise Project, a network of activists who wish to drive the transition from fossil fuels to clean energy, says: "The IEA has been unambiguous in its finding that there is no space for any more oil and gas projects. Engaging oil companies and promoting positive alternatives are worthwhile efforts, but they have no excuse for continuing to insure new oil and gas projects.

"We expect insurance companies to follow the science and stop insuring new fossil fuel projects by the time of the Glasgow COP [UN Climate Change Conference, to take place in November this year] at the latest or they will lose their climate credibility very quickly."