The relative in the attic that most agricultural commodity producers don’t like to acknowledge is palm oil.

The fruit of the tropical palm tree is one of the world’s most versatile ingredients. It is used in everything from baked goods and shampoos to frying oils and ice cream. Around half of the products that consumers use every day contain the ingredient, estimates Australian pressure group Palm Oil Investigations.

That success has created an ecological disaster. Growing reliance on the ingredient has driven a quadrupling in its global production, from 15.2 million tonnes to 62.6 million tonnes in the decade to 2015. This has had a marked impact on carbon emissions and on deforestation in Africa, Indonesia and Malaysia.

For some companies, the answer has been to brush the issue under the carpet. In Britain, supermarket chain Iceland removed its branding from items that contain palm oil, rather than the ingredient itself.

Asian agribusiness conglomerate Olam International has taken a different approach. Based and listed in Singapore, the group is open about its sustainability aims and seeks to show that this is much more than either lip service or greenwashing.

For the past decade, Olam – 54%-owned by Singapore state fund Temasek, with Japan’s Mitsubishi Corporation holding a 17% stake – has sought to highlight that sustainability has sat alongside long-term shareholder value as one of its main objectives. In addition, Olam’s co-founder and chief executive, Sunny George Verghese, is the chair of the Geneva-based World Business Council for Sustainable Development.

The company is also known for its pioneering green financing structures, supporting local farmers and other communities in the geographies in which it operates – as will be explored later in this article.

“[Such activity is] not a fashion; it is the right thing to do,” Neelamani ‘Muthu’ Muthukumar, managing director and chief financial officer of Olam, tells Capital Monitor. 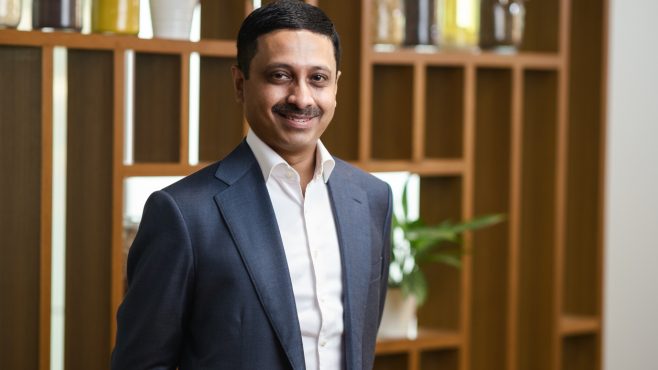 The company’s only holding in the palm oil sector is Olam Palm Gabon, a 60/40 joint venture with the Republic of Gabon. It operates two palm oil mills – one kernel crushing plant, and an edible-oil refinery producing cooking oil and soap – to which it intends to add a third mill later this year and a biodiesel refinery to help the country diversify from fossil fuels.

Muthu adds that while the World Bank’s private sector arm, the International Finance Corporation (IFC), halted all palm oil investments in 2009, the only projects in the industry it has approved are those related to Olam’s plantations. Moreover, he says, its 25,000ha (62,000 acres) of plantations are all 100% certified by the Roundtable on Sustainable Palm Oil (RSPO), a global standard.

Darrel Webber, chief executive of the RSPO, calls Olam’s plantations “the gold standard for sustainable palm oil in Africa”. Its plantations were also the first in the industry to have been independently assessed as climate positive, and it releases regular updates via the RSPO website about its palm investments, says Muthu.

But not everyone is sold on these credentials.

Uruguay-based international initiative the World Rainforest Movement (WRM) has accused Olam of taking advantage of loopholes in its zero-deforestation commitments. Its allegations were based on a publication released in February last year, which came out of a field study in and around the company’s four concession areas in the province of Ngounie, in Africa’s Gabon.

International initiative the World Rainforest Movement has accused Olam of taking advantage of loopholes in its zero-deforestation commitments.

Then in August, German non-profit organisation (NGO) the Forest Stewardship Council launched an investigation into the agribusiness’s palm oil plantations.

Olam has rejected WRM’s main allegations – deforestation within traditional communities, expansion into village lands against the consent of the communities, and that it had not fulfilled its promises to support these villages – as “false and unfounded”.

But WRM remains unconvinced. “First of all, the damage [created by] Olam’s deforestation of thousands of hectares of forest to set up the main part of their plantations remains there and it cannot easily be cleared,” says WRM international coordinator Winnie Overbeek.

“Maybe in Olam’s chief executive’s imagination it can with some zero-deforestation documentation,” she tells Capital Monitor, “but not for communities on the ground facing the daily impacts of this huge socio-ecological damage done to them and to an entire region.”

Of course, Olam is not the only agribusiness to have come under fire for its palm oil operations.

Wilmar International, a Singapore-listed peer of Olam and the world’s largest refiner and trader of palm oil, was slammed earlier this month for its connections with Astra Agro Lestari, a palm oil subsidiary of Indonesian conglomerate Astra International.

While Olam has tried to engage with the industry, Wilmar has shied away. Last year, it left the steering group of High Carbon Stock Approach, a Malaysian methodology and toolkit that sets the standard approach for tackling deforestation on the ground in tropical, moist, forest landscapes.

While Wilmar posted its highest-ever quarterly profits at the end of April, analysts are increasingly flagging palm oil as an issue for the company. Thilan Wickramasinghe, an analyst at Maybank Kim Eng, warns that “activism due to ESG-related issues can have a material downside impact”.

Adding credibility to Olam’s claims of sustainability is the fact that it has been hitting the capital markets with sustainable deals since 2018 and has raised $3.4bn, including $2.2bn in the past 12 months alone.

While peers such as Wilmar have printed sustainable bond after sustainable bond, Olam has executed a variety of different structures. The amount of green funding raised by the latter has risen steadily, from $663m in 2018 to $1.45bn this year, with South East Asia a key focus.

Olam only issued its first sustainable bond in December. Despite its unrated status, it made a Y7bn ($67m) 2.05% five-year sustainability-linked private placement to Development Bank of Japan (DBJ).

Before entering the public debt market, however, Olam had obtained financing via various other sustainable deals.

At the end of March, it secured a heavily oversubscribed $1.45bn multi-tranche loan facility from a large group of 18 lenders linked to AtSource, the ‘sustainability insights’ platform it set up in 2018.

This followed other transactions last year.

At the end of April 2020, Olam raised a $176m term loan to support access for farmers in Indonesia, Papua New Guinea, Timor Leste, Uganda and Vietnam. The lenders were the IFC and the Japan International Cooperation Agency (JICA).

Then, in June, Olam agreed a three-tranche $250m revolving sustainability-linked credit facility with an interest margin linked to sustainability performance indicators. These will be assessed by consultancy EY for their level of support for farming communities.

Later that month, Olam signed a one-year US dollar/Thai baht foreign exchange forward via Deutsche Bank that includes a discount on the forward if the company strengthens supply chain sustainability.

Subsequently, in August, Olam refinanced a $150m loan from the European Bank for Reconstruction and Development (EBRD) with a $200m two-tranche term loan. The aim was to help implement the recommendations of the Taskforce for Climate-related Financial Disclosure in Olam’s businesses across Turkey and Egypt.

Adding credibility to Olam’s claims of sustainability is the fact that it has been hitting the capital markets with sustainable deals since 2018.

And in December it secured a $93.75m three-year medium-term loan from the Asian Development Bank (ADB) to provide working capital to buy agricultural commodities from smallholder farmers in Indonesia, Papua New Guinea and Vietnam.

ADB sees the loan as an efficient way for it to counter the particularly big impact of the coronavirus pandemic on smaller farming operations.

But given the more favourable borrowing terms that green structures can offer, it is natural to ask whether Olam is going down this road simply to lock in cheaper funding. Muthu shakes his head vehemently, saying the financing is linked to strategy.

“We want to be commercially competent; there is no question about that,” he adds. “If you have to do [green funding] just because it is cheaper, then there is a lot of reputational risk attached if you don’t achieve the B2B [business-to-business] commitments that you make.”

This point was echoed by a Singapore-based ESG specialist at an international bank who has worked closely with the company.

Olam is, of course, incentivised by the cheaper cost of borrowing, he says, but the reputational angle is just as important. “If Olam doesn’t meet its commitments, then I have to go to the market and say that this is no longer an ESG transaction – and that is probably a more important incentive than the rebate,” the banker adds.

Olam certainly appears – like Rome’s airport operator – to be one of the more ethical operators in an under-fire sector. Some of its peers might do well to take a palm leaf out of its book.