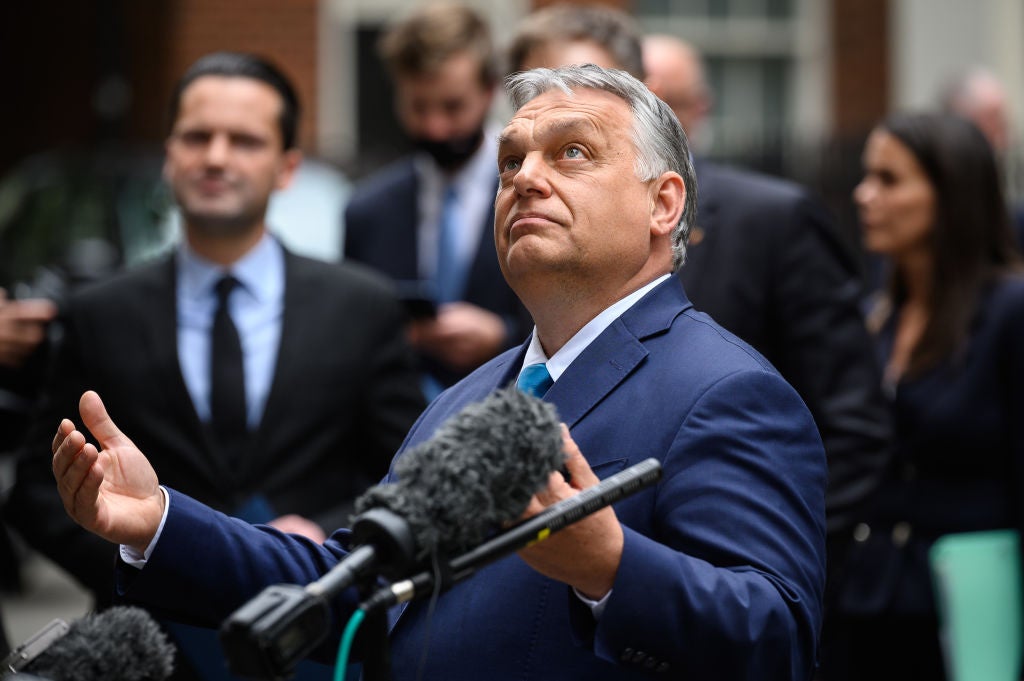 Happy to invest in Hungarian sovereign debt? Prime Minister Viktor Orbán would like to hope so. (Photo by Leon Neal/Getty Images)

Yet the ethical concerns raised by such exposures takes on an additional urgency when the same funds have been labelled as ESG-friendly, with the potential to mislead investors imagining they are greening their portfolios by investing in them.

A Capital Monitor analysis of the 14 government ESG bond exchange-traded funds (ETFs) currently available on TrackInsight’s website found that, by taking the aggregate exposures of the top ten holdings of each of these funds, among them are a host of countries whose ESG credentials are in question doubtful. They include: Saudi Arabia, Kazakhstan, Hungary, Qatar and the UAE, all of which are currently listed as ‘not free’ by human rights campaign group Freedom House. Sovereign bonds from France, China and the US had the largest exposures (see chart below).

Not only does the data point to the potential clash of social and environmental values in ESG investing but just how widely defined an ESG government bond ETF can be.

Of these 14 funds, only one – the Lyxor Euro Government Green Bond – is marked as ‘ESG thematic’, which means that its screening process is focused on one specific theme related to sustainability. In this case, the fund contains green bonds dedicated to environmental projects by tracking the Solactive Euro Government Green Bond Index, which is specifically directed at green bonds issued by European countries that fund projects ‘with positive environmental outcomes’.

The rest are marked as ‘general integration’, which as their label implies, undergo a broader screening process, which can include exclusionary screening in addition to the application of a broader set of ESG criteria.

On closer inspection, one could easily argue some funds appear no more ESG-friendly than their non-ESG counterparts. This raises the question as to whether the broad term ESG is really appropriate for usage in many cases.

For example, the recently launched iShares € Govt Bond Climate UCITS ETF, which tracks the FTSE EMU Government Bond Index, is cited on its website as seeking "to provide a higher exposure to countries less exposed to climate change risks, and a lower exposure to countries that are more exposed to climate change risks". The resulting exposure is 68% treasury bonds, mostly from France (35%) and Italy (29%).

The two ETFs with the greatest exposure to bonds from sovereigns considered ‘not free’, based on Freedom House’s definitions, are Legal & General’s ESG Emerging Markets Government Bond fund, of which the three largest portfolio holdings include Romania (2.6%), Kazakhstan (1.8%) and Hungary (1.73%), as well as its ESG China Bond ETF, which was this week in the press due to accusations of ‘greenwashing’ from wealth management company SCM Direct.

Capital Monitor spoke to SCM Direct co-founder Alan Miller, who came across the fund recently when looking for a Chinese government bond to invest in, and, in his words, was “quite surprised” to find that the fund was labelled as ESG.

“The more we looked at it, the more astonished we became,” he says, in reference to the fund’s exposure and strategy. A blog post on the SCM Direct website notes that the principles that underlie the UN Global Compact, which are often applied to equity investments, include an awareness of human rights, labour standards, the environment and anti-corruption, cannot be applied to the Chinese state.

The wealth manager also calls out the fund as ‘greenwashing’ due to its holding bonds issued by the exact same entities as non-ESG funds, while claiming to have an ESG ‘tilt’ towards respective weightings to reflect variant ESG scores.

Miller argues that Legal & General (LGIM) could have either produced an ESG version of the fund in a “proper form”, or, if not, kept it as a “non-ESG form of a Chinese government bond fund”, emphasising that its labelling is “very misleading”.

Miller illustrates this argument by pointing out the almost identical performance of the L&G ESG China CNY Bond fund with a different, non-ESG-labelled Chinese government bond fund. Indeed, such similarities can be seen when comparing both of their performances to an entirely different ETF.

LGIM denies claims of greenwashing, with a spokesperson telling Capital Monitor: “We believe that over the long term, allocating proportionately more capital to issuers, whether corporate or sovereign, with better ESG profiles will encourage issuers to prioritise ESG considerations.”

Miller argues that investors should apply a healthy degree of scepticism to all ESG-labelled government bond funds – after all, almost all governments engage in the sale of weapons or other non-ESG-compliant products that would otherwise be excluded from ESG equity funds.

“There are plenty of portfolios that claim to be ESG, and they just hold plain vanilla government bond funds – if that had any merit or logic, then all the government bonds funds could repackage themselves as ESG.”

Apart from two, all of the ETFs are classified as SFDR Article 8, funds that "promote E or S characteristics but do not have them as the overarching objective", while Lyxor’s Euro Green Government bond fund is classified as article 9, meaning it "specifically [has] sustainable goals as [its] objective".

Capital Monitor has previously highlighted asset managers’ frustration with these classifications, and this example of how they are applied across funds that appear very similar in nature to non-ESG ETFs serves as an important reminder that, for investors truly interested in going green, government bond ETFs may not be the best bet just yet.