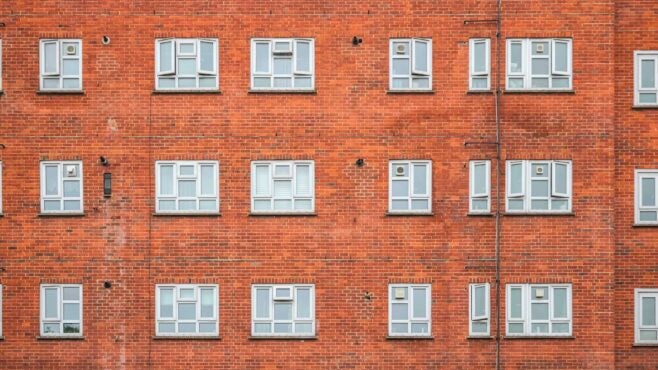 Affordable housing: in short supply in the UK. (Photo by VictorHuang / iStock)

The property sector is an infamously high emitter of carbon, accounting for around 40% of the UK’s total carbon footprint, according to the UK Green Building Council. Britain also faces a severe undersupply of affordable housing, which has been exacerbated by the Covid-19 pandemic.

Real estate developers in the country are seeking to tackle these issues, increasingly by tapping growing investor appetite for green, social and sustainable (GSS) bonds.

Last year, British housing associations issued around £5bn ($6.8bn) in sustainability bonds, according to rating agency Fitch. Sustainability-linked bond (SLB) issuance has been slower to take off, especially in the sterling market. Only £1.75bn has been sold across all sectors since October 2020 across five issues, according to Capital Monitor data (see chart below), as against €27bn ($31bn) in continental Europe.

Demand is likely to grow further for such debt, suggest the findings of a European survey by London-based sustainability consultancy Evora Global published in late January. Of 121 real estate investors polled, 60% said climate-resilient locations and sustainable property management were their most important considerations when considering how to future-proof investments, while 92% regard both of these factors as material for decision-making.

Accordingly, the first sterling-denominated sustainability-linked bond (SLB) from a property company came in mid-January and was two times oversubscribed. The £300m ten-year issue, paying a 2% coupon, was sold by London & Quadrant Housing Trust (L&Q), a not-for-profit provider of social housing with £10.9bn in assets.

The pricing versus L&Q’s previous ten-year bond – sold in February 2018 for £250m 2.625% issue at gilts plus 118 basis points (bp) – suggests it made a saving of 31bp on the funding cost with the latest deal. Based on where that bond was trading in the secondary market, L&Q paid a minimal new issue premium of 2bp.

The new SLB seeks to address both climate change and the shortage of homes in the UK by setting three key performance indicators (KPIs): two environment-related and one based on providing affordable housing.

London-based L&Q, which houses around 250,000 people in 107,000 homes across England, has a track record in sustainability. Rated A3/A-/A+, it was the first UK housing association to take out a sustainability-linked loan (SLL), in June 2018: a five-year £100m deal with a margin linked to getting unemployed residents back into work.

The SLB follows the publication of its sustainability finance framework in early September last year.

Martin Watts, director of treasury at L&Q, says he wanted to “underpin” the company's sustainability credentials. “Sharing our commitment upfront” is a way to show the market that the company is serious about ESG, he adds.

One way it has sought to do that is by agreeing to pay a stiff penalty of 12.5bp annually if it fails to meet a single one of its KPIs. That would equate to 93.75bp in aggregate of additional interest on the notional outstanding, points out Harsh Agarwal, a vice president on the corporate debt capital markets team at BNP Paribas. The French bank is the sole sustainability structuring adviser on the deal and joint bookrunner alongside Barclays, HSBC and National Australia Bank.

A more common SLB structure would feature a 25bp step-up at maturity and different weights to each KPI, meaning it would have to miss all of its targets before having to pay the full penalty.

All three KPIs have short-term targets – under two years – for a reason, says Watts: to avoid accusations of what he calls “jam tomorrow” – a promise that is unlikely to be fulfilled.

Under the first KPI, L&Q intends to reduce Scope 1 and 2 greenhouse gas emissions by 20% by the end of March 2024 from a 2020 baseline of 33 kilotonnes of carbon dioxide equivalent (ktCO2e). That reference point was set because it was the first year for which L&Q had to publish its figures.

The group has also pledged to set targets by 2024 that will define greenhouse gas emissions reduction goals from 2025 onwards and be in line with the 2015 Paris Agreement on Climate Change. It has also committed to achieve net-zero emissions by 2050.

L&Q is following emissions-cutting guidelines issued by trade association the National Housing Federation and is already making progress at several of its sites.

At Barking Riverside in east London, for example, it has installed an Envac automated underground waste disposal system to reduce the 443-acre development’s carbon footprint. And its 137-home Addiscombe Road development in Croydon features a hybrid heating system, that, it says, has slashed CO2 emissions by 35% since 2016 thanks to high-efficiency gas boilers and external air source heat pumps.

I would hope that we are in a position [for future SLB issuance], where Scope 3 emissions is a primary target. Martin Watts, London & Quadrant Housing Trust

Cutting Scope 3 emissions – those generated by the company’s customers and supply chain – does not feature in the KPIs for this bond, but Watts says it will for future debt sales. “We need to look at Scope 3. That’s where the market is going. I would hope that we are in a position [for future SLB issuance], where Scope 3 emissions is a primary target.”

The second KPI is to improve energy usage in homes, based on the British government’s Standard Assessment Procedure (SAP) calculations. These compare energy performance on a sliding scale up to 100: the higher the rating, the more efficient the property in terms of fuel costs and emissions.

This is a challenging KPI, as it covers both new builds and the retrofitting of older housing stock and will mean a big capital commitment, admits Watts. The bond’s prospectus, published on L&Q's website, says it would cost £90m over the next few years to achieve the second KPI. But that is merely part of L&Q’s longer-term investment within a £1.9bn major works programme.

Again, this is a “challenging target”, Watts says, especially taking into consideration market conditions – in particular the “huge uptick in construction inflation” in the past year. But he feels the KPI is achievable given L&Q’s procurement strategies and economies of scale.

L&Q does not receive financial support from the government, so it needs to subsidise the construction of affordable housing using profit made from selling half of the houses it builds. The company says it is on course to hit a 61% target for affordable housing for this year.

This will be a welcome contribution to the UK housing supply. Around 340,000 new homes are needed in England each year, of which 145,000 should be affordable, according to an estimate from Heriot-Watt University, which was commissioned by the National Housing Federation and homeless charity Crisis and appeared in a UK government paper published on 4 February.

L&Q has committed to providing updates on the KPIs annually in its yearly sustainability report, which will be verified by external auditors and published on the group’s website.

The housing trust had planned the deal both to fit its maturity profile and to lock in funding while interest rates were low. It was certainly timely: the Bank of England raised the base rate to 0.5% on 3 February, the day before Watts spoke to Capital Monitor.

Of course, investors will likely find sterling bond issuance – sustainable or otherwise – harder to come by if the Bank of England further hikes interest rates to tackle inflation, as is widely predicted.