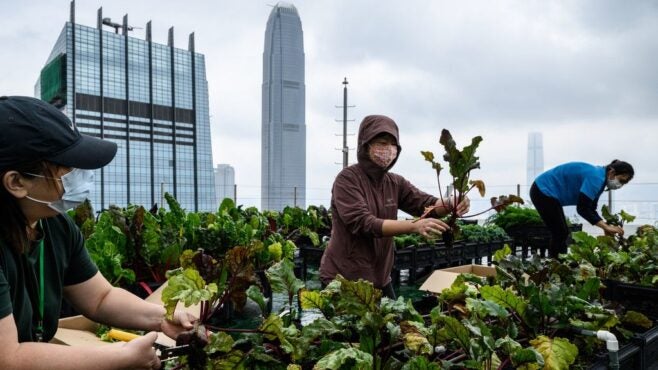 Rooftop harvesting: One of the 60-plus urban farms that have sprouted across Hong Kong since 2015. (Photo by Anthony Wallace/AFP via Getty Images)

Hong Kong is not known as a paragon of sustainability. The Chinese territory features an air conditioning-laden and hugely energy-intensive property sprawl that is among the most densely populated on the planet. That’s not to mention – as is perhaps less well-known – the fact that it imports the vast bulk of its edible produce.

Only 10% of the food – and a mere 2% of the vegetables – consumed by the seven million population is grown in Hong Kong, according to its Agriculture, Fisheries & Conservation Department. The value of crop production amounted to just HK$361m ($46.3m) in 2019, the most recent figures available.

Some have alighted on a way to employ the countless high-rise buildings to help address this issue, however.

The incentive for Fortune Reit to construct the deal in such as way was its social aspect, says Justina Chiu, chief executive of Singapore’s ARA Asset Management. ARA manages the real estate investment trust (reit) and has just been acquired by Hong Kong-based real estate services and investment company ESR, which now has $140bn under management. 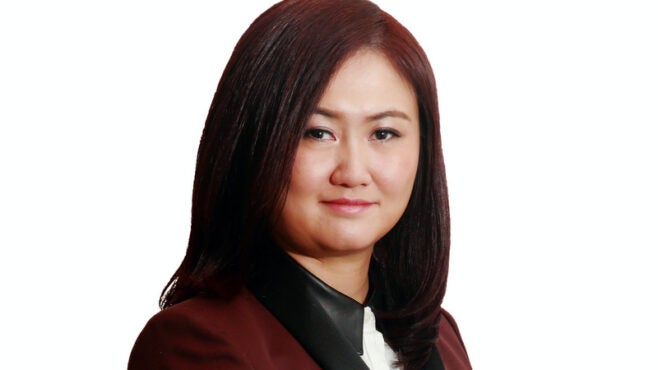 DBS, which has worked with Fortune Reit for more than a decade, proposed building KPIs into an interest rate hedge through which it could gain better terms on the transaction, says Alex Cheung, head of the institutional banking group at DBS Hong Kong.

The deal is a five-year Hong Kong dollar swap, switching from floating to fixed interest rates. Fortune Reit gets a rebate on the cost of the swap if it does a certain amount of community engagement a year – the purpose of the urban farm. DBS will be monitoring the reit’s progress, says Cheung, via regular conversations with Fortune Reit and Rooftop Republic, which project manages Farm@Fortune.

Fortune Reit declined to disclose details on the rebate or on how the amount of community engagement would be measured.

Farm@Fortune, which will grow at least 15 types of organic seasonal crops all year round, completed its first harvest in December. It yielded 32kg of produce, all of which was donated to Food Angel, a food assistance programme in Hong Kong, launched in 2011 by the Bo Charity Foundation.

The second harvest, in mid-January, included 22kg of mooli radishes, all of which has gone to three elderly care centres in Fortune City One. Vegetables unsuitable for consumption are turned into compost. That makes sense given that food accounts for 30% of landfill waste in Hong Kong, according to the Hong Kong government’s Environmental Protection Department.

Admittedly, both the farm and its harvest are a tiny drop in the ocean when it comes to feeding Hong Kong’s citizens and reducing the need to import goods.

But Chiu has the reit’s other buildings in her sights. “We hope to be able to roll out more projects,” she says.

The urban farm on top of Fortune City One mall is just 538ft², but it is a statement of intent. Were Fortune Reit to put similarly sized farms on all of its malls, it could have 8,600ft² of agricultural land delivering more than 500kg of produce around six times a year.

Urban farming on the rise in Hong Kong

Urban farming has been around for 40 years and began to emerge in Hong Kong almost two decades ago, says Andrew Tsui, co-founder of Rooftop Republic. He began working in urban farming in 2012 and founded Rooftop Republic in 2015 effectively as a facility manager.

The first real estate management company to involve its buildings in rooftop farming in Hong Kong was Chicago-based JLL. In 2014, it began to operate an urban farm on Bank of America Tower in the Central district, donating the harvest to Feeding Hong Kong, the territory’s first food bank. In March 2019, it launched its second farm on the YKK Building II in Tuen Mun, producing 400kg of vegetables from its first harvest. Half the harvest is sold and half donated to local food recycling centre Food Grace. 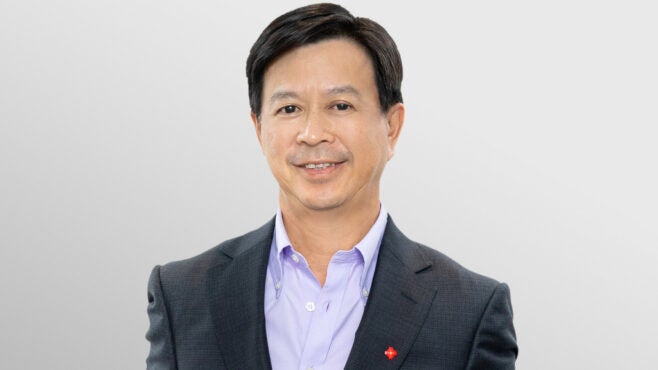 Alex Cheung of DBS says the bank will be monitoring progress on community engagement via regular conversations with Fortune Reit and Rooftop Republic. (Photo courtesy of DBS)

One of Rooftop Republic’s first projects in 2015 was to help consultancy PwC set up a farm on the top of its Manulife Financial Centre, its headquarters in Hong Kong. Since then, it has also worked with Hong Kong airline Cathay Pacific, property company Sino Group, luxury hotel chain Swire Hotels and the Hong Kong Housing Authority.

Fortune Reit and Rooftop Republic were brought together by DBS. The bank has worked with the former for over a decade, while its relationship with Rooftop Republic goes back to 2018, when it won an award from the DBS Foundation.

Last year, DBS partnered with Rooftop Republic and property developer Swire to build the highest urban farm in Hong Kong – some 300m above ground – at Taikoo Place in Quarry Bay, where it has an office. The first harvest, in September, saw 24kg of fruit and vegetables donated to Feeding Hong Kong, while all food waste is turned into compost.

It is the city’s only reit with a five-star rating from the Amsterdam-based Global Real Estate Sustainability Benchmark (GRESB) and has been on the Hang Seng Corporate Sustainability Benchmark Index since 2017. Since last year all of its buildings have achieved either a good or excellent BEAM (Building Environmental Assessment Method) Plus New Building (Version 2.0) certification. In place since 2011, BEAM Plus is one of the city’s most widely used voluntary green building labelling schemes.

It’s probably fair to say some [sustainability-linked bonds in Hong Kong] are close to greenwashing because the targets set are simple. They are not ambitious, not fully transparent and sometimes not even measurable. Albert Lai, Carbon Care Asia

The first, in October 2020, was a HK$1bn five-year deal signed with DBS. It followed up in July last year with another five-year SLL, a HK$1.5bn facility via Singaporean bank OCBC to refinance an existing club loan. The KPIs of both transactions were linked to reducing greenhouse gas emissions, energy consumption and waste management.

Fortune Reit is starting to show progress on these targets. Last year, it said it had had cut energy consumption year-on-year by 10%, greenhouse gas (GHG) emissions by 13.5% and water consumption by 7.3%. The reit included figures for Scope 3 emissions – those generated by its customers and supply chain – within its GHG emissions data for the first time. Last year, Scope 3 carbon dioxide emissions stood at 490.2t, mostly generated by electricity consumption for common areas in indirectly managed malls.

Such activity and certification will help dispel investor concerns over potential greenwashing, which always loom large over Hong Kong’s property market and developers.

Albert Lai, chief executive of Carbon Care Asia, a Hong Kong-based consultancy focused on carbon management and sustainable finance, speaks highly of real estate companies such as Fortune Reit that have set emission reduction goals for 2030 and adopted science-based targets. The reit has committed to zero net carbon by then, says Chiu.

But Lai has his doubts about many other companies in the sector, though he declines to name names. There has been a flurry of green, social and sustainability (GSS) debt issuance over the past couple of years (see table below), and he is very sceptical of sustainability-linked bonds in particular.

“It’s probably fair to say some of them are close to greenwashing because the targets set are simple,” Lai says. “They are not ambitious, not fully transparent and sometimes not even measurable.”

The problem is likely to get worse before it gets better, he adds.

“If investors are focusing on impact more and more, they will realise that these [GSS] products are not necessarily worth the name,” Lai says. He urges the standard-setting bodies to keep revising the standards upwards to meet investor expectations.

Chiu disagrees. She admits potential greenwashing is an issue in the sector but says it is becoming less of one as “green awareness is getting a lot of attention in Hong Kong”. The way to stay above suspicion, she adds, is to keep everything out in the open and to “get people to actually certify what we’re doing”.

Being certified is one thing; the real test is making, measuring and reporting progress against stated goals and standards. Fortune Reit seems – so far – to be doing a decent job, while also setting a positive example.