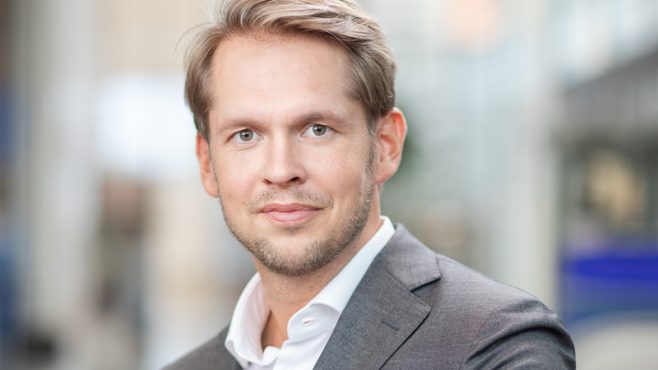 Nordea’s Anders Langworth: the bank plans to release proposals for how it will address “climate-vulnerable sectors”. (Photo courtesy of Nordea)

Finland’s Nordea, one of the biggest banks in the Nordic region, announced at the start of the year that it planned to integrate sustainability fully into its business strategy. That goal includes achieving net-zero emissions across its loan and investment portfolios and internal operations by 2050.

However, like other big lenders and investors with similar ambitions, it faces a tricky balancing act: how to achieve these goals while continuing to finance less climate-friendly sectors. The issue has been underscored in the past week by both a new court order requiring oil major Shell to slash its emissions by 45% by 2030 and a stark warning to energy industry financiers from the International Energy Agency.

We very much have exposure to our operations in terms of reputational risk. Jacob Michaelsen, Nordea

In Nordea’s case, shipping and fossil fuels – both major contributors to the Nordic economy – are the key areas of concern. The bank had loans outstanding to the maritime sector of €6.19bn ($7.54bn), roughly 2% of its total lending portfolio, according to its first-quarter interim report (see graph below). And as of March, Nordea had €1.1bn in exposure to the oil, gas and offshore industry. It has come in for criticism for its activities in relation to both sectors.

That said, Nordea’s shipping, offshore and oil services loan portfolio has steadily fallen to €6.6bn as of 31 March from €11.6bn four years earlier. But it feels that ditching that exposure altogether is not feasible.

Rather, it has set itself emission-reduction targets, handed more influence to its sustainability and ethics committee, and taken more account of its clients’ concerns about its environmental commitments and policy.

“You’re not going to solve the problem of greenhouse gas [GHG] emissions by only lending to customers already aligned to the Paris Agreement and by stopping access to finance for those in need of transition [to cleaner fuels or output],” Jacob Michaelsen, head of sustainable finance advisory, tells Capital Monitor. “It is just not responsible to push the problem onto someone else.

“A key focus for us is to help transition customers towards the net-zero agenda,” he adds. “As long as they are committed to the underlying principles of the relevant association, be that the Green Bond Principles or the Green Loan Principles [set by the International Capital Markets Association and the Loan Market Association, respectively], then the responsible thing to do is to help them reach their targets.

“In fact, the discussion among the more responsible investors is all about transition and less and less about divesting,” says Michaelsen.

Be that as it may, Nordea's new targets will necessitate substantial changes to its business.

They include reducing carbon emissions from its internal operations by at least 30% by 2023 from 2019 levels and by 50% by 2030, by which point it plans to achieve a net-positive carbon contribution. The bank also aims to cut emissions across its investment and lending portfolios by 40% to 50% by 2030. And it is targeting a 25% reduction in emissions from its shipping portfolio relative to the global shipping industry by 2030.

Alongside its climate action goals, Nordea has made new commitments on social and governance issues, including screening new suppliers for sustainability issues. It already has in place a human rights impact assessment of its supply chain and later this year is set to implement a new diversity and inclusion strategy. Moreover, the bank will integrate sustainability targets into remuneration programmes from next year.

Resolving its approach to maritime finance is a particularly thorny sustainability challenge for Nordea, just as it is for other lenders.

Shipping is a major polluter, representing 2.2% of global anthropogenic emissions, according to the third International Maritime Organisation (IMO) 'Green House Gas Study', published in 2014, the latest figures the IMO has released. And yet the sector accounts for 80% of world trade volumes, so is of vital importance to the global economy.

Shipping is a highly leveraged, low-margin business, so it has viewed “decarbonisation” as “a secondary priority”, according to a May report called ‘Shipping Emission Rules to Tighten, Weakening Profits’ from rating agency Fitch. But the sector faces increasingly tough regulation, says the report.

One approach adopted by Nordea is to finance cleaner vessels. In 2019 it was a lead arranger on what was reportedly the first green bond issued to support the Nordic maritime industry.

Bermuda-based Teekay Shuttle Tankers, which owns one of the world’s largest fleets of ships transporting oil from offshore drilling sites, raised the funding for the purchase of 'E-shuttle' vessels. These have substantially lower emissions than older ships on the fleet.

Teekay (renamed Altera Shuttle last year) thereby reduced its annual emissions of CO2 by 47%, nitrogen oxide (NOx) by 88%, sulphur oxides (SOx) by 99%, and volatile organic compounds (VOC) by 95% compared to 'business as usual' in the North Sea context, according to Cicero, the second-party opinion provider on the deal.

Accordingly, the Teekay issue was 100% aligned with the Green Bond Principles, adds Michaelsen.

And yet the deal further underscored the problematic nature of this type of financing. Some investors questioned whether such a bond was truly green, given the proceeds would be used to fund oil industry services. Ultimately, Teekay raised only $125m of the $150m to $200m it had targeted.

Some investors will be put off by banks helping to finance energy-intensive industries, Michaelsen concedes. Arguably the most obvious example of this is the oil and gas sector, which presents another dilemma for Nordea and other lenders.

“It’s the question I’m asked most: why not stop financing fossil fuels today?” says Anders Langworth, head of group sustainability at Nordea. “It’s not the easiest question to answer. What happens if we stop now? Society would risk grinding to a halt.

“We’d rather take responsibility for driving the transition to a sustainable economy. We align ourselves to the Paris Agreement and the [United Nations’] Sustainable Development Goals and expect our customers to do the same. If they don’t, then we need to make a decision.”

Nordea is not alone in continued financing of fossil fuels. Since the signing of the Paris climate agreement at the end of 2015, ten Scandinavian banks (including Nordea) have provided $67.3bn in financing to the coal, oil and gas sector, according to a February report by BankTrack, a campaigning organisation that monitors the financing activities of private sector banks.

Nordea is, however, willing to divest where it feels insufficient progress is being made. It sold a position in Malaysia’s Tenaga Nasional as it felt the power company’s transition strategy would not phase out the use of coal quickly enough.

Ultimately, doing business in or with energy-intensive industries has implications beyond the purely financial. The optics of such activity are increasingly important as the topic of sustainability rises up the public’s list of priorities.

“Nordea assesses its clients and deals on a case-by-case basis, but it’s important to remember that we very much have exposure to our operations in terms of reputational risk,” Michaelsen says.

Another result of the new sustainability strategy is that decisions on client relationships, taken at the board level, have been more heavily influenced by the bank’s sustainability and ethics committee.

Nordea has this year issued guideline policies and principles outlining the commitment to the Paris Agreement that its clients want to see, says Langworth.

The bank has also adjusted its governance structure to incorporate the sustainability and ethics committee, whose main mandate is to track overall progress and performance on sustainability goals, he adds. This will help ensure that Nordea stays on track towards its long-term objectives and follows up on its 2023 targets and any new plans it puts in place, Langworth says.

One new initiative should be realised soon: the bank intends to release proposals for how it will address its business in “climate-vulnerable sectors”.

By the third quarter of 2022, Nordea will publish at least three sector-specific “long-term pathways”, says Langworth. These will initially focus on the most climate-vulnerable sectors, such as fossil fuels. In the longer term, it will publicly disclose sector-level data.

Rising regulatory certainty and more widespread adoption of agreed standards for emissions measurement and reporting will no doubt help the bank implement its carbon-reduction plans. In the meantime, Nordea will try to balance its client needs against its climate goals using transition financing and other sustainable funding techniques.