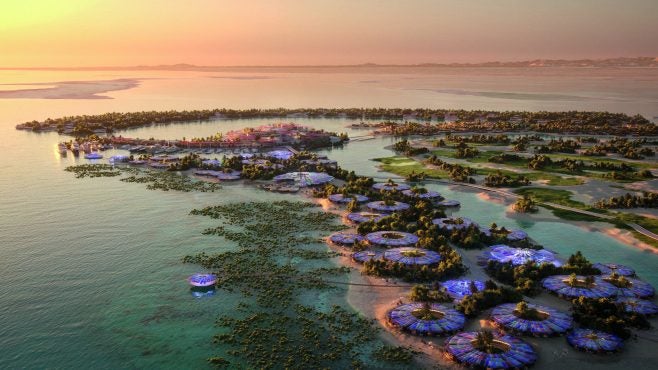 An artist’s impression of the planned development. (Photo courtesy of The Red Sea Development Company)

Saudi Arabia’s The Red Sea Development Company (TRSDC) secured a huge green financing deal in late April, the first of its type to be executed in riyals. Owned by the country’s Public Investment Fund, the regenerative upmarket tourism project has bold ambitions. Yet there are glaring questions over its claims to sustainability.

“The scale of this project is unmatched anywhere in the world, and we are setting new standards in regenerative tourism at every turn,” said TRSDC chief executive John Pagano as he announced the plan.

Due for completion in 2030, the so-called ‘giga-project’ will spread across 22 of the 90 islands that form an archipelago off Saudi Arabia’s west coast, as well as inland, and offer 50 hotels with 8,000 hotel rooms (see map below). The islands without hotels will remain untouched, with nine designated as special conservation zones.

The SR14.1bn ($3.8bn) term loan and revolving credit facility was TRSDC’s first capital markets transaction, with Banque Saudi Fransi, Riyad Bank, Saudi British Bank, and Saudi National Bank. HSBC – criticised by some for its seemingly less sustainable financing activities in the Middle East – acted as a green loan coordinator on the transaction. Figures were not provided for how much the whole project will cost, but when complete it is expected to add SR22bn to the country’s GDP.

TRSDC’s website bursts with enticing shots of the archipelago and sand dunes, replete with pastel greens and blues. But it is hard to square this idyllic image with the development spanning five islands – and featuring 16 hotels, 3,000 rooms and its own airport – slated to open by the end of next year.

“Pre-Covid, when the project was conceived [in 2019] it was always seen to be a sustainable, responsible and regenerative project,” says Jay Rosen, the Saudi-based chief financial officer at TRSDC.

A move to green financing was natural, he says: “We were already doing the requirements that were needed [for the deal] to be accredited and qualified as a green loan.”

The financial terms of the financing have not been disclosed, though the 15-year term green loan with a revolving credit facility is understood to have an interest rate of around 1.8% (around 100 basis points over the Saudi Arabian interbank offered rate).

The first green loan in Saudi Arabia was a $258m export credit agency (ECA) loan in June last year that German credit insurer Euler Hermes structured alongside Crédit Agricole CIB and HSBC. The proceeds were for the Ministry of Finance to acquire 842 buses for the new Riyadh public transport network from Daimler’s bus subsidiary in Germany. 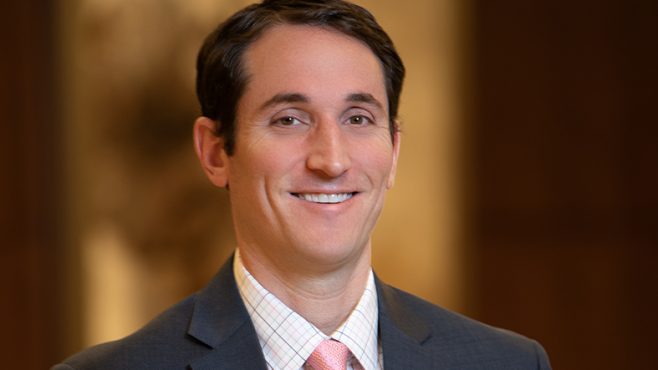 While green debt and loan issues generally cost the borrower less than conventional financing instruments, Rosen denies that this was a motivation for the issue.

“There isn’t much of a difference in terms of pricing per se,” he argues, but didn’t provide numbers to support this point. Rather, the deal was a way to raise awareness of the project, Rosen says, and “it positions us more in the midterm and long term to a broader pool of capital”.

When it opens, the resort will run entirely on renewable energy, with 100% carbon neutrality, TRSDC says. The aim is “to get to the point where there is zero discharge into the sea”, says Rosen.

He also points to a partnership signed with King Abdullah University of Science and Technology to assess the environmental impact of the development. Moreover, he adds, TRSDC has been “able to touch all 17 of the UN’s sustainable development goals [SDGs]” as part of the project’s development.

Yet building an airport for a green project does not seem to fit with the overall theme. Rosen acknowledges the apparent contradiction, but says that while other airports aim to be carbon-neutral in respect of their operations, TRSDC wants to go further: “We are looking to be pioneers. We want to be carbon-neutral when you take into account transportation, and we are looking at a number of initiatives.”

Building an airport for a green project does not seem to fit with the overall theme.

He cites, for example, sustainable fuels and algae sequestration, arguing that 50ha of algae could sequester all of the carbon emissions from the resort. (Algae can be up to 400 times more efficient than trees at removing carbon dioxide from the atmosphere.)

Be that as it may, the genuine greenness of the project is ultimately hard to assess, leaving the project and its facilitators open to charges of greenwashing.

None of the banks involved in the deal would respond to questions from Capital Monitor concerning its specific structure. TRSDC was similarly elusive when pressed for more details on aspects of the transaction.

Green financing accreditation for the loan is governed by a framework from the International Capital Markets Association and the Loan Market Association, says TRSDC. Moreover, second-party opinion on the financing comes from Norway’s DNV. But independent details are missing.

Companies are generally quick to publish the second-party opinions for their green financing, usually on their websites. But TRSDC has not done so.

“It is something we’ll probably look to do in the future,” says Rosen, without saying why it has not yet made such a move.

Moreover, the company’s first annual sustainability report is expected to be released soon, though it had not appeared as this article went to press.

Certainly, some investors are sceptical about the country’s green credentials.

“Our sovereign sustainability model puts the environment at the core of our investment strategy, and Saudi Arabia scores poorly on environmental issues, making it not eligible for investment by our sustainable vehicles,” says a spokeswoman for Candriam, a Luxembourg-based asset manager owned by New York Life.

The country also scores two out of 100 in the human rights and civil liberties component of the company’s social capital measure, she adds. Candriam’s framework also excludes investments in countries such as Saudi Arabia that are defined as “not free” by the US government-funded Freedom House.

It assigns the country a ‘freedom’ score of seven out of 100, a ‘political rights’ score of one and a ‘civil liberties’ score of six. That puts it above North Korea, but below China and Belarus.

Saudi Arabia scores poorly on environmental issues, making it not eligible for investment by our sustainable vehicles. A spokeswoman for Candriam

The new tourism development is part of Saudi Arabia’s 2030 plan, a grand economic vision to move its economy away from the oil on which it has relied for decades. Rosen calls such projects “a barometer of where the kingdom is headed”.

The government has made various public statements about its environmental push. For instance, the Saudi Green Initiative – announced by Crown Prince Mohammed bin Salman last month – aims to generate half the country’s energy from renewable sources by 2030, compared to 0.3% today. But specifics on how this will be achieved are thin on the ground.

It is a similar story in other areas. The country has laid claim to progressive developments, such as in June 2018 lifting its ban on women driving while continuing its repression of their rights in many other areas.

The financial sector also appears to hide behind headline-grabbing memoranda of understanding (MoU) rather than action.

In mid-August last year, for example, the Tadawul stock exchange trumpeted plans to launch an ESG index in cooperation with index provider MSCI either by the end of 2020 or by 31 March this year. It is yet to materialise.

At the end of January, the bourse also signed an MoU with the Riyadh-based non-profit Future Investment Initiative Institute to boost ESG awareness in Saudi Arabia. Again, it is hard to see any concrete progress, and comment from independent bodies was difficult to obtain.

Environmentally, the kingdom suffers from a number of climate threats. Four Twenty Seven, a California-based climate risk data firm, estimates that by 2040 it will be the country most exposed to heat stress and the fourth most exposed to water stress (behind the UAE, Iran and Singapore).

As for governance, the Democracy Index 2020 from publisher The Economist gives the country a score of 2.08, below that of Eritrea and Uzbekistan. “The kingdom remains a deeply repressive authoritarian state that denies almost all civil liberties and political rights and discriminates systematically against women and religious minorities,” it concludes.

Such low rankings have historically limited the kingdom’s access to international capital – and that is not likely to improve given heightened investor scrutiny of ESG issues these days.

TRSDC’s new resort may well be a roaring success and an international wonder. But without greater transparency it will be hard to call it green or sustainable with any credibility.