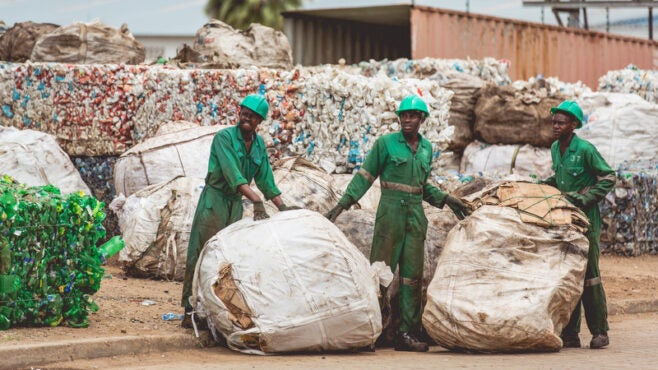 Plastic being sorted for recycling in Kenya. (Photo courtesy of Mr Green Africa)

Plastic waste is a huge global issue; a non-biodegradable menace for land and sea alike, for which recycling is not a long-term solution. On the present trajectory, the oceans alone will contain an estimated 250 million tonnes of plastic by 2025 and 700 million tonnes by 2040, according to a report published last month by the Environmental Investigation Agency (EIA), a London-based non-governmental organisation.

Wealthy countries export plastic waste as they lack the capacity to deal with it, says Christina Dixon, deputy campaign lead for oceans at the EIA. Until it banned the practice in 2017, China used to receive the bulk of the world’s used plastic detritus – around 8.9 million tonnes a year, some of which was recycled, but most of which was destined for landfill. Now the bulk goes to Indonesia, Malaysia, Turkey and, increasingly, Africa. That’s on top of the plastic these countries make and use domestically.

In Kenya, for instance, half of the 4,000t of waste produced daily in the metropolitan area of capital city Nairobi is not collected. The rest is dumped, and less than 10% of the total gets recycled, according to Nairobi-based waste management social enterprise TakaTaka Solutions. Coca-Cola is arguably the biggest culprit when it comes to plastic waste in Kenya and indeed globally (see charts below), though bottle buyers themselves must shoulder some of the blame.

A key issue is that there are not yet any dedicated multilateral environmental agreements (MEAs) for dealing with plastic. “We need a legal instrument on plastics that covers the life cycle,” says Dixon.

Some guidelines and rules contain provisions on plastic, but they are very fragmented. They include the Basel Convention, which covers the trans-boundary movement of hazardous wastes; the International Maritime Organization’s Marpol convention around dumping waste at sea; and the Stockholm Convention MEA.

That said, negotiations on a plastics treaty are due to start at the end of February at the next UN Environment Assembly in Nairobi and are expected to conclude within the next two to three years.

Arguably, of course, the simplest solution is to use less plastic, but that will take time and a huge change in habits. Recycling more plastic is a more realistic remedy – though only in the short term, since plastic degrades every time it is recycled. The same piece of plastic can only be recycled about two to three times before it can no longer be used.

A substitute for virgin plastics

In the meantime, the likes of Nairobi-based Mr Green Africa are helping to make a positive impact. The Kenyan company is not only working to recycle plastic, but also trying to stop the import of virgin plastics in the first place. And it is doing so with a seemingly unlikely partner: US chemicals group Dow, one of the world’s biggest producers of plastic.

Founded in 2014 by Keiran Smith and chief information officer Karim Debabe, Mr Green Africa collects and converts locally collected plastic waste into high-quality recyclates and sells them on as a substitute for imported virgin plastics. It launched recyclable plastic packaging for Unilever’s Sunlight scouring powder in January 2020, for example. 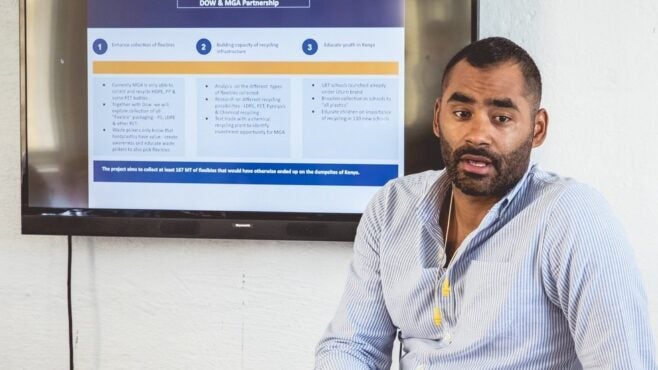 The idea of reusing plastics is not new. In 2018, Germany’s Adidas started to manufacture shoes from recycled ocean waste, and since 2015 it has been mandatory in India for plastic waste to be used in road construction. Even in Kenya, Gjenge Makers turns plastic waste into building material.

But recycling is a growing trend, particularly among international brand owners. Companies like Coca-Cola, Nivea, PepsiCo and Procter & Gamble “all have targets [for] using recycled materials in their packaging”, Smith says. He declined to say whether those companies were clients of Mr Green Africa.

The company raised $2m in Series A funding, its first significant round of venture capital financing, in August 2019. The investors were Global Innovation Fund, a London-based impact investment fund, and Dutch family office DOB Equity, an impact investor focused on East Africa.

Mr Green Africa’s aim was to create a product that was viable for the industrial sector, Smith tells Capital Monitor. Hence it has spent the past three years proving the supply chain: how to source and sell the plastic.

On 11 January the company completed its Series B round of funding led by Dow and accompanied by Australian philanthropic organisation Minderoo, US impact investor AlphaMundi, Danish philanthropic foundation the Bestseller Foundation, and DOB Equity. Smith declined to discuss how much was raised.

This investment, he says, was “about scaling and replicating” and it will create some 200 more jobs, impact the lives of 5,000 waste pickers and engage at least 250,000 consumers in separation-at-source programmes.

In June last year, Mr Green Africa became the first waste management and recycling company in Africa to achieve B Corporation status – making it legally required to consider the impact of its decisions on its workers, customers, suppliers, community and the environment.

Dow’s involvement as the lead Series B investor is harder to square in this equation. But Smith says the chemicals company “having skin in the game” underscores how serious it is about plastic recycling.

Others, though, would argue that Dow is making more money off a problem it has helped to create. 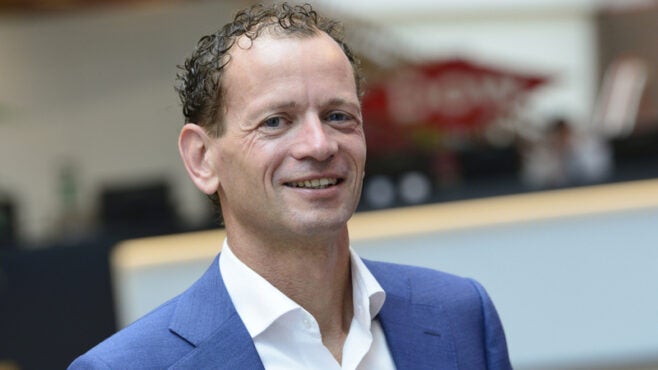 Marco ten Bruggencate, commercial vice president for packaging and speciality plastics for Europe, Middle East and Africa at Dow, concedes that there is a commercial motive, but also points to a social one. Mr Green Africa has a scalable business model that will ultimately be profitable, while also creating jobs, he says.

The investment also ties in with Dow’s sustainability aims, one of which is to enable one million metric tonnes of plastic to be collected, reused or recycled through its direct actions and partnerships by 2030. Dow has also helped Mr Green Africa develop a residential plastic waste collection app called Plasticoin, which was piloted in 2020 and is now being scaled up.

Mr Green Africa is not yet profitable but is “about to grow” into a business with annual revenue of $7m to $10m, says Smith, declining to disclose the current figures.

The company plans to enter neighbouring markets, where Dow – which works with a huge number of fast-moving consumer goods companies globally – will be able to help with contacts. Smith also intends to expand by working with contract processing recyclers that have the assets to create the high-quality material required or by setting up joint ventures.

While Mr Green Africa has been applauded for addressing Kenya’s plastic waste problem, there is a broader debate about the use of the term “circular economy” in relation to plastics.

The EIA’s Dixon outlines the issue. Some do not believe that a circular economy is ultimately possible for plastics because they are inherently full of toxic additives. The use of the phrase “circular economy”, they argue, diverts attention away from the real challenge: the need to produce less plastic.

However, Dixon adds, given that there is a huge amount of plastic in the system, repurposing or recycling it makes sense, especially if people can get an economic return, particularly in affected communities.

As Flavia Howard, climate and environment practice manager at impact advisory firm Dalberg in Nairobi, says: “To exist sustainably we do need to go beyond circular models, [but] to be able to recycle once is better than not at all.”