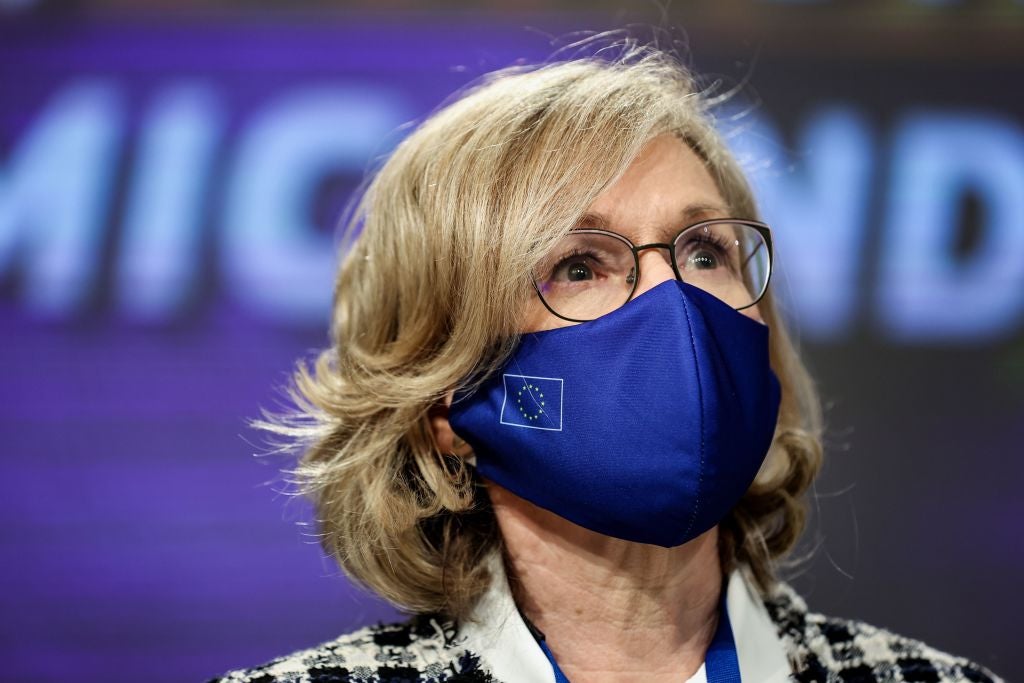 EU commissioner in charge of financial services, financial stability and the Capital Markets Union, Mairead McGuinness, has been engaging with climate NGOs. (Photo by Kenzo Tribouillard/Pool/AFP via Getty Images)

The European Commission’s (EC) upcoming review of the Non-financial Reporting Directive (NFRD) will introduce mandatory reporting requirements across a range of environmental, social and governance (ESG) factors for a much wider range of companies than ever before.

A leaked draft proposal, penned by the EC and seen by Capital Monitor, outlines intentions to replace the NFRD with what is called the Sustainability Reporting Directive (SRD). The official version of the proposal is due to be published on 21 April.

The NFRD review is a key missing piece of the EU’s overall sustainable finance framework. The information companies are expected to disclose is already required from asset managers under the recently implemented Sustainable Finance Disclosure Regulation.

“We’ve known for a long time that a major hurdle to sustainable finance is access to data and making sure it’s high quality and easy for investors to compare,” says Victor Van Hoorn, executive director at the European Sustainable Investment Forum, who welcomed the report.

While much of the detail will be clarified later, the EC proposes a number of high-level changes for companies operating in the EU, which would be introduced in phases over the next three years.

The proposed SRD will apply to many more companies than the NFRD does right now. The draft notes that around 11,600 companies (representing 47% of all EU limited liability undertakings’ turnover) report in line with the NFRD, which could grow to 49,000, or 75% of all turnover.

However, it suggests exempting unlisted companies with fewer than 500 employees. Some smaller listed companies may also escape its net. While unsurprising, considering the limited scope of the current NFRD, NGOs and environmental groups have expressed concerns.

“It’s an issue because the risk a company poses to people and planet do not necessarily depend on the size of your company and whether you’re listed,” said Maria Van Der Heide, head of EU policy at NGO ShareAction. “Many mining companies are unlisted, for instance, and we already know about their impact on the environment and society – so we hope this will be amended.”

The draft proposal notes that “most civil society organisations and trade unions” and “many financial institutions and asset managers” supported extending reporting requirements to unlisted SMEs, but that business groups mostly argued against it.

EuropeanIssuers, a trade association representing SMEs, hopes for “a very cautious approach based on proportionality… as requirements on SMEs are already high”.

I can confidently say that the SME proportionality point is going to be the political hot potato. Victor Van Hoorn, European Sustainable Investment Forum

“I’ve been lobbying on EU regulation for eight years now, and I can confidently say that the SME proportionality point is going to be the political hot potato,” says Van Hoorn. “Especially because the scope is already an improvement, some member states will be lobbying against that – so one of our objectives will be safeguarding the existing proposal rather than lobbying for a further extension.”

This does not mean the issue is settled though. The proposed SRD will now work its way through the European Parliament and Council, then through trilogues. Negotiations could easily take 18 months, experts predict.

The existing NFRD requires companies to publish a report on non-financial matters affecting their business, but its guidelines are non-binding. This means the way in which companies report – and the things they report on – vary significantly, limiting the usefulness of the data for investors.

The details on these requirements are not yet known and won’t be until the level two directive is published, though the document mentions:

The proposal adds it will be taxonomy-aligned and both forward-looking and retrospective, which is already significantly more detailed – and meaningful – than the NFRD’s existing approach.

This is also significant considering a separate piece of work by accounting standard-setter the IFRS Foundation, which is in the process of establishing a Sustainability Standards Board to work at a global level.

Van Der Heide hopes that the IFRS Foundation will build on the EC’s proposal; notably, that it will consider social and governance factors as well as environmental – though its scope is likely to be significantly more limited.

The double materiality consideration sets the EC’s plans apart from – and goes much further than – other sustainability reporting frameworks, including the TCFD (Taskforce on Climate-related Financial Disclosures) recommendations that the UK is planning to introduce.

If both the UK and EU proceed with their existing plans, comparison will become practically impossible.

This is important because the whole point of improved sustainability reporting is to standardise non-financial information to help investors make more informed decisions. Yet if both the UK and EU proceed with their existing plans, companies will be working to two different regulatory frameworks, making comparison practically impossible.

The proposal builds on comments made by various EU officials at industry events in recent months, as well as a report by the European Financial Reporting Advisory Group, or EFRAG.

The EFRAG also gets a promotion: the draft proposes a formal role for the group in ongoing reporting standards. “We’re very happy with that,” said Van Hoorn. “The private sector has done a great job in this space, but we know it’s not enough any more – it’s time to make these requirements mandatory, which just can’t be done at private-sector level.”