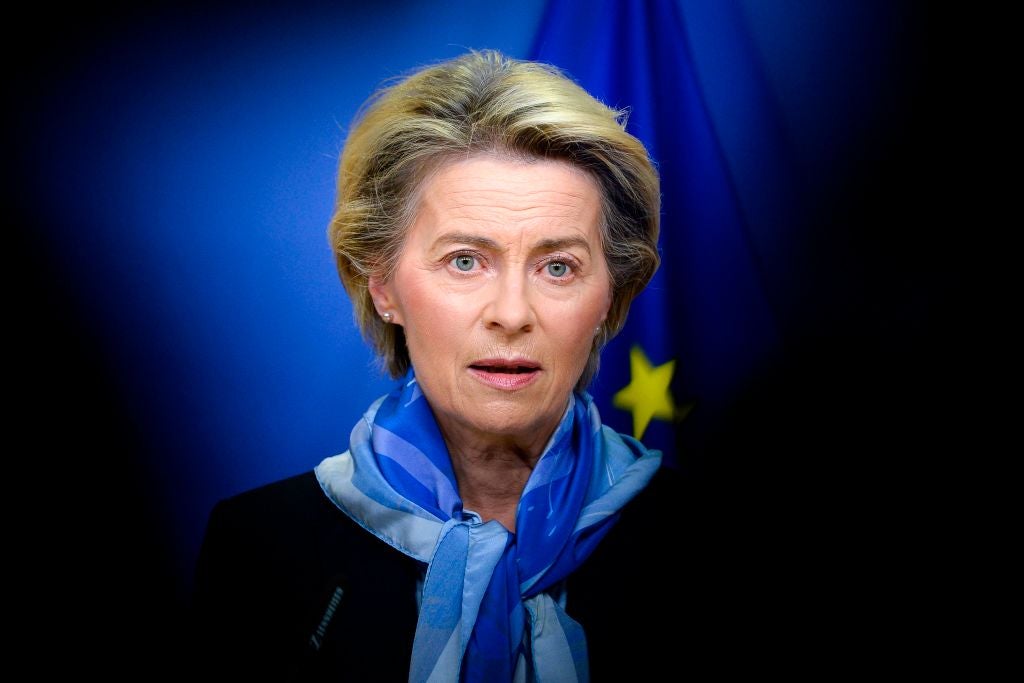 European Commission president Ursula von der Leyen. The potential capital impact of any new initiative is said to be a key consideration for EU policymakers. (Photo by Johanna Geron/Pool/AFP via Getty Images)

Encouraging green investment, data availability, and sustainable corporate governance are likely to be at the heart of the European Commission’s (EC) renewed sustainable finance action plan.

The EC said its renewed strategy will provide a roadmap with new actions “to increase private investment in sustainable projects and activities… and to manage climate and environmental risks in the financial system”. Publication of the plan was initially set for early 2021, but was delayed due to political differences over the taxonomy.

The renewed strategy consultation received nearly 650 responses. Financial institutions, which were a target of the first action plan in late 2019, hope that the renewed strategy will go lighter on them this time around. And they are likely to get what they want: most expect the core initiatives to focus on the real economy.

“It’s clear that the financial side alone cannot drive this process, and price incentives for low-carbon projects aren’t enough either. I think we will see the EC taking a more active approach to encourage finance in certain areas,” says Alexander Lehmann, non-resident fellow at Brussels think tank Bruegel. That could be new labels for green financial instruments, or amendments to bank capital requirements for green investments – or something else altogether.

Lehmann says the potential capital impact of any new initiative is always a key consideration for EU policymakers: “Only when you have transparent metrics can you set targets and commit yourself to them, so the impact on capital flows is very tangible.” In this way, better disclosure is the first step towards more sustainable investment decisions. It will be down to investors to hold companies to account on the commitments they make as a result of these improved disclosures.

It’s hard to know exactly what the EC will publish, but it’s clear there are key policy pillars aimed at diverting capital towards sustainability. Capital Monitor provides a breakdown of what those pillars are and who will be affected.

The concept of a green supporting factor – which would reduce the capital charges for lending to green projects – has been discussed at EU level for some years, but it has its critics. The European Central Bank, concerned about re-introducing risk to the banking sector, has long been one of them. It’s also seen by some as excessively interventionalist by prescribing what is a “good” or “bad” investment rather than letting investors decide for themselves.

Regardless of whether these plans materialise or not at the EC level, many bank supervisors are already looking at how to integrate climate risks into banks’ existing risk management practices via other routes, such as climate-specific stress tests.

Labels for sustainable investment products may also be expanded. The Green Bond Standard was a key component of the 2019 action plan and still needs to be properly defined and enshrined in law, so the renewed strategy is likely to continue with this work. It’s also possible that this template could be extended to other investment products, such as loans or securitisation.

The taxonomy and Sustainable Finance Disclosure Regulation, key features of the initial 2019 action plan, can be viewed under the same umbrella.

At present, aggregated environmental data on companies is sitting behind the paywall of data providers and is only accessible to subscribers. Because each of these providers has its own way of analysing and presenting the data, asymmetry is common, making it difficult for investors to compare different companies.

Any open source for corporate data is likely to take the form of an online platform presently referred to as a European single access point (ESAP). ESAP has also been discussed in the context of the EC’s Capital Markets Union initiative, on which a consultation on its creation closed recently. The main users of an ESAP would be investors. As data availability improves, so will transparency, then risk assessment and, ultimately, investment decisions.

Availability issues are not unique to sustainability information. Trading firms have long complained about the high costs involved in accessing real-time markets data and requested a centralised platform – known as consolidated tape – at an EU level, but progress has been slow. It’s likely that an ESAP for corporate disclosure and a consolidated tape for market data would sit alongside each other, but this is not set in stone. It’s possible that the two end up more closely connected.

The EC has been discussing the concept of a sustainable corporate governance framework for some time. Its consultation, which closed in February, focused on four key themes: director remuneration, duties of care, due diligence, and board expertise.

Like all elements of the renewed strategy, it cannot be viewed in isolation, and is closely linked to the upcoming review of the Non-financial Reporting Directive (NFRD), “because if you have good standards of reporting, that is typically linked to good governance”, says Axelle Blanchard, policy manager at the Climate Disclosure Standards Board.

A key feature of the transparency goal will be the NFRD, which was initially planned for 2020 but delayed due to the pandemic. The NFRD has been in place since 2017 but is no longer seen as fit for the purpose of providing the data needed to achieve the goals of the European Green Deal.

According to the consultation, better oversight of ESG research, rankings and ratings providers is a major priority for financial market participants. Conflict of interest concerns are often raised as many of these companies offer both scoring and advisory services. Another common criticism is that high market concentration gives companies the freedom to choose a preferential framework.

In January, the European securities regulator Esma called for a common definition of ESG ratings, citing risks of greenwashing, capital misallocation and product mis-selling, so this is a possibility.

There was initially speculation the EU was working on its own set of accounting standards. This is highly unlikely considering the level of support for a proposal from the IFRS Foundation, which develops accounting standards in 140 countries, to expand into sustainability reporting.

Various EU institutions, including the securities, banking and insurance regulators, have voiced their support, so it’s likely that the EC will seek to provide support and guidance to the existing work.

The IFRS Foundation is tipped to announce the creation if its Sustainability Standards Board at Cop26 in November.