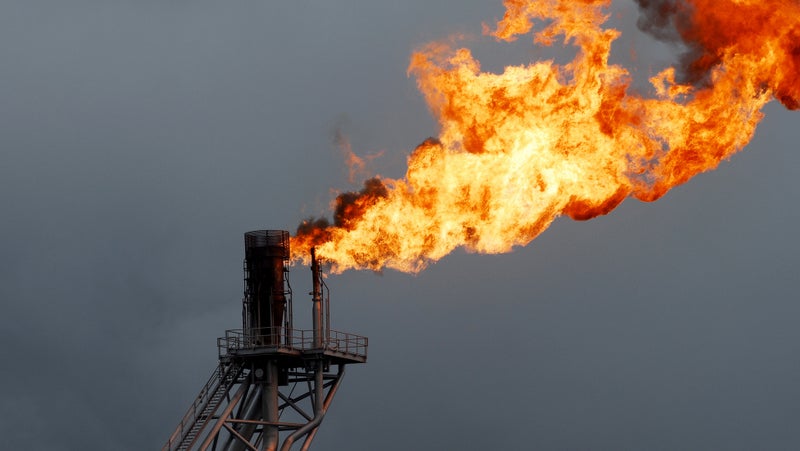 Still firing: Banks are not making cuts to fossil fuel funding necessary to keep emissions aligned with the Paris Agreement. (Photo by think4photop from iStock / Getty Images Plus)

Mark Carney’s announcement last week at the Cop26 climate summit that $130trn of private capital is aligned with net zero has received a mixed response. While many praised the sizeable commitment to fighting climate change, concerns over greenwashing within the banking sector, in particular, are apparent.

The Glasgow Financial Alliance for Net Zero (GFanz) is an umbrella group of six financial alliances chaired by Carney and convened by the United Nations, each of which has committed to reaching net-zero emissions by 2050.

In the run-up to Cop26, GFanz and, in particular, its Net-Zero Banking Alliance (NZBA) member – which represents around 40% ($66trn) of banking assets and boasts 92 signatories – came under scrutiny from campaigners, including Stand.earth. They argue that recent commitments made by GFanz members lack credible interim targets, offsetting programmes and fossil fuel policies – in effect, they are PR stunts.

Monday’s revelation that banks – including HSBC – within the NZBA lobbied the group to “water down” its commitment by lengthening its deadline for setting interim targets add fuel to the fire.

The main worry is that despite a recent surge of signatories to the NZBA, financing of fossil fuel companies continues. According to the environmental non-profit organisation Rainforest Action Network (RAN), banks provided $3.8trn to the sector through lending and debt underwriting in the five years since the Paris Agreement.

In May this year, the International Energy Agency (IEA) published a landmark report arguing that to keep emissions 1.5°C below pre-industrial levels, there can be no more investments in new oil, gas and coal projects after 2021.

Fossil fuels are not even mentioned in the [GFanz] Race to Zero criteria – rather like a global anti-smoking campaign not mentioning cigarettes. Reclaim Finance’s report: ‘It’s Not What You Say, It’s What You Do’

A key criticism of the GFanz alliances is that, until now, their guidance has included no mention whatsoever of fossil fuels. A report from environmental non-profit organisation Reclaim Finance, released just ahead of Finance Day at Cop26 on 2 November, compared this to a “global anti-smoking campaign not mentioning cigarettes”.

There are, however, signs that Carney is taking steps to remedy at least the principal issue highlighted with the alliance.

The former Bank of England governor’s $130trn announcement was the headline of GFanz’s updated progress report published last Wednesday. In it, for the first time, the alliances said financial institutions must take “meaningful measures” to embed net-zero commitments in business practices, including implementing specific policies on “key topics”, such as fossil fuels and deforestation.

Accompanying the report, Carney presented an updated fact sheet for GFanz. It says that while the Race to Zero, which provides GFanz with criteria it must follow, does not include specific requirements relating to any particular sector, all 1.5°C-aligned scenarios “are clear that accelerating the phase-out of fossil fuels is essential for achieving the goals of the Paris Agreement”.

The fact sheet also suggests that GFanz may remove members that “fail to live up to their published commitments”, and says that partner initiatives have already removed members from the Race to Zero campaign on this basis.

A closer analysis of policies

Whether a threat to be removed as a signatory will be enough to keep banks on their toes is questionable. For now, a closer analysis of the actual fossil fuel policies and net-zero targets of NZBA members illuminates the discrepancies that lie at the heart of the alliance’s commitments.

The timeline below illustrates when the 50 NZBA members with fossil fuel policies either implemented or strengthened their policies. It shows that these banks have had policies in place for a relatively long time – particularly for coal. It is important to note, however, that only half of the NZBA signatories have any policies in place.

But a closer analysis of the NZBA members, using assessments from Reclaim Finance, show that only a handful of its members (18 out of the 98) have policies that restrict financial services to companies planning new coal mines, coal plants or coal infrastructure.

The numbers are even lower for oil and gas, which are not shown on the above chart. Not a single bank policy excludes all companies expanding in the Arctic, according to research published in September by Reclaim Finance.

Banks including NatWest, Danske Bank and Crédit Mutuel have taken some steps in restricting the financing of new oil and gas reserves, although their restrictions relate only to project financing and not to general corporate lending.

The only net-zero bank

Using Reclaim Finance’s coal policy scoring methodology as an indicator of which banks have robust policies, the highest-scoring bank is France’s La Banque Postale, which received full marks. Under the methodology, each lender is given a score out of 50 for five indicators, including coal projects, coals developers, whether the threshold is relative or absolute, and whether it includes a phase-out strategy.

Last month, La Banque Postale became the first and remains the only lender to commit to completely exiting the coal, oil and gas sectors by 2030. That makes it the only bank with a credible net-zero strategy, says Xavier Lerin, senior banking analyst at ShareAction, a charity that promotes responsible investment.

“No bank with exposure to fossil fuels can claim its commitments are aligned with a net zero by 2050 unless they require their corporate clients to stop investing in fossil fuel expansion in line with the IEA net-zero scenario,” he adds. “So far we have not seen any other bank taking this approach.”

That La Banque Postale is uniquely aligned with net zero is a view shared by Alison Kirsch, policy and research manager at RAN. But she is less optimistic when it comes to other banks.

I could count on one hand which financial institutions have actually committed to ending fossil fuel expansion. Whereas the number of institutions that have made these lofty commitments [to net zero] proliferates every day. Alison Kirsch, Rainforest Action Network

“I could count on one hand which financial institutions have actually committed to ending fossil fuel expansion,” Kirsch says. “Whereas the number of institutions that have made these lofty commitments [to net zero] proliferates every day.”

She is part of the Bank on Our Future pressure group and network, which provided Capital Monitor with some guidance on how to spot ‘greenwashing’ in banks’ net-zero policies. Its red flags include: 2050 commitments without short-term targets; a narrow focus on project finance; interim targets based on emissions intensity; and client engagement without clear requirements and consequences.

One example of a bank to have successfully integrated client engagement within its policies is Crédit Agricole, Kirsch says. The French firm has a condition in its policy that by the end of this year clients must have a full coal phase-out strategy by 2030 in the EU and OECD countries, and 2040 in the rest of the world, to avoid being dropped.

In becoming a signatory to the NZBA, banks commit to taking four steps over the next 29 years to ensure they reach net zero by 2050. These include: setting and publicly disclosing long-term and intermediate targets; establishing an emissions baseline and annually measuring and reporting on the emissions profile of their lending portfolios and investment activities; using widely accepted science-based decarbonisation scenarios to set targets; and reviewing those targets regularly as climate science develops.

A lack of consensus

Crucially, there is no industry consensus on whether traditional capital markets services come within the scope of the NBZA. This ambiguity has even led to accusations of greenwashing. A prominent example is that NZBA signatory banks including Citi, Commerzbank and Bank of America have arranged funds for SUEK, a Russian coal major that is expanding its coal mining and power business.

To add to the confusion, separate guidance published in October by the Prince of Wales’s Financial Services Taskforce recommends that "as part of a robust, transparent approach", banks should disclose emissions metrics related to capital markets financing, "where material". The task force is an industry subgroup of the Sustainable Markets Initiative that helps institutions develop actionable plans for a sustainable future.

But according to a report published in September by ShareAction, which analysed the net-zero commitments made by European banks in the run-up to Cop26, just one bank, Barclays, accounted for underwriting in its targets.

This is one of the reasons why Barclays is cited in ShareAction’s report as an example of a bank with better net-zero policies than most.

To mark the middle of a chaotic week for the alliances, however, even Barclays has been found to have breached its own climate policy. An investigation published last week by the Financial Times reveals that the bank appears to have broken its own rules by acting as lead underwriter for a $216m bond deal for US-based utility Monongahela Power.

The utility’s 86% coal-generation fleet means it breaches Barclays’ policy that excludes companies deriving 50% of their revenues from coal, as shown in the above chart. Barclays told the Financial Times the transaction was compliant with its policy, and offered no further details.

Despite this apparent blip, ShareAction calls Barclays’ net-zero strategy ‘best-in-class’ because the bank includes an interim target for its net-zero strategy: to halve the impact of its financing activity by 2030.

Only a small handful of banks in the NZBA have committed to implementing science-based targets through the Science-Based Target initiative. And only two, La Banque Postale and Korea’s KB Financial Group, have had their targets approved.

Finally, unlike most others, Barclays includes Scope 3 emissions within its targets, and expresses its fossil fuel targets in terms of absolute emissions, rather than intensity.

Other contentions exist, but one thing is clear: the credibility of GFanz is under intense scrutiny. While the headline $130trn commitment to net zero is positive, until the signatory institutions can outline clearer policy ambitions on achieving it, the jury is out on how serious the banking sector really is.