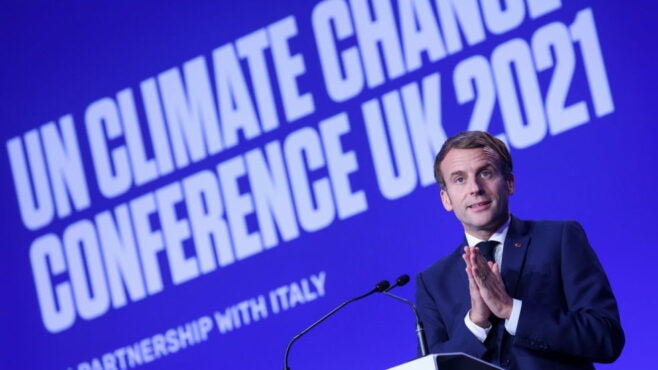 French president Emmanuel Macron’s government – like other developed nations – is failing to do what is needed to facilitate capital flows into emerging markets, say investors. (Photo by Yves Herman – WPA Pool/Getty Images)

Blended finance has long been held up as a solution for providing much-needed development capital to emerging countries. The concept relies on combining investment and expertise from the private and public sectors to that end. But the level of collaboration is still falling well short of what will be needed to achieve, among other things, net-zero emissions globally or the UN’s Sustainable Development Goals.

That has been highlighted both during and since the Cop26 summit last month by investment industry big hitters and new reports from the likes of the Net-Zero Asset Owner Alliance (NZAOA), sustainability initiative One Planet Lab and blended finance network Convergence.

What investors see as lacking are deals of sufficient scale and quality backed with support from governments and development finance institutions (DFIs) and donor organisations. A stark example is the failure of richer nations to deliver on a promised $100bn a year in climate finance to poorer countries.

Aggregate blended finance flows total just over $160bn and have seldom topped $10bn annually, according to Convergence (see chart below). That is a drop in the ocean when set against the $130trn of private finance claimed to be available for deployment, and the estimated $60trn it could take to bridge the emerging market infrastructure gap.

More specifically, developing markets may need up to $1trn a year to build a net-zero economy, according to the NZAOA report. But annual energy transition investment into emerging markets stood at $178bn last year, according to research by HSBC published in April.

Accordingly, the climate crisis and post-Covid rise in social and human rights problems have fuelled increasingly urgent calls for solutions to the barriers hindering blended finance.

The NZAOA sees as a major obstacle the perceived risks of emerging markets, such as those from currency, politics and regulations. Moreover, the institutional investment market has a strong, regulation-driven bias for investment-grade debt opportunities – and 88% of emerging markets are non-investment grade, according to Bloomberg. Other issues include emerging economies’ relatively immature capital markets and their lack of transparency, scale and specialist deal expertise.

Governments "not doing what they need to"

Ultimately, the money is there to be allocated, but more blended finance facilities are needed to mobilise private finance to help the developing world access climate finance, said UN climate envoy Mark Carney at Cop26.

Similarly, Günther Thallinger – a member of the board and chairman of the group ESG board at German insurance giant Allianz, and chair of the NZAOA – tells Capital Monitor: “The capacity on the financing side is not up for debate. This is really there.

“It’s enormously important that governments in certain countries who really want to benefit from the full capacity that’s available for financing the transition are approaching this with a pipeline of projects,” Thallinger adds.

There is a significant failure to address the shortfall of private sector funding levels going into climate finance. Liam Byrne, British MP and chair of the Parliamentary Network on the World Bank and IMF

There is a significant failure to address the shortfall of private sector funding levels going into climate finance, agrees Liam Byrne, British Member of Parliament and chair of the Parliamentary Network on the World Bank and IMF. Speaking at The Future of Climate Finance event hosted by Capital Monitor and the New Statesman on 23 November, he said that “this reflects that politicians are just not doing what they need to fast enough to help make that private sector finance possible”.

“Mobilising climate finance is one of our key objectives for the next two years,” he added.

Philippe Zaouati, chief executive of Paris-based sustainability-focused asset manager Mirova, has become so frustrated with the lack of progress on blended finance that he has publicly called out the French government. In a post on LinkedIn last month, he said he had spoken to President Emmanuel Macron at the One Planet Summit in January about the difficulties of implementing blended finance, such as scale and risk.

Zaouati had suggested to Macron that One Planet Lab – an initiative comprising high-level sustainability experts, of which is he is a member – develop concrete proposals to accelerate collaboration between public and private finance. 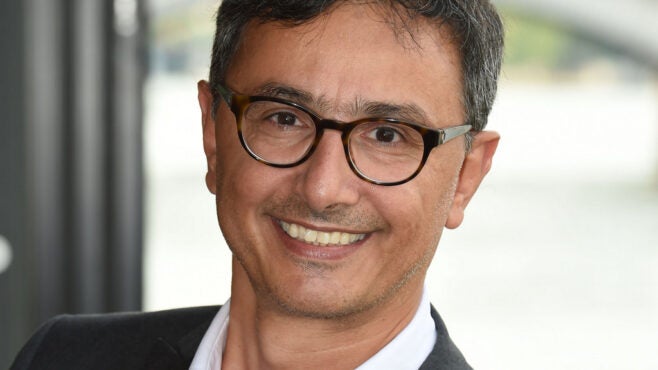 Philippe Zaouati, CEO of Mirova, wants to see public and private sector professionals come together to create a consensus around blended finance. (Photo courtesy of Mirova)

The kind of initiative that Zaouati would like to see is one where public and private sector professionals come together to create a consensus. For example, he wrote, France might have proposed, during its presidency of the EU that will start next month, “a coordination of all European public donors to build a shared vision and a standardised process for the creation of blended finance schemes”.

His suggestion was apparently not acted on. “Too bad. This will be a missed opportunity,” Zaouati lamented.

One Planet Lab subsequently published a report at Cop26. In his post he said it was one more paper “that no one will read and that will have absolutely no concrete consequences. This is not the way I think governments should use their ability to convene the different actors."

The need for greater deal scale

It does not help that blended finance projects are developed individually. “Fragmentation is costly, process-heavy, creates assets that are too small for institutional investors and does not invite rapid replication or scaling,” says the One Planet Lab report.

Donor capital is currently very narrowly focused by region, sector and/or theme – such as sub-Saharan Africa or women’s empowerment – thereby limiting the investment universe and the scale of blended finance vehicles, the NZAOA paper notes.

It goes on to say that the median size of blended finance vehicles between 2017 and 2019 is just $65m, citing data from Convergence, and that large and sophisticated institutional investors typically seek to allocate at least $150m in debt investment or $50m in equity investment per deal.

Given that institutions cannot usually account for more than 20% of an investment vehicle, blended finance debt vehicles need to be at least $750m in size and blended finance equity vehicles at least $250m, says the NZAOA paper. It recommends that private capital mobilisation should become eligible for official development assistance (ODA – effectively, foreign aid), regardless of its target in terms of region, sector or theme.

Indeed development partner commitments to blended finance stand at just 2% of total ODA and just $10bn to $15bn of project volumes annually, according to the One Planet Summit paper.

Lack of data and understanding

She also highlights other obstacles – one being that many investors do not understand the concept. “There hasn’t been all that much private sector engagement on blended finance,” adds Nikolova. As a result, she has often found herself spending “the first 30 to 40 minutes of the conversation explaining what blended finance is”.

A lack of familiarity with emerging markets also remains an issue. Despite increased interest from investors in such assets, with an eye on boosting portfolio returns, there remains a perception that they pose more risk than developed economies.

Blended finance is designed to help mitigate such risks and rebalance the risk-reward profiles in developing countries. Such deals often see donors or DFIs, such as the World Bank or Asian Development Bank, take first-loss risk on investments to attract private capital.

What’s more, says Nikolova, data from the Global Emerging Markets Risk Database Consortium on the historic performance of development banks shows that historic default rates are consistent with what is expected of non-investment-grade deals.

Günther Thallinger, chair of the ESG board at Allianz, says countries that want to benefit from blended finance need to provide development plans. (Photo courtesy of Allianz)

But debt recovery rates are not published. “So when things go bad, we don’t have an idea of how much of our investors’ capital we are getting back,” she says. “Which is a shame, because the data which was published was consistent with the idea that perceived risk [in emerging markets] isn’t as high as actual risk.”

Upcoming EU legislation, such as the EU taxonomy, will need data to qualify a sustainable investment, Nikolova adds.

Another issue is that investors often argue that DFIs crowd out private capital by taking the best deals. “That hasn’t changed,” says Nikolova. “It’s challenging for DFIs, because on the one hand they are asked to mobilise private capital, and on the other they’re taught to be AAA and to deploy their own balance sheets. At some point, these two priorities are conflicting [with] each other.”

Allianz Global Investors has been involved in a handful of blended finance deals, one being its $500m commitment, made in 2017, to co-invest with the International Finance Corporation (IFC) – the World Bank’s private sector arm – in emerging market infrastructure projects. Allianz Global Investors' clients state a preferred return, and IFC takes the first loss on investments up to their committed capital.

Working with the DFIs to set up such a platform is a challenge, Thallinger says. Countries that want to benefit need to provide development plans, he adds, including showing the form that projects will come in and how they can be supported.

South Africa has set a good example of this. Speaking at the Future of Climate Finance event last month, Adam Matthews, chief responsible investment officer for the Church of England Pensions Board’s £3bn portfolio, said that at Cop26 South Africa delivered an ambitious and credible pathway to net zero that could attract country-level and private capital.

Acccordingly, the Europe, the UK and the US committed $8bn of funding after the country came out “with a pretty credible nationally determined contribution [NDC] to transition” from largely coal power-based generation to renewable energy, added Matthews. NDCs are non-binding national plans on climate action, including emissions-reduction targets and proposals on how to achieve them.

“Now [$8bn] is not enough to decarbonise South Africa, but it is probably enough from public finance to enable private finance to then come in behind in a credible way to enable South Africa to achieve its goal,” said Matthews.

South Africa’s NDC was a signpost that such national agreements need to be very practical, he added, with the plan set to require a transitioning of the workforce in South Africa.

Public-private investment partnerships across all the major emerging markets, he said, could enable a “patchwork of these kinds of agreements that enable a much more ambitious global agreement to come into force in due course”.

Perhaps the urgency of the environmental crisis will at last accelerate such action and inspire the kind of effort that is badly needed from both sides of the table.