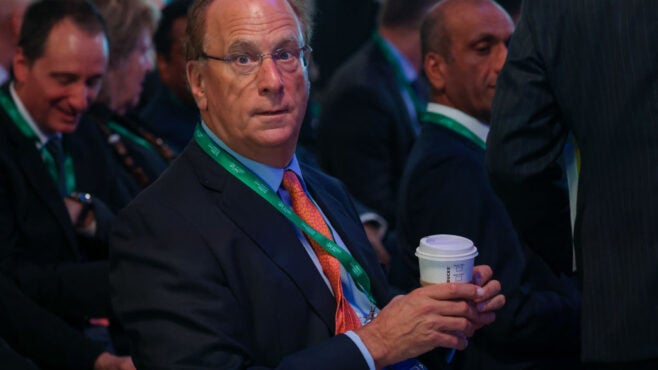 We’re as suprised as you are: Part of BlackRock CEO Larry Fink’s bonus is linked to ESG factors. (Photo by Hollie Adams/Bloomberg via Getty Images)

Banks are proving keener than asset managers to incorporate ESG targets into the bonus pay of their chief executives, according to exclusive Capital Monitor research.

The report, ‘Linking CEO Remuneration to ESG Targets: The Top 100 Asset Managers’, is based on data provided by Capital Monitor sister company GlobalData. It shows that, globally, only 11 of the largest 100 asset managers, measured by assets under management (AUM), link their CEO’s bonus to environmental factors, compared with 25 of the top 100 banks.

Fund managers such BlackRock ($9.4trn AUM) fit into the 11%. Half of CEO Lawrence Fink’s $28m bonus for 2020 was down to non-financial indicators. Not all would come under the ESG banner, but some that did include the company publishing its Sustainability Accounting Standards Board (SASB) and Task Force for Climate-related Financial Disclosures (TCFD) reports, sustainable fund development, as well as its diversity hiring drive.

Valérie Baudson, appointed last year at the helm of Amundi ($1.8trn AUM), Europe’s largest asset manager, will have the opportunity to earn a more modest €2m in variable pay, 30% of which will be tied to non-financial indicators. This includes implementing Amundi’s ESG policy, which to date has covered the integration of ESG screening across its actively managed funds and the growth of AUM for specific initiatives such as energy transition.

Some asset managers paid attention to ratings. With $1.8trn of AUM, Legal and General Investment Management’s (LGIM) appraisal of CEO Michelle Scrimgeour noted the company’s A+ UN Principles for Responsible Investment (PRI) rating. PRI ratings are based on ESG integration to overall investment practices, not just on ESG-labelled products, and consider the scope and sophistication of ESG integration.

The CEOs of LGIM, DWS and AMG were rewarded for advancing their firms’ stewardship of portfolio companies, while Schroders ($938bn AUM) and Generali had targets for integrating ESG processes across their fund range.

Banks tended to have a slightly different set of CEO ESG bonus targets, with a focus on sustainable finance volumes, emissions from offices and business travel, and ESG ratings. Both sets of institutions tended not to look at the impact of ESG initiatives. The success of ESG-labelled funds or of stewardship programmes tends to be measured in volumes of AUM or number of votes, rather than the impact of the investment or impact of voting.

It was a similar story for banks with regard to sustainable finance volumes, with the focus largely on volumes rather than impact. Two banking groups, ING and NatWest, had bonus targets that incorporated how their institutions were influencing clients. This was more common in asset management, where stewardship is beginning to form a core part of ESG policies.

Neither State Street Global Advisors ($3.9trn AUM) or JP Morgan Asset Management ($4trn AUM), both in the top ten asset managers by AUM, had environmental targets, but did have social and governance targets related to gender diversity. Diversity targets were incorporated into CEO bonus targets by 21 asset managers.

In many cases, remuneration data was not publicly available. This was the case for large as well as small asset managers, with Vanguard ($7.2trn AUM), Fidelity ($4.2trn AUM) and Capital Group ($2.6trn AUM), three of the ten largest asset managers, not disclosing. Part of the reason is because they are unlisted, and so do not disclose proxy reports or annual reports that usually contain this data.

However, more pressure will come to disclose as many are publishing TCFD reports, with the TCFD itself saying companies should disclose whether ESG metrics are considered in variable pay.

Schroders and BlackRock were among the more transparent, with clearer information on total pay, targets set, key performance indicators (KPIs), weightings (the percentage of bonus allocated to one target), assessments (how much each target was achieved) and evaluations (explanations of the assessment) than other asset managers. These were reflected in high scores for transparency, with points awarded for transparency in each of these six categories.