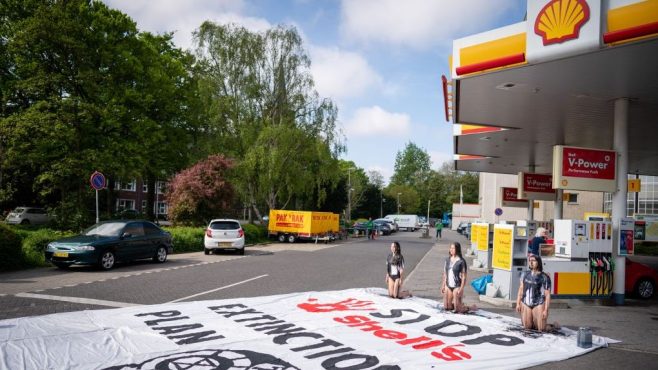 Protestors at a Shell petrol station in The Hague on 18 May 2021. (Photo by Bart Maat / ANP / AFP via Getty Images)

Last month’s shock court ruling ordering oil major Shell to quicken the pace of cutting its carbon emissions was hailed as a great success by environmentalists – but the markets barely flickered.

Delving into aspects of the Dutch court case – some of which are fairly unusual and include human rights arguments – shows that investors in carbon-intensive industries should be more concerned, experts argue. Ultimately, the ruling is the latest sign of the tide turning against the energy giants, which are facing hundreds of lawsuits globally.

“It’s not necessarily more likely that other oil and gas companies will be forced by a court to reduce their emissions, but the risk of being part of such a case has increased significantly,” says Christoph Seibt, a Hamburg-based corporate partner at law firm Freshfields Bruckhaus Deringer.

Such suits are on the rise, “and they’re not making corporate reputation management any easier”, he tells Capital Monitor. “That means the risk has increased for heavy-emitting companies and their stakeholders [irrespective of the outcome of any appeal].”

Accordingly, he is advising his clients – largely German corporates – to take the judgment seriously and start strategic reviews of their emissions reduction targets. 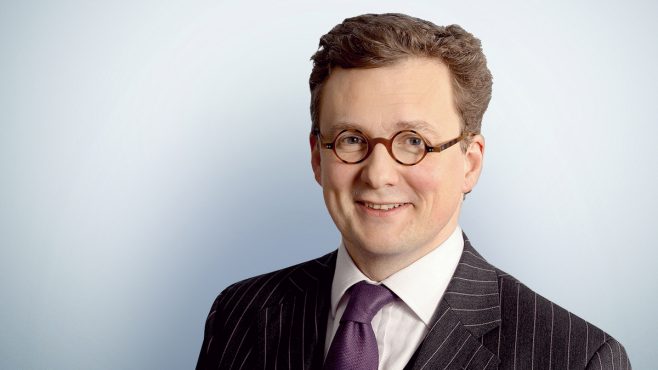 Mike Coffin, senior analyst at think tank Carbon Tracker, makes a similar point. “If Shell is forced to change, then its competitors’ legal and financial risks will undoubtedly increase, and investors are likely to increase the pressure with shareholder votes in anticipation of future litigation,” he says.

Indeed, this AGM season has been lively for oil giants generally. In the space of 24 hours in late May, in addition to Shell receiving its court order, activist hedge fund Engine No. 1 got three of its own directors elected to the board of ExxonMobil, and 61% of Chevron’s shareholders voted in favour of a separate activist proposal to speed up its emissions reduction plan.

At its own AGM just weeks before the court decision, Shell had just presented its energy transition plan, which it said was Paris Agreement-aligned. The vast bulk of shareholders (89%) voted in favour of the strategy.

Yet Paul Benson, climate lawyer at environmental charity ClientEarth, says: “There’s a striking difference between Shell’s own targets and what the claimants were asking for. They can’t both be Paris-aligned.”

The court also noted discrepancies between Shell’s public communications and its actions. Such points are likely to be referenced in cases elsewhere. While foreign judgments are not legally binding, Benson says principles and concepts from other jurisdictions are often used by courts.

The main question put to the court was whether Shell’s existing climate transition policy was rigorous enough to reduce its CO2 emissions by the end of 2030 – the answer being a resounding ‘no’.

The core of the ruling served in The Hague district court on 26 May was that Shell must “at once” start to reduce its absolute CO2 emissions coming from the group, its suppliers and customers by 45% – across scopes 1, 2 and 3 – by 2030 compared to its 2019 level. Shell already had a target of 20% full-cycle emissions intensity reduction by 2030, which will scale up to 45% by 2035 and net zero (absolute and intensity-based) by 2050. These are more ambitious goals than those of most of its peers, according to Credit Suisse.

Meanwhile, the case – brought by seven environmental groups and 17,000 Dutch citizens as co-claimants – was unprecedented in various important ways.

For one thing, the judge made the ruling preliminarily enforceable. That is unusual in a case of this kind, say experts – typically, it would not be enforceable until the appeals process had come to an end. As a result, Shell must press on with making the ordered changes to its climate policy amid an ongoing appeal process, which could take up to four years.

A Shell spokesman said the company was continuing to review the judgment and its implications. They declined to comment further.

The case also represented several world firsts: it was the first time a company’s climate policy had been found inadequate by a court of law, a corporate group had been ordered by a court to cut its emissions, and a court had used human rights grounds in this context against a corporate group.

The plaintiffs used Dutch tort law to demonstrate Shell’s duty of care to citizens’ right to life and, unusually, the ruling references two ‘soft law’ instruments: the UN Guiding Principles on Business and Human Rights and a European Commission strategy paper from 2011. Soft law instruments, such as corporate governance codes, are not legally binding.

“That’s a pretty strong use of soft law. The judge is arguing that the Guiding Principles and Paris Agreement compliance are not optional, and that companies have to take measures to limit any adverse human rights impacts of their business,” says ClientEarth’s Benson.

While Shell is a Dutch company and many facts of the case are specific to the Netherlands, the duty of care concept is present in many other legal frameworks.

Running concurrent to the Shell ruling, a group of child claimants in Australia used the same grounds in a case brought against a government plan to expand a coal mine. While the judge ultimately rejected their bid, he ruled that environment minister Sussan Ley had a duty to protect younger people against the effects of climate change.

Shell shareholders seem either unaware or unconcerned about such issues or the mounting risks given the lack of movement in the share price since 26 May. In fact, the ruling could even be viewed as ultimately positive for the oil group’s business and its investors in that it would lead it to reduce its stranded asset exposure, Benson says.

However, some large institutions have been outspoken on the judgment. In a blog, UK financial services group Legal & General drew comparisons to the landmark tobacco cases of the 1990s, which led to huge payouts by cigarette makers. “The market’s apparent view that the judgment is a ‘non-event’ and can be ignored does surprise us,” added the firm.

As UK fund house Aviva Investors has said the judgment showed that “oil majors need to start making production cuts, and that will potentially influence their stranded asset risk”.

Indeed, Credit Suisse analysts said in a note on 27 May that the court order could force Shell to shrink its overall business. That’s because it will have to scale back certain activities quicker than planned (see chart below).

“European oil majors realise they have to change,” agrees James Jampel, founder and co-CIO of New York-based Hite Hedge Asset Management, which runs one relative-value strategy that is carbon-neutral and another that is short carbon in that it short-sells highly polluting companies.

“It might economically be the right thing to do, but they’re also conscious of their social licence to operate,” he adds. “And the court is almost trying to remove or diminish that social licence [from Shell].

“We often hear people say that oil and gas is going to be around a long time. I don’t necessarily disagree, but I’m still not sure anyone’s going to make any money out of it,” Jampel says. “Around the world, more and more people are viewing these products as poisonous. That’s just not an attractive investment.”

While the recent events have not had an immediate impact on the credit ratings of Shell, ExxonMobil or Chevron, they show capital market access could become more difficult and more expensive, says Thomas Watters, Standard & Poor’s oil and gas sector lead. Funding costs for carbon-intensive borrowers are already around 75 basis points higher than for lower emitters, based on recent spreads, according to the rating agency. 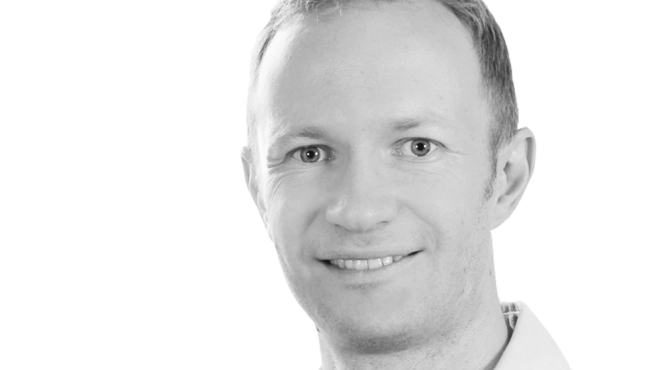 Paul Benson of ClientEarth: “There’s a striking difference between Shell’s own targets and what the claimants were asking for. They can’t both be Paris-aligned.” (Photo courtesy of ClientEarth)

“We took the view that it’s not a credit event... but it underscores the decision we took in January – the risks for oil and gas are increasing,” says Watters.

Be that as it may, critics of the ruling argue that policy changes are needed, rather than a piecemeal approach. They say targeting individual companies could simply lead them to sell their more environmentally harmful assets, which would not reduce overall emissions.

That’s an argument Shell itself has put forward. In a LinkedIn post two weeks after the ruling, chief executive Ben van Beurden wrote that it merely represented an acceleration of Shell’s existing strategy. Arguing against the efficacy of such an approach, he said: “Imagine Shell decided to stop selling petrol and diesel today. This would certainly cut Shell’s carbon emissions. But it would not help the world one bit. Demand for fuel would not change.”

We often hear people say that oil and gas is going to be around a long time. But I’m still not sure anyone’s going to make any money out of it. James Jampel, Hite Hedge Asset Management

A policy shift may well be on the cards, regardless of the outcome of any appeal. There’s an argument to be made that the framework regulating emissions is not clear enough, given the discrepancies between Shell’s initial climate plan and what the plaintiffs were requesting.

“Now that we’ve seen these first-instance cases, where the outcome is that the existing standards aren’t clear enough, it’s possible that legislation will follow,” says Seibt.

And the duty of care issue could be at the heart of it. “The judgment only tackled human rights violations on the sidelines,” he says, “but that same principle could be easily transferred to other types of cases.”

Seibt points to the EU’s incoming supply chain due diligence legislation that followed a string of cases in which European companies were criticised for human rights violations in their supply chains: “Maybe the next [issue to face such treatment] will be CO2 reduction – why not?”