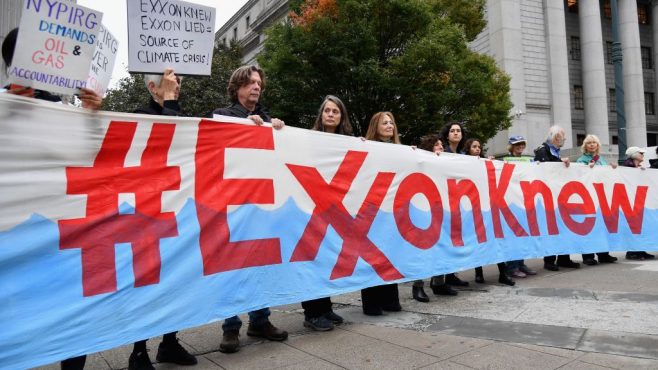 Climate activists protesting outside an ExxonMobil trial in New York in October 2019. (Photo by Angela Weiss from AFP via Getty Images)

“Chicken Little’s hysteria about the sky falling was based on a fact that got blown out of proportion,” reads a US advert created in 1991 by the now defunct Information Council on the Environment. “It’s the same with global warming. There’s no hard evidence it is occurring.”

That advert (which originated from a European folk tale) and others like it are key to a small but growing number of lawsuits unfolding across the US. Lawyers allege that oil and gas companies – or ‘Big Oil’, collectively – knew about the damaging effects of burning fossil fuels decades ago, yet continued to spread disinformation to the contrary, just as tobacco manufacturers misled people about the link between cigarettes and cancer.

In recent years, states and municipalities across the US have filed a rising number of suits against oil and gas companies and trade associations. Plaintiffs include the states of Connecticut, Delaware, Massachusetts, Minnesota and New York (see graph and table below).

The New York case accused ExxonMobil of securities fraud, alleging that the company misled shareholders over the true costs of climate change, but the oil giant was acquitted and disputes the claims. The others use consumer protection grounds to allege misinformation campaigns and fraudulent advertising – and this is seen as potentially key for their prospects of success.

These latter suits bear some similarities to those brought against tobacco companies in the 1990s that resulted in a $6.5bn master settlement with the state of Minnesota in 1998. That’s no coincidence – lawyers on both sides are borrowing arguments from tobacco cases of the past.

“The key questions are going to be: who knew, what did they know, and when?” says Stanford University professor and science historian Robert Proctor, who has served as an expert witness in multiple tobacco cases.

The key questions are going to be: who knew, what did they know, and when? Robert Proctor, Stanford University professor and expert witness in tobacco cases

“It’s clear that some of these [oil] companies knew about the threat of climate change for many decades and mounted campaigns to deceive the public about the nature and magnitude of that hazard. That’s what’s going to get them in trouble – and it’s identical to the tobacco industry’s strategy.”

This comparison is important, because not only were the damages paid by the cigarette makers unprecedented but, arguably more importantly, they laid the groundwork for major policy changes that have transformed social perceptions of smoking. Plaintiffs and climate activists are hoping for a similar outcome for fossil fuels.

All this is of relevance and interest to investors in the oil and gas industry, many of which are grappling with the question of whether divestment or engagement is the right approach to this sector and, indeed, whether such companies are part of the solution to the energy supply problem, as many in and outside the industry believe. It also comes as US president Joe Biden puts climate change high on his political and regulatory agenda.

Individuals had been bringing lawsuits against tobacco companies since the 1950s, largely on product liability grounds: that the product sold was defective or dangerous by design. They all failed.

It was only when states started bringing cases, and lawyers began looking at the conduct of management teams, that the gears started to shift, says Doug Blanke, director of the Public Health Law Center at the Mitchell Hamline School of Law. He served as assistant attorney general of Minnesota in the 1990s and played a key role in the tobacco case.

“For us, it was less about the product and more about the behaviour,” he says. “And when we shifted focus to the companies and executives, the litigation assumed a different role in society. It contributed to a sea change for the adoption of public policies addressing tobacco.” 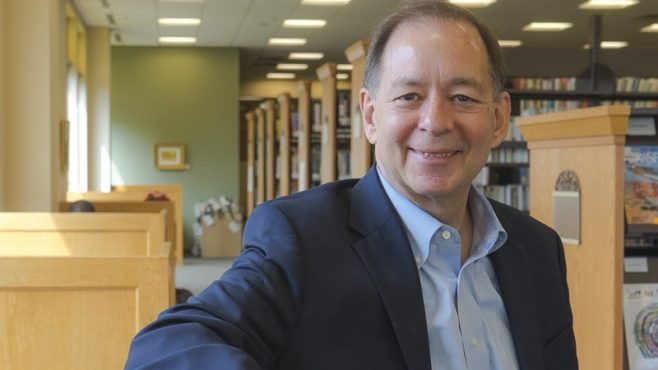 Doug Blanke of the Public Health Law Center at the Mitchell Hamline School of Law says the oil industry has even deeper pockets than Big Tobacco. (Photo courtesy of Doug Blanke)

As such, these cases touch on every environment, social and governance (ESG) element: the environmental damage caused by oil and gas production, the impact the damage and the misinformation campaigns have had on society, and the business decisions and industry culture that perpetuated it.

Moreover, as part of the 1998 master settlement agreement, tobacco companies were ordered to release some 14 million documents, which are still publicly available. They continue to serve the public good: they are regularly used in cases brought by private plaintiffs.

Some of the recent cases against oil companies claim public nuisance; others deceptive advertising, consumer fraud, deceptive trade practices, misrepresentation, and failure to warn. While public nuisance suits require proof of a causal link between a company’s actions and the environmental impact – which can be difficult to demonstrate – the other strategies centre on the now well-understood concept of greenwashing.

In relation to Minnesota’s suit against ExxonMobil, Koch Industries and the American Petroleum Institute, state attorney general Keith Ellison said at a press conference for the suit’s launch in June last year: “For 30 years the defendants made misleading statements about climate change, the relationship between climate change and their fossil fuel products, and the urgency of the problem. For 30 years they lied, deceived, muddled the facts and created a false controversy when there really wasn’t one.”

The causal link between corporate activity and environment impact is difficult to prove – but not impossible. Sophisticated analysis, such as that provided by the Climate Accountability Institute, can now attribute emissions to specific companies. Sharon Eubanks, who was lead prosecutor on the federal fraud trial against cigarette makers in the early 2000s, says such data will be important in establishing liability.

Mitchell Hamline’s Blanke believes the fact patterns between these cases are very similar and that internal company documents will be central.

“The documents really are the secret to breaking things open,” he says. “It’s not so much about finding completely new information; more that these companies have been saying it themselves – and maybe they said it 25 years ago – and then comparing that with what they were saying publicly. Bringing that juxtaposition before a jury was extremely powerful.”

Minnesota attorney general Ellison told the US’s National Public Radio in June last year that the prosecutor’s office had access to files dating back to 1979 confirming that various officials at Exxon Engineering, as it was then called, knew of the dangers of burning fossil fuels. One reads: “[CO2 concentration] is now 15% greater than it was in 1850 and the rate of CO2 release from anthropogenic sources appears to be doubling every 15 years. The most widely held theory is that the increase is due to fossil fuel combustion.”

And yet, the state claims, Exxon and its competitors continued to seek to cast doubt on these facts by running extensive advertising campaigns, targeting schools with educational materials and donating heavily to groups that spread misinformation. ExxonMobil donated nearly $31m to 69 such entities between 1998 and 2014, according to environmental lobby group Greenpeace.

When asked for comment on the Minnesota case, an Exxon spokesperson told Capital Monitor: “Lawsuits like this have no merit. They do not belong in the courts and do nothing to advance meaningful efforts that address climate change. We support global efforts from policymakers, companies, and individuals to develop real solutions.”

Another common rebuttal voiced by the oil industry is that it’s unfair to blame a small number of companies for emissions produced to service the public.

Phil Goldberg is managing partner at Washington, DC-based law firm Shook, Hardy & Bacon, which defended tobacco companies in the 1990s. He’s also special counsel of the Manufacturers’ Accountability Project, which pushes back against what it calls “abusive” litigation campaigns that “seek to transform major public policy challenges into profit-making lawsuits”.

Lawsuits like this have no merit. They do not belong in the courts and do nothing to advance meaningful efforts that address climate change. Exxon spokesperson

The comparison between the tobacco and oil cases is not appropriate, Goldberg argues, because fossil fuels are essential to modern life but cigarettes are not. He declined to comment specifically on the tobacco cases.

“Just because a company manufactures a product that has externalities and hazards down the line, it doesn’t mean that company is legally responsible for those impacts,” he tells Capital Monitor. “If I sold you a knife and you stabbed someone, I’m not responsible for that. Climate change is something we are all contributing to.”

This focus on individual culpability for climate change has been pervasive in society – and Proctor of Stanford University feels the industry is partially responsible for spreading it. “It’s a very clever confusion. They’re trying to redefine the climate crisis as a crisis of individual behaviour,” he argues. “And that’s exactly what the tobacco industry did.”

The American Petroleum Institute seeks to stress the benefits of oil and gas to the public. Chief legal officer Paul Alfonso says: “The record of the past two decades demonstrates that the industry has achieved its goal of providing affordable, reliable American energy to US consumers while substantially reducing emissions and our environmental footprint. Any suggestion to the contrary is false.”

It is hard to say whether the latest suits against oil companies will succeed – and they could drag out for years. They certainly face formidable challenges.

The US judicial system has changed considerably over the past 20 years. There are generally more conservative judges in the US now, and changes to class action rules have made it harder for individuals to sue as a group.

In the Minnesota case, around 60 law firms were working for the tobacco companies, Blanke points out. The oil and gas industry boasts some of the biggest conglomerates in the world with even deeper pockets and stronger political connections.

But businesses are also considerably more interconnected. If just one of these cases is successful, and investors lose money as a result, that could prompt a tsunami of securities suits that could drag on for decades. What’s more, public sentiment and policy has rapidly evolved on environmental issues in recent years.

“If harm is suffered by greenwashing, and there was a misrepresentation to shareholders, that would be a strong case,” says Maurice MacSweeney, director at Harbour Litigation Funding, a London-based firm dedicated to investing private capital in litigation.

“Climate change is a much bigger health emergency than tobacco,” he tells Capital Monitor. “Either these companies change or litigation will encourage them to do it.”

The outcome of the current spate of suits could well be pivotal in this debate.