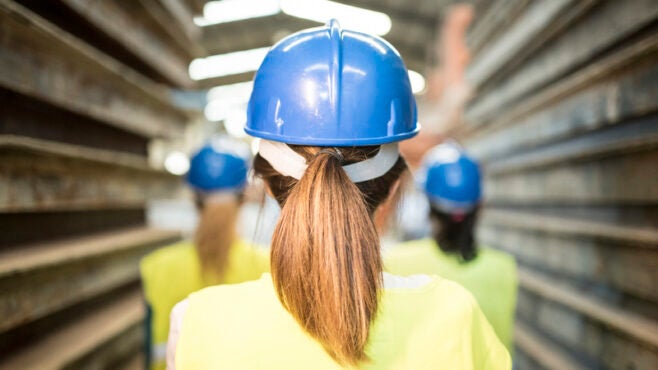 Women are a relatively rare sight in the construction sector. (Photo by July Alcantara from iStock)

The building industry has traditionally been a male-dominated bastion, but with the focus on gender diversity rising there are those who feel that should change.

“The construction sector should not close the doors of its building sites to women, who represent 50% of the population,” says Daniela Bulfaro, project manager at Paris-based Habiter au Quotidien, a French association that promotes social and professional inclusion.

Women make up some 30% of students at engineering schools in France, but only 2% of them come to work in construction, where they are less likely than men to be hired for manual and technical labour roles.

French building company NGE is trying to address this gender imbalance. It refinanced €500m ($564.1m) of debt in December in a deal incorporating three key performance indicators (KPIs), one of which was relatively unusual: increasing the representation of women as managers on its building sites. The other two related to greenhouse gas emissions and accident frequency rates.

“It was quite easy to select the KPIs as we have already committed to making progress in these areas,” Jean-Sébastien Leoni, executive vice president in charge of finance and administration at NGE, tells Capital Monitor.

The group is the first construction and civil engineering company to join the Cercle Interelles, a Paris-based organisation founded in 2001 to help companies make progress on gender diversity issues. Other companies perceived as traditional male bastions to have joined include oil field services provider Schlumberger, French utility Engie and railway group SNCF.

NGE – France’s fourth-largest construction and civil engineering company, with annual revenue of €2.4bn in 2020 – introduced a gender diversity working group in 2017. The following year it committed to having at least 200 female building site managers by 2022, up from 65 in 2018.

We want to increase the proportion of women with this experience eventually moving up the company and onto the executive committee. Jean-Sébastien Leoni, NGE

The focus on increasing the proportion of female building site managers not only contributes to the UN’s Sustainable Development Goal 5 – achieving gender equality and empowering women – but it also supports a strategy of building gender diversity throughout the group.

“We are very much focused on inclusion on the building site, as we want to increase the proportion of women with this experience eventually moving up the company and onto the executive committee,” says Leoni.

“We need to encourage more women into on-site managerial positions from engineering schools and universities, make sure they gain relevant experience and progress,” he adds. “We need to show that they can have a long and interesting career within our industry.”

To that end, NGE has launched several internal initiatives to ensure equal treatment at the recruitment, induction and promotion stages.

On the environmental side, meanwhile, the company announced plans in 2019 to target a 4% cumulative annual reduction in greenhouse gas emissions (see chart below). “Rather than commit to a one-off target in 2030, we want to publicly show a reduction every year,” says Leoni. “2030 is too far away.”

NGE considered incorporating Scope 3 emissions – those not created directly by the organisation but emanating from its value chain. But it decided it was too early to be able to calculate these in the construction industry, Leoni says, given the lack of available data. “Maybe in a couple of years we’ll be able to review it.”

The accident reduction KPI was included because the current accident rate is “just not acceptable”, he says, adding that this ranked as a high priority in a poll of the company’s workers. The KPI targets a cumulative annual reduction in the accident frequency rate against a 2020 baseline of 6%.

With this in mind, NGE has set up a health unit with an occupational psychologist and an ergonomist. It has also implemented a voluntary policy to reduce occupational accidents and illnesses, for which every manager has personal responsibility.

The refinancing was prompted by the arrival of a major new investor. In October, Paris-based Montefiore Investment, which specialises in buying shares in small and medium-sized companies in France’s service industry, bought a 28% stake in NGE. Strasbourg-based cooperative bank Crédit Mutuel Equity had offloaded the same size position after a ten-year hold.

As part of the refinancing, NGE decided to advance its aspirations to have a positive impact through its operations – not only through building gender diversity – by integrating environmental and social features into its borrowing.

The €500m deal – comprising a six-year €350m syndicated loan and €150m in private placement euro notes – also stipulates that NGE makes a donation to specified charities should it fail to fulfil its sustainability commitments. The notes are the first sustainability-linked private placement bonds to be issued in the French regulated market and listed on Euronext.

The €350m three-part loan consists of a €150m refinancing of a conventional 2017 syndicated loan, a €50m capital expenditure line available for drawdown during three years and a €150m revolving credit facility.

“We extended the maturity of the loan, added a new capex line to finance future acquisitions and included an uncommitted facility in case we need an extension of credit,” says Leoni.

We listed the notes because we want to gain wider exposure to the financial markets. Jean-Sébastien Leoni, NGE

Société Générale also acted as global coordinator on the euro private placement exercise, which included a €35m seven-year bond paying an annual interest rate of 3.2% and a €115m bond due in 2029 with a 3.4% coupon. The notes refinanced a private placement issued in 2014.

The margin on the loan was not disclosed, but Leoni says the interest payments are lower than the equivalent for the bonds and in line with the original facility it refinanced. All interest payments from the refinancing instruments are linked to the same KPIs.

If NGE achieves all its KPIs, the notes will pay 20 basis points less than the initial rate. If it complies with two of the targets, there is a 10bp reduction. And if just one target is achieved, there is no discount on the rate.

If NGE misses all of its targets, it will pay 10bp more on the notes and donate an equivalent amount again to non-profit organisations working on the same issues as those addressed by the indicators.

"The overlay of charity contributions is a rare additional feature on sustainability-linked deals," says Jacob Michaelesen, head of sustainable finance advisory at Danish bank Nordea. It has credibility if the nominated charities are related to the company's operations, he adds.

After the close of this transaction, almost a third of NGE’s debt is directly linked to its efforts to achieve its societal ambitions, says Leoni. The company did not say how much was linked before.

Listing notes – as NGE has also done with conventional debt – is relatively unusual for a privately held company, and requires more disclosure than they typically face. But it confers benefits.

“We listed the notes because we want to gain wider exposure to the financial markets,” says Leoni. “We are looking to expand on our portfolio of concession projects, and to do so we need to attract financial investors to support us in our activities.”

NGE’s current concession projects include a container storage facility in Senegal, a number of construction projects at Aïn Atiq, near Morocco's capital Rabat, and the upgrade of the Bras de la Plaine dam on Réunion, an island in the Indian Ocean.

Any debt listed requires approval by the Autorité des Marchés Financiers, the French financial regulator, and publication of a prospectus ensuring disclosure of the issuer-related risks material to investors.

Companies must also provide details of the sustainability credentials of an investment. NGE will include in a dedicated section of its annual corporate social responsibility report its performance against the KPIs and ensure its statutory auditors prepare a verification report on the figures.

Investors – and the building industry – will likely monitor the outcome with interest. After all, changing long-standing culture is never an easy task.