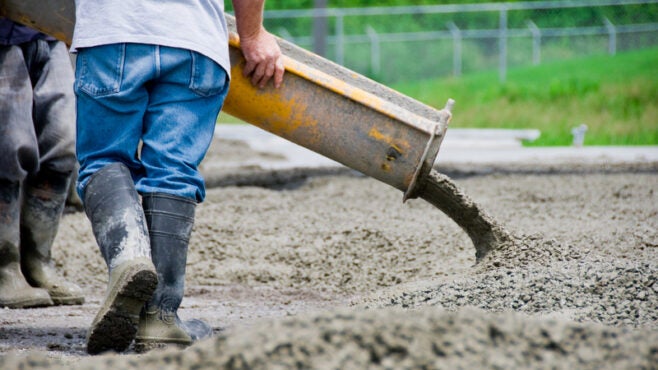 Laying the groundwork: Cement producers have set out a roadmap for achieving net-zero emissions. (Photo by kris_dipietro from iStock)

The global cement industry is a huge polluter, accounting for an estimated 7% to 8% of global carbon dioxide emissions. That exceeds the CO2 output of Germany, France and the UK combined – and indeed of any individual country other than the US and China.

So it may come as a surprise that the Global Cement and Concrete Association (GCCA) in October became the first heavy industry body both to outline how the sector plans to reach net-zero emissions by 2050 and – in a particularly startling move – to push for greater governmental intervention, most notably carbon pricing legislation.

The new roadmap commits the GCCA to a 25% reduction in carbon emissions by 2030 (see also chart below). The association counts 40 of the world’s biggest cement makers among its members and represents 80% of the industry worldwide outside China and 20% of it within China.

This comes as the global cement and concrete products market is expected to almost double from $333bn last year to $645bn in 2030 as governments around the world build and repair infrastructure.

Not only did the association’s members come up with the pledge but its targets were “not challenged by anyone in the industry”, says Thomas Guillot, chief executive of the London-based GCCA.

In fact, measuring a reduction in CO2 emissions and other metrics on a voluntary basis is “one of the conditions” of joining the GCCA, he adds, and cement was the first industry to monitor and report publicly on those emissions on a global level, in 1990.

European cement manufacturers have been swift to embrace both sustainability and the sustainable capital markets.

In late November, Spain’s Cementos Molins upsized and extended a sustainability-linked loan that it had signed in 2019 to €300m ($339m) and pushed out the financing by two years to 2026. On 7 December Germany’s HeidelbergCement received an A rating from environmental non-profit organisation CDP for the third year in a row for cutting emissions. Moreover, CDP upgraded Italy’s Cementir Holding, notable for its use of the world's first serial-produced electric truck mixer, to A- on 9 December.

Switzerland’s Holcim has gone even further down the sustainability path than many of its peers and is so far the only cement producer to sell green, social or sustainable bonds. Most recently, in early November it pledged that 40% of its financing would be sustainable by 2024.

This came after some notable landmarks. Holcim was the first cement group to have its carbon-reduction goals validated by the Science-Based Targets initiative (SBTi), in 2019, and also the first company in the building materials industry to sell a sustainability-linked bond, in November last year.

The €850m ($960m) ten-year 0.5% issue had key performance indicators (KPIs) linked to reducing Scope 1 carbon emissions per tonne of cementitious material from 576kg in 2018 to 475kg by December 2030. It was validated by second-party opinion provider ISS.

Holcim followed up that transaction with a refinancing in August this year of its €3bn syndicated credit line with KPIs linked to climate and safety, in line with the UN’s Sustainable Development Goals 8 (Decent Work and Economic Growth) and 13 (Climate Action).

Then in September it executed a $100m ten-year private placement. Terms for the bond have not been disclosed, but Holcim has said that the KPIs are linked to a reduction in carbon emissions by 2030.

At the analyst call for its first-half results at the end of July, Holcim chief executive Jan Jenisch said sustainability was “very key for us”. He stressed the “huge demand” for its latest concrete products, adding that they have a 30% lower carbon footprint than the previous offerings.

Beyond Europe, however, the GCCA’s net-zero pledge may prove trickier to honour. Growth in emerging markets is, after all, fuelled by infrastructure projects. Globally, the public sector is responsible for 60% of cement purchases, Guillot says.

Accordingly, the association is engaging with governments outside Europe and cites recent discussions it has had with Egypt and Thailand to help them form action plans.

China: The elephant in the room

But the elephant in the room is China. As the world’s biggest cement maker, it accounts for 55% of global production, according to the International Energy Agency (IEA).

The country’s direct CO2 intensity of cement production increased 1.8% annually from 2015 to 2020. But the IEA says a yearly global decline of 3% is needed up to 2030 to get on track with its scenario of net-zero emissions by 2050. 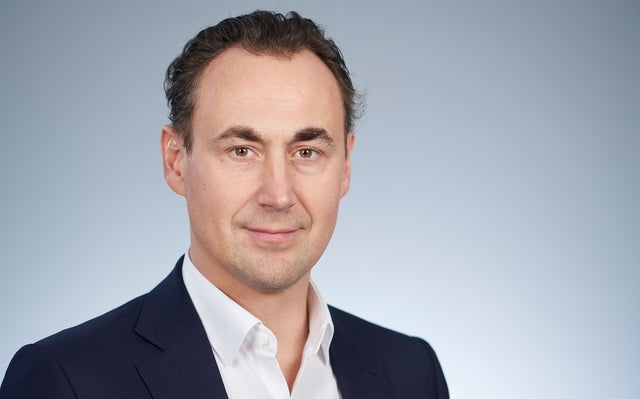 Thomas Guillot, CEO of the Global Cement and Concrete Association, says a carbon price of $100 a tonne  "would not be completely crazy". (Photo courtesy of the GCCA)

The global clinker-to-cement ratio has risen at 1.6% a year since 2015 to hit 0.72 in 2000, according to the IEA. While China boasts the lowest ratio of any country (0.66), that number has risen from 0.57 in 2015 as a result of overcapacity. That has hampered the momentum for more blending to replace clinker, as well as changes to cement standards in China, the IEA adds.

China is the main driver of the global increase, adds the IEA, though at least, looking beyond 2030, “production [of cement] is likely to decline in China in the long term”.

On top of technology, legislation will be needed if the GCCA is to achieve its net-zero targets, Guillot says. “We require the support of government to change regulation that limits the use of recycled materials and impedes the transition to a low-carbon and circular economy,” he said at the launch of the association’s net-zero roadmap. And he wants to see a regulatory framework emerge “as quickly as possible” to accelerate innovation in the industry.

A sensible move, Guillot says, would be a carbon tax – something investors also want to see but that high-emitting companies tend to be less keen on. “The reality is that billions of tonnes of carbon dioxide are emitted in the atmosphere each year at the credit of the planet,” he adds. “We are currently given this for free, but this cannot continue.”

Billions of tonnes of carbon dioxide are emitted in the atmosphere each year at the credit of the planet. We are given this for free, but this cannot continue. Thomas Guillot, Global Cement and Concrete Association

Guillot would not specify what he thinks the carbon price should be, but says the widely mooted $100 per tonne figure would not be “completely crazy”.

A bigger concern for the GCCA is that a tax be imposed equally. “The use of carbon pricing must not lead to distortions of competition between domestic producers and importers,” it says in its net-zero framework. That is echoed by Holcim, which calls for “a level playing field with importers” on its website.

It is difficult to get up-to-date information on how carbon pricing could affect the cement industry. A 2016 CDP report that is still cited frequently says a $10 price for carbon could force a 114% rise in prices for the the most carbon-intensive companies, though that would drop to as little as 10% for the most efficient cement companies.

Of course, the cement industry would have to pass on some of these costs. But Guillot does not believe there would be pushback from buyers – most notably the building industry. “I don’t think people will complain about that,” he says, pointing out that the cost of cement in construction is a “marginal” 5% to 7% of a total project.

Nonetheless, Guillot accepts the cement industry will need to engage with “the value chain” on this. And the construction value chain is an even larger polluter, responsible for almost 40% of carbon emissions from fuel combustion and 25% of such emissions overall, according to ING in its '2021 Climate Report' published in mid-September.

Still, there are positive signs, and some in the construction industry are echoing Guillot’s calls for legislation.

Speaking to Capital Monitor at Cop26 in Glasgow, David Briggs, chief executive of Danish roof window company Velux, says the construction sector is “very disparate” and “doesn’t work efficiently together”. Government intervention will be needed, he adds, “to force us to do some things”.

Also, like Guillot, Briggs accepts there is a necessary cost involved in transitioning to a cleaner economy. Velux has signed longer-term agreements with suppliers that are willing to invest in making aluminium or glass with a lower carbon footprint, he says. “We are not prepared to pay 15% more for goods, but it could be 2% to 3% more.”

The building industry as a whole may not yet agree, but at least some players are singing from the same hymn sheet as Guillot. As he says: “The cost of not doing anything is much bigger… and we all know that.” The question is whether they all act on it.