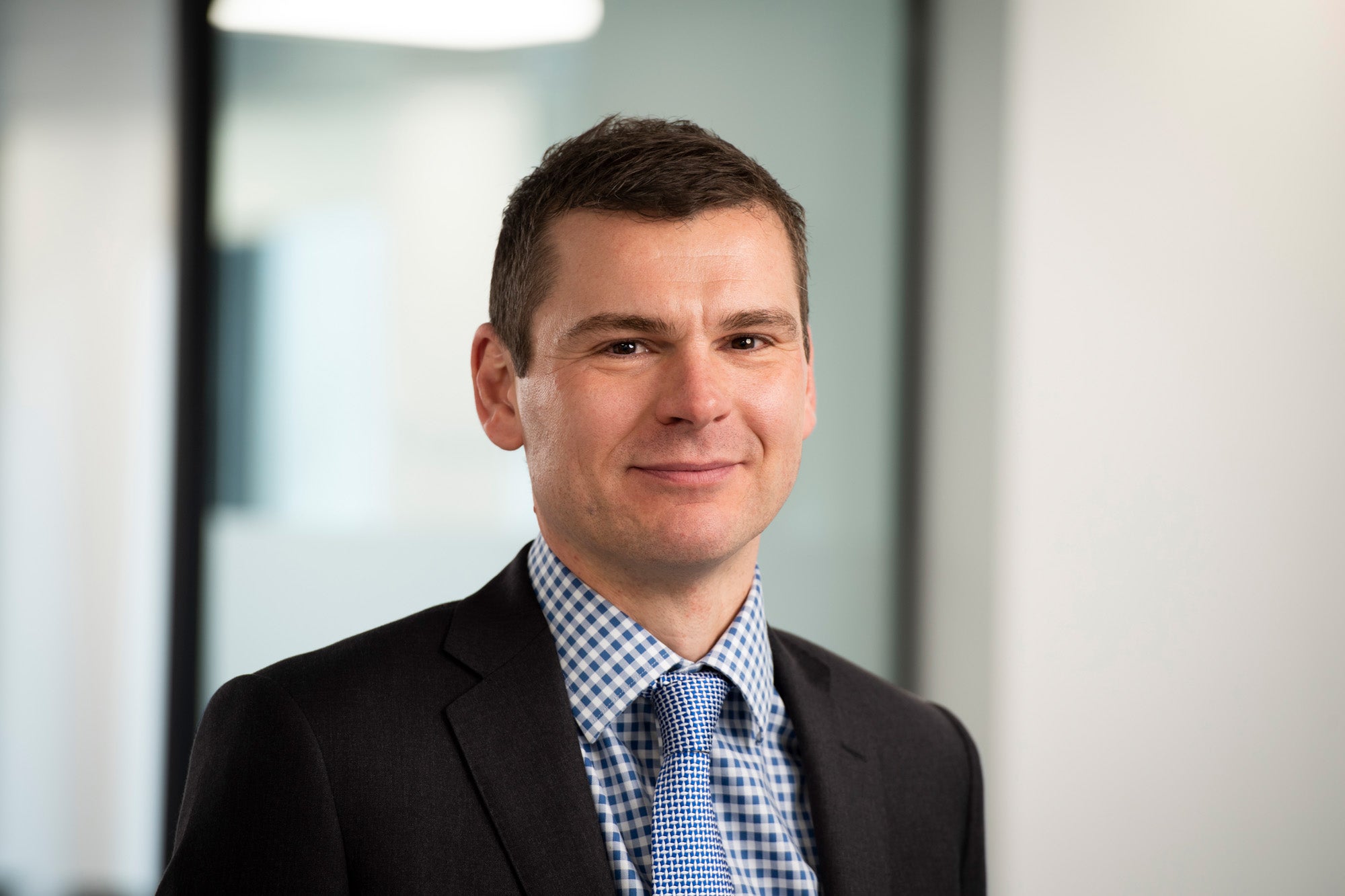 Mark Lyon, head of internal management at Border to Coast Pensions Partnership, is in charge of building out a new ESG data infrastructure. (Photo courtesy of BCPP)

Arguably the biggest obstacle for institutions looking to allocate capital responsibly is sourcing reliable data on the impact and sustainability of their investments.

Acutely aware of this problem, one of the UK’s biggest pools of retirement savings is taking steps to try to resolve it. Border to Coast Pensions Partnership (BCPP) – which oversees the investment of up to £55bn ($76.2bn) for 11 local government pension scheme (LGPS) funds* – is working on building a new ESG data architecture and recently adopted a new ESG framework for alternative investments.

Underlining the fund’s commitment to the sustainable investment cause is its growing focus on carbon intensity measurement, and on diversity and inclusion (D&I) issues, but the fund needs more data if it is to act on those commitments.

BCPP also aims to start reporting on the risk associated with the transition to a low-carbon economy. For instance, it intends to start measuring the carbon footprint of its private market portfolio, an area where data is scarce.

The fund also wants to gather more intelligence on how private market investment managers incorporate ESG into their processes. It has a three-strong responsible investment team but the potential breadth and depth of information is vast.

“We’re working on a project now to try to understand what our ESG data architecture should look like long term,” Mark Lyon, BCPP’s head of internal management, tells Capital Monitor.

“We’re going to need multiple [data] providers over the long term to be able to cover everything, particularly when we start reporting on climate transition, as we’re hoping to do shortly,” he adds. “From what we’ve seen, there doesn’t appear to be one provider that gives us everything that we would necessarily need.

“We want to build all the architecture today that we might need in the future rather than trying to do it piecemeal as things come down the line,” says Lyon.

BCPP started working on the data initiative about three months ago. It has done the initial work to map the market and the available providers, Lyon says. “The next stage is to put together the framework as to how our data architecture should look, longer term. After that, we’ll procure the service providers.”

It employs Dutch fund house Robeco, a specialist in sustainable investment, to help it with corporate engagement. “They will do our voting and advise us on engagement and the themes that they’re covering, which enables us to get scale and influence,” says Lyon. The fund signed a four-year contract with Robeco at the pool’s inception in July 2018 and will review it soon.

In addition, BCPP uses ESG ratings from index and analytics provider MSCI to flag risks or opportunities. It supplements those by employing ESG research firm RepRisk to provide more short-term, forward-looking indicators of potential issues within companies, Lyon adds, “because the MSCI data is a little backward-looking”.

In addition to its in-house equities portfolio, BCPP holds £8bn in listed equities via external managers. But its private market investments are the fastest-growing part of its market exposure.

Including alternative assets and fixed income, the portfolio totals £24.7bn, and more capital is due to transfer from its partner schemes. BCPP plans to add more alternative assets – a multi-asset credit fund, listed alternatives fund and two property funds – in the next couple of years to take it up to around £40bn, says Lyon.

This has come after already ramping up its private markets exposure to £5.7bn recently. The fund announced it had added its first £575m of private credit investments and £2.7bn across infrastructure and private equity, in May and June, respectively.

With this upcoming pipeline, it made sense for BCPP to adopt investment consultancy Albourne Partners’ ESG framework for private markets. It announced the decision in April.

We want to understand what [asset managers’] thought process is when they invest in a company from an ESG perspective – so we can then hold them to account. Mark Lyon, Border to Coast Pensions Partnership

“We’re trying to improve how ESG is integrated into our private market investment processes because it is a fair way behind public markets in that respect,” Lyon says. “We’re [also] trying to nudge the [asset management] industry further along the path of fully integrating ESG into [its] investment processes and reporting.”

The fund went with Albourne’s framework because it had already chosen the company based on a wide range of criteria and after comparison against peer providers, says Lyon. It contracted with the consultancy early last year to provide investment and operational due diligence for its private markets programme. BCPP also wanted to keep its roster of outsourced relationships to “a manageable number”, he adds.

Albourne’s private markets ESG framework is an extension of the UN Principles for Responsible Investment (PRI) framework combined with the consultancy’s investment due diligence.

The consultancy launched its first ESG questionnaire ten years ago and it has since evolved. It chose to base part of the new questionnaire on the PRI due diligence questions because of the benefits of industry collaboration and standardisation, says Emlyn Ade Palmer, head of ESG investing at Albourne.

Asset managers will not necessarily suffer rejection because of how they answer the questionnaire, but what they say could raise flags with BCPP.

In respect of both public and private market asset managers, the fund assesses their ESG framework and how they integrate responsible investing into their investment processes and reporting. “ESG is part of the scoring criteria in the manager selection process,” Lyon says.

Among other things, the questionnaire asks for concrete examples of either engagement or where they have decided to divest from an investment on ESG grounds. “We’re not necessarily looking for exclusions [of certain assets],” he says, “but to understand what their thought process is when they invest in a company from an ESG perspective – so we can then hold them to account.”

Even so, such information one can obtain is tricky to evaluate. “There’s not a common data provider for private markets for ESG,” says Lyon, noting that such managers often lack transparency, particularly the likes of venture capital firms. “So, measuring the impact could be a bit of a challenge.”

Assessing climate impact, however, is a different matter. There are well-developed tools in this area, and BCPP is among the growing number of asset owners measuring portfolio carbon emissions. Canada’s Ontario Municipal Employees Retirement System and Norway’s $1.3trn sovereign wealth fund are just two other examples.

In addition, the UK fund just last month published its second annual Task Force for Climate-related Disclosures (TCFD) report, which sets out in detail its progress in this area.

The fund uses MSCI data to measure the carbon footprint of its public market portfolios against the relevant benchmarks, for both equities and fixed income. It has been doing so for about 18 months and has already made progress on reducing carbon intensity in that time (see graph below).

BCPP has not yet started assessing the footprint for private markets, says Lyon. This is down to both the scarcity of available data and also the relative immaturity of the portfolio.

“That’s going to be a fair challenge because we will be reliant on the underlying managers and the companies that they invest in to provide the data for an aggregator to measure,” he adds.

“Will MSCI measure our carbon footprint in private markets? I don't know – [assessing providers] will be part of the data architecture project.”

As for how BCPP manages its portfolio emissions, when it comes to companies with a higher carbon intensity, “we’re really looking for what their plans are to reduce that intensity over time”, says Lyon.

“Do [our portfolio companies] have aggressive plans to be net zero by 2030 or will it take longer than that? Which of those have credible plans, and which have plans that, while not necessarily greenwashing, maybe lack substance?”

Moreover, at some point BCPP will make some form of commitment to net zero and set commensurate targets and timelines to achieve reductions in portfolio carbon intensity, Lyon says.

BCPP will make some form of commitment to net zero and set commensurate targets and timelines to achieve reductions in portfolio carbon intensity. Mark Lyon, Border to Coast

But before it does so, the intention is to understand the ESG data methodology and what drives change in companies’ carbon intensity, he adds. “We're not just setting a target, and then thinking, ‘how do we get to this?’ It's about having a plan that we think is actually achievable.”

The fund is not alone in seeking to add to the pool of investable information on climate change. A new initiative backed by the retirement schemes of UK telecoms firm BT and the Church of England is working on method to assess the climate risk of government debt.

Meanwhile, BCPP is also ramping up its engagement with investee companies around social issues. Late last year it supported an Albourne initiative around D&I aimed at encouraging asset managers to report to the consultancy in a comparable format.

“We helped Albourne in their assessment of aspects such as: does the manager take D&I seriously? Are there any red flags with managers that we need to be aware of?” says Lyon.

“If we identify that a manager has weak D&I policies or processes, we ask them to talk to us about whether or how they might be addressing this, and then we make a decision as to whether we are comfortable with that.”

As an example, BCPP engaged with a company – which it did not name – because it noticed a decreasing level of gender diversity on the firm’s board, according to its 2019/2020 'Responsible Investment and Stewardship Report', published last year.

The fund sent a letter requesting clarity on the company’s gender diversity strategy, leading to a meeting with the latter’s management and shareholders. Ultimately, a female non-executive director was appointed to the board in early 2020, taking female board representation to 33%.

A positive sign is that D&I issues are receiving a much bigger focus now than in the past among private market managers, Lyon says – as is the case with other areas of ESG, as Capital Monitor has reported.

This trend also reflects the direction of travel among British retirement funds in general. A group representing £1.08trn in assets – and chaired by executives from Brunel Pension Partnership and Lothian Pension Fund – unveiled an Asset Owner Diversity Charter this month. The charter commits its signatories to holding asset managers to account on D&I.

BCPP recognises that its ambitious ESG data plans will take time and flexibility to bring to fruition. As a new institution, it at least has the benefit of starting with no legacy issues, which should streamline its decision-making. Every little will help.

*BCPP is one of the pools set up in 2018 to provide investing scale and efficiency for groups of smaller LGPSs in the UK. BCPP’s local authority funds are those for Cumbria, Durham, East Riding, Bedfordshire, Lincolnshire, North Yorkshire, South Yorkshire, Surrey, Teesside, Tyne and Wear and Warwickshire.