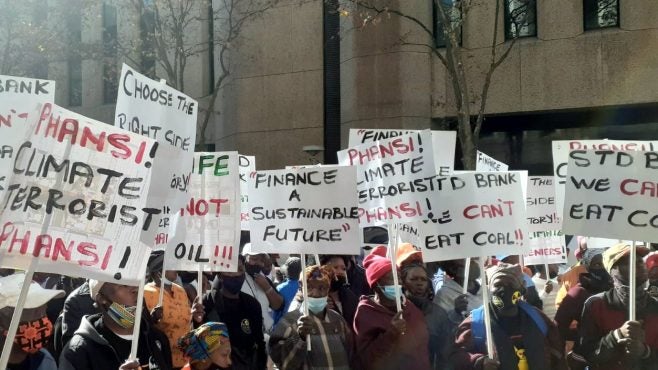 Climate protestors outside Standard Bank’s headquarters on 27 May 2021. (Photo courtesy of Earthlife Africa)

On 27 May, some 100 environmental protestors gathered outside the headquarters of Standard Bank in Johannesburg. They bore placards that read “Finance a sustainable future”, “We can’t eat coal!” and “Std Bank climate destroyer!”, and sang “Shona Malanga” (“The sun is setting”), the Zulu anti-Apartheid protest song. They had re-appropriated the latter as a call for the bank to stop funding the fossil fuel industry.

The demonstration was timed to coincide with the annual general meeting of Africa’s largest lender. Standard Bank chief executive Sim Tshabalala had come prepared for a barrage of climate-related questions; at several points he read from prepared statements. After the event, activists told Capital Monitor they thought his answers were vague and non-committal.

Standard Bank faces growing criticism over its vast investments in coal, oil and gas, with activists and a small group of shareholders calling on it to accelerate its transition to renewable energy.

“It must try to get out of fossil fuels as soon as possible, because once a big body such as Standard Bank says ‘no more’, the smaller investment companies will also be less willing to invest in such things,” says Ulrich Steenkamp of Johannesburg-based non-profit organisation Earthlife Africa, who helped organise the protest. “They must use their power for good, not for polluting our planet.”

And it is not only campaigners putting pressure on Standard Bank, amid the global movement to hold corporations more accountable for their actions in relation to the environment.

Shareholders that have made climate pledges are pushing the bank to go green, Wendy Dobson, the bank’s head of sustainability, confirms to Capital Monitor. 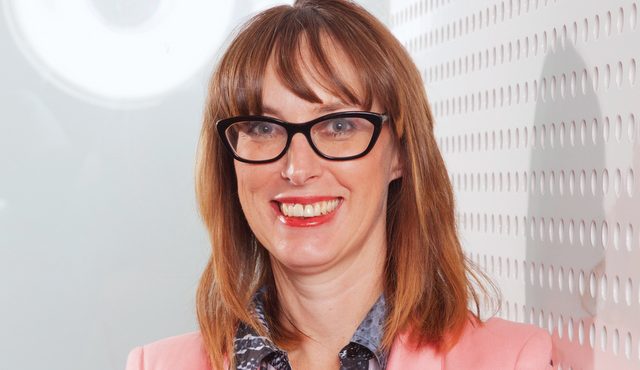 “How a bank the size of Standard Bank is thinking about climate risk – and its exposure to potentially stranded assets – is something that investors are looking at,” she says. “They ask tough questions.”

Dobson cites US fund manager BlackRock as an example of a Standard Bank shareholder that has urged businesses to confront the climate crisis.

Standard Bank is hardly alone among lenders being urged to reduce their fossil fuel exposure. JP Morgan and Finland’s Nordea are just two of many examples under similar pressure, as Capital Monitor has reported.

But campaigners have singled out the South African group because they feel it lags behind its peers in terms of environmental progress. Standard Bank has by far the largest exposure to fossil fuels of any of the country’s big four banks, and the worst ratio of ‘brown’ to ‘green’ lending (see graphs below).

Dobson argues that those comparisons are inappropriate because Standard Bank operates in 20 African countries. “Africa has a real energy deficit – that’s a massive obstacle to Africa’s prosperity,” she says. “So you can’t just switch off fossil fuels overnight.”

Non-renewable energy will still be needed “in the short to medium term”, she adds, and natural gas is “an important transition fuel”. Moreover, the bank’s 2020 environmental report says that since 2012 it has contributed $2.8bn to the construction of new power projects in Africa, 86% of them renewable.

But this emphasis on power stations glosses over myriad other damaging projects the bank is involved with, from oil pipelines to coal mines and gas fields says Tracey Davies, executive director at Just Share.

Particularly controversial is the bank’s engagement with French oil major Total’s planned East Africa crude oil pipeline (EACOP), linking oil fields in western Uganda to Tanzania’s coast, as well as with Total’s liquefied natural gas (LNG) project in Mozambique. Standard Bank is an adviser to the Ugandan and Tanzanian governments on the Total pipeline and last year said it would lend $485m to the LNG project.

An environmental impact assessment determined that the Mozambique LNG project could increase the country’s greenhouse gas emissions by nearly 10%.

Meanwhile, accountability NGO BankTrack estimates that the oil conveyed via EACOP is likely to result in emissions of at least 33m tonnes each year – more than the combined emissions of Uganda and Tanzania. Indeed, 263 organisations, including the Global Catholic Climate Movement (GCCM) and the Kampala-based Africa Institute for Energy Governance, have called on banks not to fund the pipeline.

Dobson says Standard Bank recently received a consultancy’s environmental and social risk report on EACOP. She says the document will be given careful consideration if the bank considers funding the pipeline, but would not commit to publishing its findings.

But Standard Bank has also been active in clean energy. At the end of last year, it had R13.8bn ($1.02bn) of outstanding loans to renewables, as against R63.5bn to the fossil fuel industry, or 3.85 % of its loan book.

The bank has only just started to disclose these figures, so there is no historical data on whether, for instance, the fossil fuel exposure is falling or the renewables financing is rising.

Meanwhile, Standard Bank pledged at the late-May AGM to release, in the first half of next year, a roadmap for achieving carbon neutrality by 2050. This will include short, medium and long-term targets to reduce its exposure to fossil fuels.

In April, South Africa’s Nedbank went further, declaring its aim to have no such exposure by 2045. Dobson declines to say whether Standard Bank will match that promise.

“They’re proceeding very slowly,” says Ryan Brightwell, researcher and editor at BankTrack. “It’s welcome that the bank is expressing that it will develop a climate plan aligned with the Paris Agreement, but a lot of banks have already got their plans together for Paris alignment.” Brightwell does not expect Standard Bank to match Nedbank’s ambition.

Dobson takes issue with the suggestion that Standard Bank is lagging. “People may say we’ve been slow but actually we’re pretty much in the middle [of the pack] if you look at global banks,” she says. “There are banks that are really ahead on this, like ING, but there are lots of banks that are just starting out.”

Dutch bank ING committed in 2015 not to finance any new coal power or mining projects, while 43 banks from 23 countries pledged this year to be carbon neutral by 2050.

There has been speculation that Standard Bank might be lagging on climate plans because of certain backers and also the make-up of its board.

According to data collated by DeSmog – independently verified by Capital Monitor – 14 of Standard Bank’s 18 directors have or have had direct or indirect ties to the fossil fuel industry. Most notably, five also sit on the boards of coal producer Exxaro Resources, miner Anglo American, and oil-and-gas giant Sasol.

Dobson rejects the idea that such ties bias the board in favour of fossil fuels: “It’s a bit of a red herring. We can’t, as a bank that banks across Africa, cut all ties in every possible way to the extractive industries.”

It’s welcome that Standard Bank will develop a climate plan aligned with the Paris Agreement, but a lot of banks have already got their plans together for Paris alignment. Ryan Brightwell, BankTrack

In any case, she adds, it would be difficult to find competent directors in a carbon-heavy economy like South Africa with no such connections.

A further bone of contention is the influence of Standard Bank’s largest shareholder, Industrial and Commercial Bank of China (ICBC), which has a 20% stake and two board representatives.

Dobson defends ICBC’s climate awareness, but the Beijing-based institution is among the top 20 financiers of fossil fuels globally, leading some to fear that it may be slowing Standard Bank’s transition to sustainability. ICBC did not respond to a request for comment.

Coal cut but not dropped

Standard Bank says it has not financed any new coal-fired power stations – which are particularly damaging to air quality – since 2009. Yet the bank has considered funding such projects in that time, though it backed down after attracting public criticism.

Such was the case with Kenya’s Lamu plant, which was projected to increase the country’s national carbon dioxide emissions by 6-10%. Standard Bank said it would not support the project in 2017 and decided against similar plans for South Africa’s Thabametsi and Khanyisa plants in 2019.

However, its fossil fuel financing policy, published in December, does not exclude coal-related investments. “This is despite the fact that new coal-fired stations are not required for energy security and have severely negative impacts on human health and other human rights, the climate and the environment,” says Davies.

Asked why Standard Bank is not exiting the coal power market, Dobson says: “It’s not helpful to make those kinds of commitments because they don’t reflect the reality of what we need to achieve on the continent to deliver growth and sustainable development. While there is an overall transition to a lower-carbon economy, that’s going to move at different rates in different countries.”

In the meantime, campaigners are keeping up the pressure directly, using various routes.

Ilham Rawoot of Friends of the Earth Mozambique repeatedly asked Tshabalala during the AGM to meet her to discuss the impact of the Mozambique LNG development on the environment and local communities. The CEO declined to do so at the time but has since emailed Rawoot to arrange a meeting.

And, interestingly, GCCM says it is trying to determine whether – and where – Tshabalala goes to church. The intention is to identify his parish priest to prompt a conversation between the two on the Vatican’s call for Roman Catholics to divest from fossil fuels.

Climate campaigners – and perhaps also ESG-focused investors – elsewhere might well wonder whether a signal from on high would help advance their cause.

Olivier Holmey is a freelance journalist living in London. He is formerly Euromoney's chief correspondent for Middle East and Africa.
Websites in our network