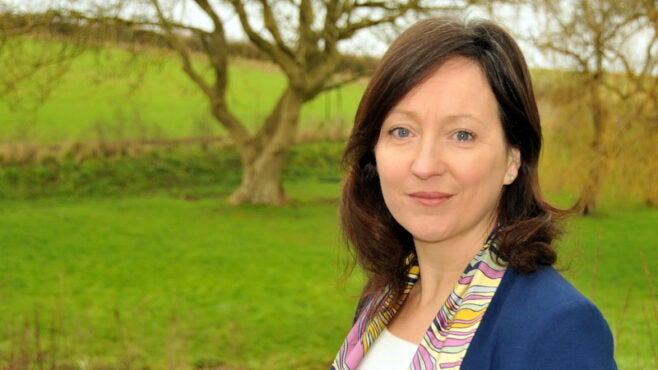 Abbie Llewellyn-Waters of Jupiter Asset Management says there are nearly 2,000 commitments to science-based targets for climate change but fewer than 100 targets for nature. (Photo courtesy of Jupiter)

“Our challenge is that nature is about six years behind climate,” David Craig, co-chair of the Taskforce on Nature-related Financial Disclosures (TNFD), tells Capital Monitor.

Formally launched in June last year, the TNFD aims to achieve for biodiversity what the Taskforce on Climate-related Financial Disclosures (TCFD) has been doing for climate since its establishment in 2015: providing a framework for organisations to report and act on their evolving nature-related risk.

Yet doing so for biodiversity poses particular hurdles, something investors and banks are increasingly alert to as this relatively poorly understood and funded area – covered by UN Sustainable Development Goal 15: Life on Land – attracts more attention.

Whereas greenhouse gases have standardised reporting methodologies and a single measurement unit (tonnes of CO2 equivalent), “biodiversity is often significantly more complex and requires on-the-ground assessments and tailored metrics to track impacts,” says Martin Berg, head of natural capital impact strategy at Climate Asset Management in London, which is one of a growing number of specialists on nature-related investment strategies.

Remote sensing is becoming increasingly viable for certain aspects of biodiversity, such as habitat area increases, Berg tells Capital Monitor. But “it will only ever serve as a proxy for actual biodiversity risks and impacts”.

Better data collection and analysis is needed to accelerate integration of natural capital and biodiversity into financing decisions, experts argue. As it stands, data gaps are seen to be creating an alarming disconnect between companies’ commitments to greater diversity and what they are able to deliver. Another concern is over policy lagging behind in this area and how it is hindering the implementation and enforcement of diversity pledges.

There is still a wide gulf between corporate disclosure on climate and nature, says Abbie Llewellyn-Waters, London-based manager of Jupiter Asset Management’s Global Sustainable Equities Fund. “There are close to 2,000 commitments to the science-based targets for climate change initiatives,” she tells Capital Monitor. “In the case of the targets for nature, there are fewer than 100. So we’re still at a nascent stage of the biodiversity data journey.”

On a more positive note, there is increasing recognition of the inextricable link between climate change and nature loss, and a growing number of tools to help analyse and compare the increasingly deep and diverse range of data sets tracking biodiversity degradation.

A series of policy and industry initiatives could help turbocharge this process over the next 12 months. “We believe 2022 will be an inflection point for greater transparency, with a number of frameworks coming to the market, which will enable us to think about biodiversity on a harmonised basis,” says Llewellyn-Waters.

The most notable is arguably the first TNFD framework, slated to launch in the first quarter of this year. It will probably generate opposition from people in the nature community arguing it does not go far enough and from bankers who believe it goes too far, says TNFD's Craig. But it will represent a significant staging post in the journey towards consensus on identifying, measuring, managing and reporting on nature-related risk, he adds.

This year will also be notable because it will be the first time that French financial institutions must provide detailed disclosure on their risks related to biodiversity – as well as those associated with climate change – for the previous financial year. Article 29 of the French Energy and Climate Law, published in May 2021 and live now, adopts the concept of ‘double materiality’, in that lenders and investors must disclose not only the impact of nature on their own institutions but also the impact of their activities on nature. 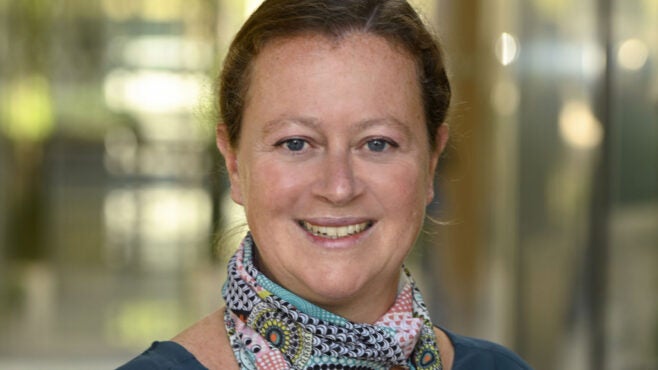 Karen Degouve, head of sustainable business development at Natixis, says France's new Article 29 is a good example of how regulation is helping to further transparency. (Photo courtesy of Natixis)

The new rule is a good example of how regulation is helping both to improve transparency and encourage innovation in data analysis, says Karen Degouve, head of sustainable business development at French bank Natixis. She cites several French impact assessment aids that she sees as having been galvanised at least in part by Article 29’s implementation. These include CDC Biodiversité’s Global Biodiversity Score, the Corporate Biodiversity Footprint indicator developed by fintech company Iceberg Data Lab, and the Carbon4 Finance Biodiversity Impact Analytics Database.

Such enhanced transparency seems well overdue, given the quantifiable importance of biodiversity to the world’s financial system. The World Economic Forum and consultancy PwC calculated in a January 2020 report that at least half of the world’s $88trn economic output is moderately or highly dependent on nature.

“Biodiversity loss could be the next frontier in financial risk management,” warned Moody’s ESG solutions group in a report published in July 2021. The rating agency cited this as one of five trends that its clients should keep an eye on.

Some 36% of investments by Dutch financial institutions – including pension funds, banks and insurers – totalling €510bn, is highly or very highly dependent upon at least one ‘ecosystem service’, found a study by the Dutch central bank in June 2020. That refers to a benefit provided to humans by the natural environment, such as pollination of crops, clean air or extreme weather mitigation.

If financial institutions were managing their risks properly, they would have a nature-linked indicator in their risk appetite framework. Karen Degouve, Natixis

The research calculated that domestic financial institutions have a worldwide “biodiversity footprint” equivalent to the loss of around 58,000km² of “pristine nature” – an area 1.7 times the size of the Netherlands. ‘Biodiversity footprint’ is defined by the central bank as “the loss of species and populations in ecosystems as compared with the pristine situation”. It is calculated from the footprint of companies in which the Dutch financial sector has an equity interest.

Meanwhile, French financial institutions’ portfolios equate to pristine nature covering the equivalent of 24% of the area of metropolitan France, according to a report in the French central bank’s September-October bulletin. Banque de France says its result is roughly comparable to that of its Dutch counterpart, after calculating on an adjusted basis.

But Natixis’s Degouve says she is mystified about how the French central bank came up with its numbers, given the gaps in corporate disclosure on biodiversity.

In any case, banks need to do more to make the quantity and quality of their biodiversity risk measurement comparable to their climate-related exposure, she argues. “If financial institutions were managing their risks properly, they would have a nature-linked indicator in their risk appetite framework. This would have a clear limit and would be measured on a quarterly basis.

“Banks don’t have this because their focus has been on reporting rather than measuring their nature-related risks,” adds Degouve. “But we shouldn’t pretend that because we can’t measure the risk, it doesn’t exist.”

Nonetheless, some banks have been engaging in initiatives aimed at improving transparency. Credit Suisse’s head of biodiversity, Oliver Withers, cites the example of the Aligned Accountability project, which is consolidating several non-government organisations’ nature-related databases into a single user interface. It is supported by banks such as BNP Paribas, Credit Suisse, HSBC and Santander, as well as several asset management companies.

While data in areas such as water efficiency and intensity has improved, in others – such as soil, flora and fauna – it remains nascent. Abbie Llewellyn-Waters, Jupiter Asset Management

Bankers say the quality of biodiversity data that corporates are providing is improving.

“When I have engaged with companies, I’ve been amazed at the quality of information many of them have included, which in some cases goes well beyond what they publish in their sustainability reports,” says Withers. The more progressive companies are keenly aware of the commercial advantages of identifying potential nature-related problems a decade or two before they materialise, he adds.

Yet there is a lot of progress to be made in corporate nature-based disclosure, according to research published in May last year by Moody’s ESG Solutions. The rating agency assessed the commitments made by 1,200 companies to protect biodiversity and scored them an average of just 32 out of 100. It said there was a “clear disconnect between most companies’ commitments and tangible measures disclosed to reduce their impact on biodiversity”.

The dearth of standardised data on biodiversity is clearly a key issue – and an indication of how far all market participants still need to travel on this journey, Llewellyn-Waters says.

“The way banks address the issue of biodiversity within their loan books really captures the complexity of the process,” she adds. “They have access to improved geospatial data, which gives them some element of enforcement to the wrongful deforestation covenants they have built into their loan and bond books. But the execution of enforcement from the geospatial data is currently challenging, not least because registration of land ownership has not been digitalised.”

More broadly, while data in areas such as water efficiency and intensity has improved, in others – such as soil, flora and fauna – it remains nascent, Llewellyn-Waters says. “Given global supply chains are still developing the detail that we require to give us sufficient measurability, engagement is a key tool we can use to integrate biodiversity into our investment decisions.”

Investors can and should play their part in encouraging more transparency by engaging with companies, agrees TNFD’s Craig. “If I were an investor now, wanting to get a view on where the world is heading over the next three years, I’d be asking management teams to describe to me exactly where their natural asset dependencies are and what plans they have to mitigate them.”

More questions will certainly be asked, as funds dedicated to biodiversity are set to proliferate. By the end of this year at least 15 investment managers will have mobilised $10bn or more towards nature-related funds, according to figures published at the Cop26 summit in November by the newly established Natural Capital Investment Alliance. Last month, for instance, Swiss company UBP Asset Management launched a biodiversity restoration strategy.

It is early days for assessing the financial impact of biodiversity, but momentum is building. Some feel it could accelerate faster if investors and lenders were to ramp up their activity in this area and give up on what could be a very long wait for nature-related data to be standardised globally – if it happens at all.

Phil Moore has been a writer for more than 30 years for various publications, including Euromoney, Euroweek, Risk, Institutional Investor, HedgeFund Intelligence and The Wall Street Journal.
Websites in our network