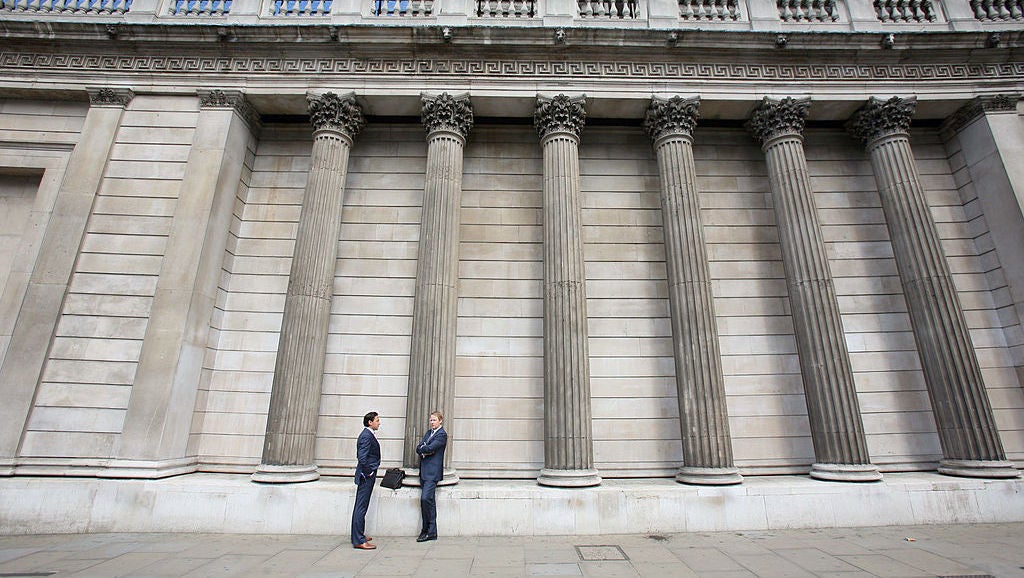 Talking point: Two executives outside the Bank of England, which is trying to assess the level of climate risk in banks’ loan books. (Photo by Paul Hackett/Bloomberg via Getty Images)

Climate change is a major source of systemic risk for banks. Rising incidences of flash flooding and wildfires across Europe this year is leading to a growing number of lenders with investments concentrated in sectors and regions highly exposed to climate risk.

A troubling picture is emerging. Rating agency Moody’s recently warned that loan losses could be 20% higher under the most extreme climate scenario than in a Paris Agreement-aligned scenario. This followed a 11 July speech by Christine Lagarde, in which the European Central Bank (ECB) president said that, without further climate policies, the most vulnerable 10% of banks may see a 30% increase in the average probability of default of their credit portfolios between now and 2050.

Accordingly, climate-related regulatory scrutiny of lenders is on the rise.

Despite making net-zero commitments and pledges to extend billions of dollars in climate-related finance, many banks are underestimating the impact of climate change, Sarah Breeden, executive director for financial stability strategy and risk at the Bank of England (BoE), said in May.

Our scenario exercise is a really tough ask, and bankers may not have all the data required. But given the urgency of the climate crisis, they must work with what they have. Sarah Breeden, Bank of England

And in the last week the Mark Carney-led Glasgow Financial Alliance for Net Zero (GFanz) initiative called on financial leaders to take more climate action. The group, which represents $90trn in assets, called on governments to set economy-wide net-zero targets for 2050 or earlier. It also called for all public and private enterprises, including financial institutions and SMEs, to release by 2024 risk management disclosures aligned to the Task Force on Climate-related Financial Disclosures (TCFD) and net-zero transition plans.

Moreover, earlier this month 85 members of parliament in the UK called on the central bank to use its green mandate to take a harder line on banks. In an open letter, the MPs said British lenders were falling short of climate pledges, with the five biggest pouring £227bn ($308.7bn) into fossil fuels between 2016 and 2020. They urged the BoE to take measures, including adjusting its lending scheme to provide cheaper credit to commercial banks that expand their lending for sustainable projects, particularly to SMEs.

All this comes as central banks such as the BoE and ECB are undertaking climate-related stress tests. These will determine how banks are integrating physical and transition risks into their risk frameworks.

Last month the ECB published the findings of its first economy-wide climate stress test. A precursor to next year’s financial sector climate stress test, which will be undertaken by the ECB’s supervisory arm, the analysis covered 1,600 banks in the euro area and four million companies worldwide. It examined the impact of climate change under an orderly transition, a disorderly transition and a hothouse world and offers what ECB vice president Luis de Guindos says is the most “comprehensive set of climate and financial data at a central bank” (see chart below).

Such tests will not be simple undertakings for any of those involved. Banks are already baulking at the challenge.

The core problem is that banks have insufficient data, says Brendon Moran, head of energy, natural resources and utilities at Société Générale. “Lack of data is probably one of the biggest inhibiting factors in everyone being able to price or zero in on a comparable and consistent view around how to measure climate financial risk.”

This argument does not hold up for some financial and investment experts, who point out that capital market participants have long invested and lent money with imperfect data.

Still, the amount of information being requested from banks is unprecedented. The scenario analysis requires 30 years of financial forecasting and there are high costs associated with multiple stress tests, following the European Banking Authority’s more general EU-wide stress test to take place in 2023.

There is a risk that all this could reduce the exercise to box-ticking, say bankers and other commentators. A 30-year planning horizon is “well beyond the long-term strategic planning appetite and capabilities of most banks”, writes independent analyst Sam Theodore in his commentary on the results.

Banks also question the reliability of any such data provided and the extent to which it should be used to set policy and guidance.

“You can’t project for a very long period of time because circumstances change on the climate front,” the European chief executive of a global bank tells Capital Monitor. “If you as a bank are requested in a climate change scenario to make a prediction for ten, 15, 20 years, you tell me how reliable that is.”

What’s more, the rising cost of compliance and the potential for additional capital burdens will likely mean some banks are unable to comply, the CEO adds. He cites the overlaying of climate stress tests with other stress tests and other documents that must be provided every year, objecting to the amount of time involved in what he calls a “horrendous” amount of regulatory requirements.

Likewise, central banks are starting to feel the pain of their ESG-related work. In June, the Swedish Financial Supervisory Authority said the EU’s new climate rules would place an unreasonable burden on them.

Other watchdogs admit to lacking the data they need. “The reality is that we don’t have the models to understand, as well as we’d like to, the impact not just of climate change, but of the transition to net zero,” Gabriel Makhlouf, governor of the Central Bank of Ireland, told attendees at a conference hosted by the Official Monetary and Financial Institutions Forum on 29 September.

We don’t have the models to understand, as well as we’d like to, the impact not just of climate change, but of the transition to net zero. Gabriel Makhlouf, Central Bank of Ireland

Regulatory bodies do not actually have the capacity to conduct the necessary analysis, agrees Caroline Haas, head of climate and ESG capital markets at NatWest Markets, the British bank’s investment banking division.

“This is incredibly granular, detailed work,” she adds. “The Swedish regulator has already said [it does not] actually have the manpower to do this. I think we’re seeing the first signs that, as much as everybody wants to do it, we need to be cognisant that it is very detailed.”

Certainly, Breeden recognises that the BoE’s scenario exercise is a “really tough ask” and that bankers may not have all the data required. The central bank is undertaking its Climate Biennial Exploratory Scenario and expects to publish the results in May 2022. But given the urgency of the climate crisis, she adds, banks must work with what they have.

“We do have a code red for humanity, and it is important for us to be considering our next steps,” Breeden said last week when asked about how the BoE might move from risk assessment to risk mitigation.

The big question for banks will be whether the stress tests lead to specific regulatory action. The purpose of prudential requirements is to safeguard financial stability and protect banks in crisis situations by obliging them to hold reserves against different risks.

So far, central banks have issued no guidance about the likelihood of additional capital requirements. BoE deputy governor Sam Woods even said in June that there was no evidence to force banks to hold more capital to cover risks from climate change.

Yet some bankers believe that once the appropriate data is collected and standardised, prudential measures will be the natural next step.

If there is a change to regulations or capital requirements, “and we probably do think it will happen at some point, it's got to be based off a really rigorous assessment”, says Robert Begbie, CEO of NatWest Markets. “Because otherwise you can end up with unintended consequences if you've got this wrong.”

In March 2020, a report compiled by the Institute for Climate Economics, a non-profit organisation, proposed a ‘green supporting factor’ (GSF), a ‘brown penalising factor’ (BPF), the combination of a GSF and a BPF, an environment risk-weighted asset and a green weighting factor.

But NatWest’s Haas warns against giving capital relief to green assets, saying: “What we don’t want to create is a green asset bubble. In many ways green assets are already favoured.”

There are some who feel appropriate internal risk modelling should already reflect ESG-related risks. For instance, Andrew Bowley, wholesale governance officer at Japanese bank Nomura, believes ESG risk should be reflected in credit risk as it stands today.

“We probably don’t expect too much [in the way of] prudential add-ons or adjustments in this space,” he says. “It’s very hard to separate out an ESG risk versus the credit risk of an organisation. The bottom line is that if you are holding assets that have a high stranded-asset risk, then by definition they are a high credit risk to you.” 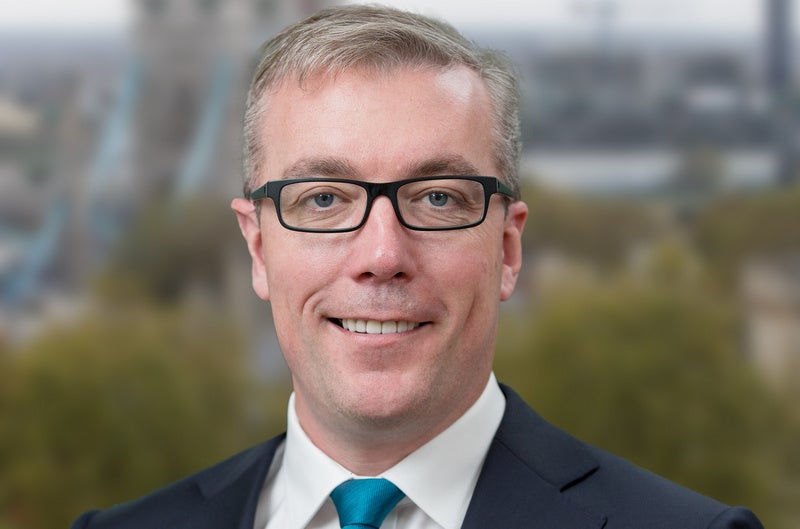 Brendon Moran of Société Générale says additional capital requirements or focus on risk-weighted assets may not be the way to tackle climate risk to loan books. (Photo courtesy of Societe Generale)

While the question of prudential measures is the “obvious one from a regulatory standpoint”, says Société Générale’s Moran, additional capital requirements or focus on risk-weighted assets may not be the way to go.

A renewable energy project and a fossil fuel-based project may present the same default risk, he says. “Capital requirements are put in place to reflect risk. How do you come up with the mechanisms that decide that, despite those risks of loss being similar, one should get a better or worse capital treatment?”

One approach might be to set a higher required return for brown projects than for green ones, Moran suggests. “That way you’re incentivising origination in a particular direction.”

Banks would like to see a “policy nudge” that will “set the guardrails” for them to construct a risk architecture and operational risk systems while incorporating climate risk, transition risk and physical risks, he says.

Similarly, Dutch bank ING argues in its latest climate report, released last month, that medium and long-term climate scenario analysis is an informative tool but is "not appropriate to inform capital requirements as it would not apply to today’s balance sheets". "We recommended that scenario-based climate risk measurement exercises are conducted on a voluntary basis at more granular portfolio levels, given their informative added value," it added.

Ultimately, the banking sector is gravitating towards addressing its own cost of capital and adapting internal risk-weighting tools accordingly. Some are starting to re-assess projects and the hurdle rate they require through a climate lens. Many are now turning down projects that do not fit with their broader climate strategies, with Deutsche Bank one example.

How all this will play out is “impossible to say at this stage”, Breeden says, given the uncertainty around the data and outcomes of the tests.

Investors allocate capital and banks provide lending on the basis of best estimates all the time, says Kuhn, who was formerly a credit fund manager. Why should it be any different for climate-related activity, he asks, especially at a time of such crisis?

“When your house is on fire, you don’t wait for conditions to be perfect to put it out,” Kuhn says. “You just put it out.”

Banks argue they lack the know-how to tackle the blaze; their supervisors say that banks should nonetheless be trying harder to control it. The face-off may persist for some time.