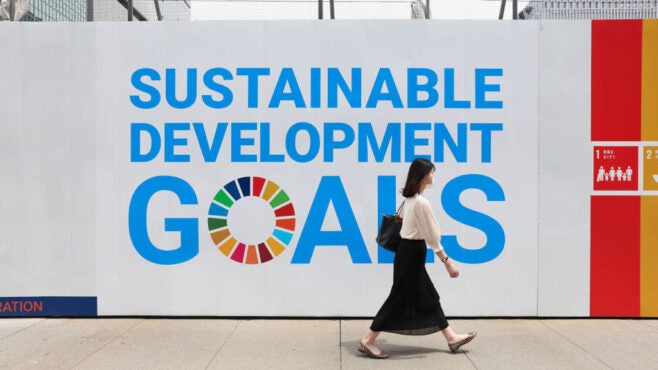 Going through the paces: banks are reporting on SDGs far more frequently (Photo by Stanislav Kogiku/SOPA Images/LightRocket via Getty Images)

Regardless of whether one thinks the 17 UN Sustainable Development Goals (SDGs) are fit for purpose or not, banks are increasingly reporting on their alignment to them.

A Capital Monitor assessment of the company filings for the top 30 largest banks by asset size over the past six years found that references to the SDGs in both annual and ESG/sustainability reports, and other related filings, increased from 62 in 2016 to 825 in 2021, a 12-fold increase.

With trillions of dollars of capital required to achieve the aims of the SDGs, Capital Monitor wanted to examine the link between increased SDG reporting and real-world impact. So, with support from sister company GlobalData, we searched for specific SDG phrases, such as ‘sustainable cities and communities’ (SDG 11), to see how frequently they appear in public reports.

As the data shows (see chart below), ‘climate action’ (SDG 13) and ‘gender equality’ (SDG 5) were the most popular phrases, making up more than half of all SDG-related mentions.

Part of the reason for this is that most of the phrases, especially the more specific ones such as ‘industry, innovation and infrastructure’ (SDG 9), were only mentioned with particular reference to SDGs, while ‘climate action’ and ‘gender equality’ were used in wider contexts.

The data also shows that banks are taking SDGs more seriously as each year passes. In 2016 there were just two mentions of sustainable cities and communities across all reports; by 2021 there were 95. Citigroup, for example, mentioned it four times in 2021 across its annual and ESG reports and, in one instance, showed alignment to SDG 11 through its financing of projects in “low-income urban areas”.

Closer analysis of the 2020* annual ESG filings of the top 30 banks revealed all bar two institutions – the Postal Savings Bank of China and Shanghai Pudong Development Bank – referenced SDGs in some capacity. Neither bank could not be reached for comment.

Twenty-four banks referenced at least one SDG in their 2020 reports. The remaining four – Bank of America, Goldman Sachs, Industrial and Commercial Bank of China, and HSBC – made broad references but did not list any specific SDGs. Spokespeople at Bank of America and Goldman Sachs pointed Capital Monitor to areas of their websites where more information on SDGs could be found. Bank of America, for example, says it it focused on advancing the SDGs and supporting the World Economic Forum’s key pillars across its $1.5trn sustainable finance portfolio.

HSBC and Industrial and Commercial Bank of China did not reply to our request for similar information before the deadline.

Where banks did specify which SDGs they address, some attached a number of goals to one target, whereas others were more detailed, and have specific sections of their report dedicated to their activities on one particular SDG.

An example of the latter is Royal Bank of Canada, which states its impact areas by SDG on page 79 of its ESG report, with an accompanying initiative and a measurement metric. For instance, for quality education (SDG 4) the bank cites its educational programme, RBC Future Launch, as an initiative, and the metrics, such as the number of young people reached through the scheme, the diversity of these students, and the amount in total donations invested in financial literacy programmes (CA$5m).

It is well-known banks are disclosing their alignment to the SDGs within their own operations, but fewer have opted to align it to their overall balance sheet. Just 8% of banks have set targets for their entire portfolio, commonly related to lending activities, whereas 43% indicate they have not defined SDG-oriented targets for their portfolio activities, according to a June 2021 survey of 66 banks by the European Banking Federation (EBF) and KPMG Spain.

A 2019 PwC analysis found a similar pattern within the broader corporate sector. Analysing the annual reports of 1,141 global companies, it found that while almost three-quarters (72%) mentioned the SDGs in their annual and sustainability reports in general terms, only 65% mentioned specific goals, while just 14% mentioned specific targets attached to the goals.

An initiative that attempts to standardise SDG reporting, while guiding banks through setting targets that align their businesses with the SDGs, is the UN Environment Programme Finance Initiative’s (UNEP FI) Principles for Responsible Banking (PRB).

Under the PRB, banks must set targets that align their portfolios with the SDGs, with an initial four-year period within which to implement the principles. The initiative currently has 275 signatory banks with approximately $72trn of combined assets.

“The target needs to be smart. It needs to be supported by milestones and KPIs [key performance indicators],” says Puleng Ndjwili-Potele, interim banking lead at the PRB.

A 2021 PRB report highlights the progress made so far in relation to the goals: 94% of signatories have identified sustainability as a strategic priority, whereas just 30% are already setting targets.

Crucially, the principles recognise the relationship between SDGs, meaning tagging multiple SDGs to one target is acceptable. For example, if a bank sets a climate mitigation net-zero goal, it is contributing to affordable and clean energy (SDG 7), life below water (SDG 14), life on land (SDG 15), climate action, partnerships for the goals (SDG 17), and good health and well-being (SDG 3).

SDGs: A lack of consistency

Ndjwili-Potele notes that SDG reporting varies widely between the goals. SDG 13: Climate Action, for example, has many tools and metrics accompanying it, as well as established targets at an international level, meaning “it’s much easier to align to”, says Ndjwili-Potele.

New frameworks to support banks in aligning to SDGs are popping up, however. The upcoming Global Biodiversity Framework, for example, is designed to help benchmark progress against SDG 15: Life on Land, where data is currently lacking.

Availability of data is not the only factor that determines which goals are prioritised by banks: their relevance is also down to how closely tied they are to a bank’s core strategy.

“Banks… can influence a broader range of outcomes in the economy and society through their financing activities than their actual physical footprint,” saysBurçak Inel, director of financing growth at the EBF.

That’s why the most popular goal is SDG 8: Decent Work and Economic Growth, with 83% of bankers selecting it as among the most relevant in the EBF/KPMG Spain survey, followed by SDG 13: Climate Action, chosen by 75% of respondents, and SDG 7: Affordable and Clean Energy with 60%.

Capital Monitor drew from three sources to establish a ranking of which SDGs are currently prioritised by banks: GlobalData and the sustainability index established by media platform Impakter – both measuring how frequently an SDG number is mentioned in ESG and annual reports – as well as the EBF survey.

There was some consistency across which are most or least valued: in all three sources, SDG 8: Decent Work and Economic Growth was in either first or second place, while Climate Action ranked relatively high. On the other hand, SDG 14: Life Below Water, SDG 15: Life on Land, and SDG 2: Zero Hunger, all ranked near the bottom.

However, no mention of an SDG does not mean that banks are neglecting them. HSBC, for example, may not refer to any SDGs within the reports we reviewed, but based on Capital Monitor’s CEO compensation report published last year, we know it rewards its CEO with a bonus for achieving the target of having at least 30% women holding senior leadership positions.

​​In this sense there is a limit to what you can conclude by focusing on which SDGs receive more attention on paper. It is, however, a helpful indicator of where capital is being applied.

*The majority of the latest bank filings were dated 2020.