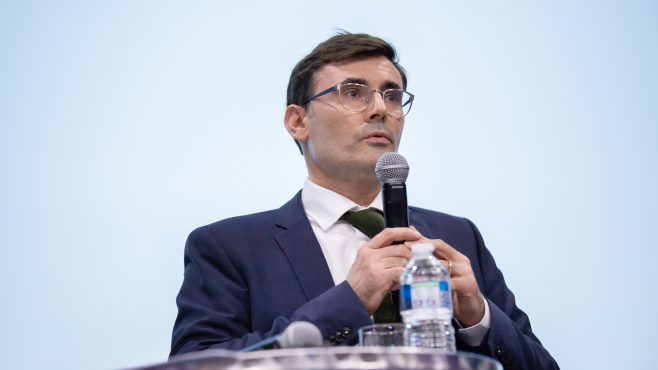 When a host of influential central bankers met at the One Planet Summit in Paris in 2017, they were frustrated. Despite hearing plenty about the risks of climate change – two years earlier 196 governments had signed the landmark Paris Agreement, committing to limit global warming to 2°C or lower by 2050 – they knew many in the exclusive peer group didn’t consider it their problem.

The Basel Committee, the self-proclaimed primary global standard-setter for banks’ prudential regulation, was struggling to make progress on conversations about climate change. This was largely down to the influence of the Trump administration, which was actively hostile towards climate initiatives from the get-go, but representatives from other countries weren’t particularly enthusiastic either. The Financial Stability Board (FSB), at the time chaired by now climate change aficionado Mark Carney, similarly struggled.

A small set of central bankers saw the opportunity to make a difference and the Network for Greening the Financial System (NGFS) was born. And although the NGFS is not a legal entity, a standard-setting body, or a regulator in any way, its membership stands at 90, including all the major economies, with 13 observers. Its collective clout over policy is setting up to be instrumental in the drive to curb global warming.

What the NGFS does

“We simply agreed on a charter and published it on our website, and said if you want to join us, these are the rules of the club,” says Morgan Després, the Banque de France official who heads up the organisation’s secretariat.

While the NGFS’s 13 observers include the IMF, International Organization of Securities Commissions, and the Basel Committee, all of its core members are central banks or supervisors, which Després says was an active decision to set the network apart from other industry initiatives.

“Three years ago, central banks and supervisors were saying that climate change isn’t in their mandate, so why should they care? So, we had to frame our initiative in a way that made it impossible for them not to care,” says Després.

“Everyone in the supervisory community has a financial stability mandate, so we put it back to them and said, if you’re not worrying about the risks posed by climate change then you’re not fulfilling your mandate. And that ended up being quite powerful.”

The NGFS is not the first group to make these recommendations, so success in this area is hard to measure. But the report was helpful in resetting the priorities of central banks and ensuring they were thinking about climate-related risks.

Most recently, in March 2021 the NGFS published a report identifying nine ways in which central banks could use monetary policy to tackle climate change risks, including positive tilting for green corporate asset purchases, or negative screening for ‘brown’ activities.

The NGFS’s biggest success to date has been its climate stress tests. The network unveiled the first-ever climate-related scenarios in June 2020. French banks have already undergone them, and UK banks are up next. Banks in the eurozone, Australia, Brazil, Canada, Hong Kong and Singapore will all follow over the next two years.

The goal is to establish how bank balance sheets and capital levels stand up to two sets of risks: the physical risk of severe weather events like flooding, subsidence, droughts and fires; and transition risks, such as policy changes to encourage the shift towards net-zero emissions.

Initially, we thought we could collect the data that already exists and synthesise it, but then we quickly realised otherwise.

The work wasn’t easy. No one before had run a range of climate scenarios looking at the physical and transition risks over the next 30 years. The network got to work with climate scientists, physicists, economists and investors to create reference scenarios for national central banks to adopt. “Initially, we thought we could collect the data that already exists and synthesise it, but then we quickly realised otherwise,” says Després.

Stress tests are important because they’re forward-looking, but most agree that they are far from perfect. “We know they don’t solve all of everyone’s problems and that we still have work to do, but part of that can only be done once they have been tested and we can compare different countries’ outcomes,” Després says. “The important thing is that we’re all starting from a broadly consistent, comparable place.”

This approach still allows for some country-by-country differences: for Hong Kong to consider the impact of typhoons, for instance.

That’s one reason why the NGFS’s proposals have been clear that the tests should not necessarily be used to set banks’ capital buffers. “There’s a lot of debate on this, with some saying that we shouldn’t move to policy action without certainty about the impact, while others argue that if you wait for that certainty, entire countries would already be underwater,” says Després.

Are capital buffers next?

Després doesn’t expect many supervisors to use climate stress tests to set capital buffers for at least two years, but thinks it will probably be later than that. This could have a material impact on the cost of capital for ‘dirty’ companies, so central banks are treading carefully.

Després hopes that the first round of stress tests will produce the clearest picture of climate risk in the financial system to date. This is likely. He also hopes that lessons can be learned about how banks can and should allocate their portfolios to the climate risk facing them. That is not happening right now, he believes, because it’s impossible to measure the risk in the first place, let alone compare between institutions or jurisdictions.

The single most important variable within the scenarios is the highly contentious topic of the price of carbon, where little real-world policy progress has been made. Després believes this is a prerequisite to reducing emissions in line with the Paris Agreement, but one that is, of course, far from the remit of central bankers.

The world looks different now from when those central bankers met in Paris in 2017. The way politicians, the public and everyone in between talk about climate change has shifted. The notably absent US Federal Reserve joined the NGFS in late 2020, and the FSB and Basel Committee have since found it easier to focus on climate-related work.

In future the network could expand its remit and look at a broader range of environmental issues if there is appetite for it. “This is a concern particularly for our members from emerging countries, and it won’t be easy, but I think it’s something we have to do,” says Després.

“There’s definitely a new international mood, but we’re still here and we still have a role to play,” he adds. “I’m proud of the work we have already done and believe it was a public service. It makes sense for us to continue this work for as long as we’re adding value.”