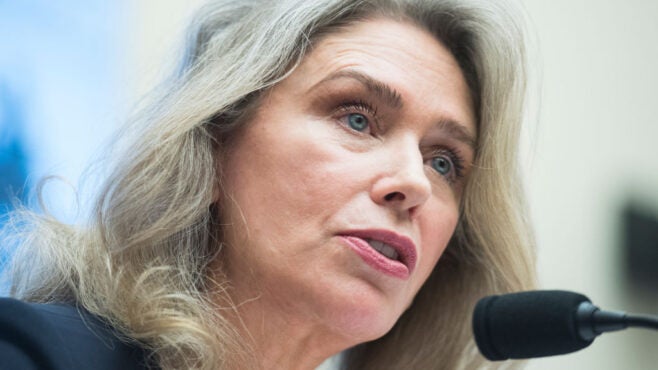 The SEC’s Allison Herren Lee says environmental regulation must be a combined effort of agencies across the US and the world. (Photo by Tom William/CQ-Roll Call, Inc via Getty Images)

It is something of an understatement to say that climate change was not a priority of Donald Trump during his turbulent presidency.

Last week, his successor Joe Biden apologised to world leaders at the Cop26 climate summit for the US’s 2016 withdrawal from the Paris Agreement, which he immediately reversed following his inauguration in January. Granted, Biden did not make a new Paris-related commitment while in Glasgow, and the jury is still out on the US’s contribution to the summit. Nonetheless Washington’s four-year absence from the climate talks had been keenly felt.

Still, at least one Trump administration decision has had a positive impact on the fight against climate change in the US: the July 2019 appointment of Democrat Allison Herren Lee as the fifth commissioner of the Securities and Exchange Commission (SEC).

In January this year, she was designated acting chair by Biden. While long-time regulator Gary Gensler has now taken the post, during her three-month spell in charge Lee made several key statements that could change the US securities markets forever.

Investors have long insisted that they need this information, and US regulators are some way behind other jurisdictions in requiring it. Some of the largest North American pension schemes, among other leading asset owners, have voiced their support for mandatory climate reporting alongside calls for stability on environmental policy in general.

One of the issues that has bothered me lately is the vast amount of capital in the US private markets that public company disclosure rules don’t reach, for the most part. Allison Herren Lee, US Securities and Exchange Commission

Lee tells Capital Monitor that climate risk has been a priority since the start of her tenure as a commissioner. In a statement with then commissioner Robert Jackson, she flagged the absence of any discussion of climate risk in the SEC’s proposed rule update on Regulation S-K – which lays out reporting requirements for listed companies – and urged the public to weigh in on the issue. The watchdog ended up finalising that proposal in 2020 without a mention of climate – or any analysis of the thousands of public comments the agency received.

Lee took serious issue with this. “The aim was to build up a robust public record that could serve as the foundation for a potential rule proposal,” she tells Capital Monitor. “We’ve had thousands of responses to that request already.

“Chair Gensler has prioritised climate rule-making – it’s on the agenda – and he said publicly that he anticipates a proposal, hopefully by the end of the year,” she adds. “We’re finally moving in the right direction on this topic.”

Subsequent statements from both Lee and Gensler have made it clear that the aim of mandatory climate disclosures is to bring about greater clarity for investors in the US, in a way that is “decision-useful”.

The agency’s climate-related rule-making is unlikely to stop at enhanced disclosures. The SEC should be looking broadly at how climate and ESG intersect with its regulatory mission in many different areas, says Lee, including through asset managers and credit rating agencies.

“One of the issues that has bothered me lately is the vast amount of capital in the US private markets that public company disclosure rules don’t reach, for the most part,” she adds. The current landscape potentially creates incentives to move carbon-related assets and businesses into the private from the public sphere, Lee notes.

Her concerns are underlined by the rapid growth in unlisted investments. The volume of private market assets has nearly trebled in the past decade to $6.5trn, by data from Preqin (see chart below), and Morgan Stanley expects it to reach $13trn by 2025.

“We need to give serious consideration to the level of transparency in this large and growing segment of our equity markets and ask ourselves whether the boundaries – the balance between public and private – need re-examination," she adds. "It is an extremely important point for us to consider.”

Lee’s point will likely resonate with many, as concerns have been raised elsewhere about climate arbitrage, whereby oil and gas companies, under regulatory pressure, sell off their most carbon-heavy assets to private owners.

The SEC could take inspiration from others: the UK mandated reporting across the board in March this year, covering both public and private companies.

Introducing mandatory climate disclosures would make it harder for companies to provide false information about their ESG credentials to attract investors.

This is key because in the US there are few legal mechanisms to prevent greenwashing. While it is a well-documented problem in securities markets, the concept is not yet a recognised regulatory term in the SEC or any other US regulator’s lexicon.

Lee feels there are issues to be addressed around the marketing of products. “For instance, with investment funds, it needs to be determined whether the characterisations of investment strategies are accurate,” she says. “That's another space we have to be mindful of, and [where we need to] think about potential greenwashing.”

It needs to be determined whether the characterisations of investment strategies are accurate. That's another space [where we need to] think about potential greenwashing. Allison Herren Lee, SEC

In July, Gensler requested that SEC staff consider whether this sort of disclosure should be required in a company’s Form 10-K – its annual public disclosure report. However, there has been no indication of proposed enforcement nor about whether companies would be heavily penalised for non-compliance.

By way of example, the SEC is working with the Justice Department on a probe into DWS, after the German fund house’s former head of sustainability said its claims about its sustainability efforts were misleading.

The regulator has given little information around the investigation, which cites rules set in 2010. How the SEC will operate under its proposed new rules remains unclear. Lee declined to comment on both this and the DWS investigation.

But she does not foresee any issues with enforcement of the planned mandatory disclosure rules. “When it comes to climate and ESG, the SEC will do what it always does, which is look at and enforce the rules that are already on the books,” she says.

In any case, environmental regulation must be a combined effort of agencies across the US and the world, says Lee. “Cooperation is critical – the climate doesn't observe jurisdictional boundaries.”

Indeed there is now broad recognition that climate change poses a systemic risk to financial systems globally. In the US, for instance, there are domestic cooperation mechanisms, such as the Financial Stability Oversight Council. This was set up in 2010 under the Dodd-Frank Act, which brings financial watchdogs together to assess risks to the US financial system.

The SEC works with both agencies on areas including climate, Lee says, and “the FSB is doing some really great foundational work to better understand the systemic risks, although they are naturally a little bit more focused on the banking sector”.

Moreover, Iosco has a sustainable finance team that is working to help develop an international collective understanding of the global regulatory landscape and the experiences of various market participants.

“We are seeing a lot of really promising and productive collaboration among regulators, both domestically and internationally,” Lee adds. “It's exceedingly important.”

One can only hope Lee would be given the chance to continue to exert positive influence if the Democrats were to be ousted at the next presidential election.

John Crabb is managing editor of IFLR and Practice Insight at Euromoney Institutional Investor.
Websites in our network