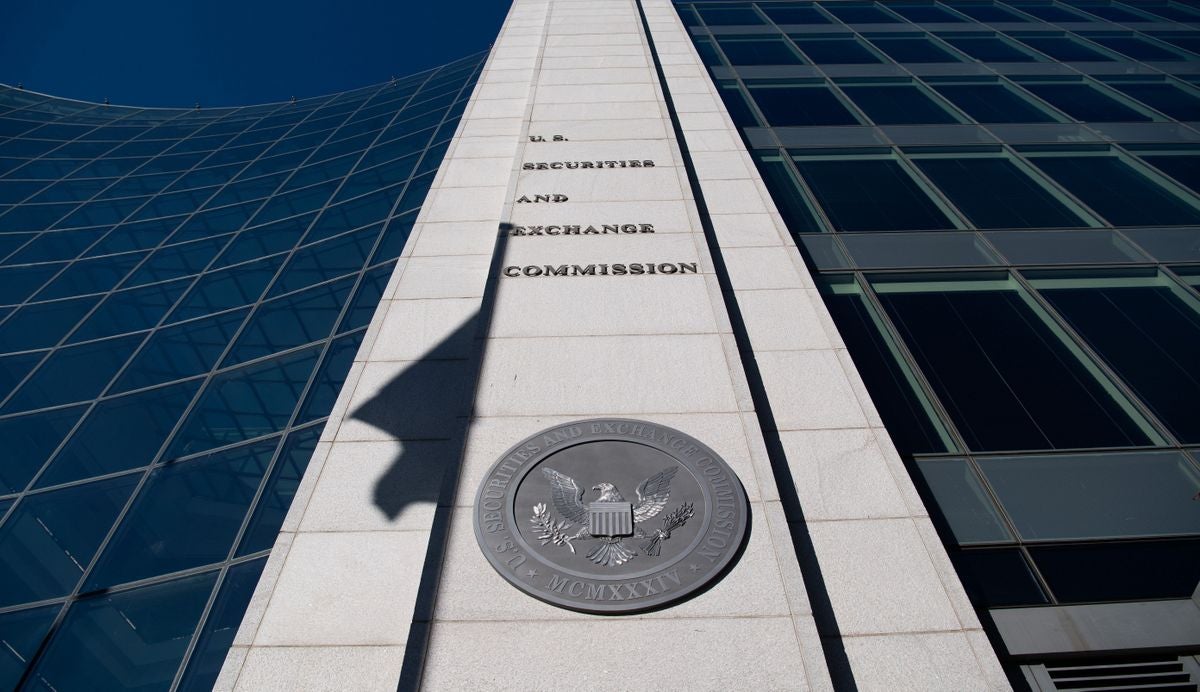 The US Securities and Exchange Commission has rattled the funds industry by announcing a probe into DWS. (Photo by Saul Loeb/AFP via Getty Images)

Asset managers might think twice about trumpeting their ESG credentials after the startling news that Germany’s DWS is being investigated for such claims. It is arguably the most high-profile sign yet that regulators are more closely scrutinising investment products labelled as green or sustainable.

The development is also notable as it underlines the entrance of the US Securities and Exchange Commission (SEC) into the fray. After four years of silence on anything climate-related during President Donald Trump’s tenure, the watchdog seems to have woken up and smelled the forest fires.

The first sign came in March, when SEC commissioner Allison Herren Lee made a request for comment in March on mandatory climate disclosures for businesses. But it was the late August announcement of a probe into DWS, the €859bn ($1.02trn) fund house majority-owned by Deutsche Bank, that really sent shockwaves through the investment industry. Both the SEC and German watchdog BaFin are looking into ESG claims made by the company.

Tip of the iceberg?

The wider fear is that the case is the opening salvo of a broader crackdown by the regulators – and that this is just the tip of the iceberg.

So many managers are making claims about ESG that “few funds will be safe”, says Jakob Thomä, Berlin-based managing director of think tank 2° Investing Initiative. A March 2020 report by his organisation found that at least 90% of environmental impact claims potentially violate regulatory guidance.

DWS itself fell foul of a comment in its 2020 annual report, published in March. It says more than half of the fund house’s assets are subject to ESG integration – that is, ESG issues are incorporated into their investment analysis and decisions.

But the former group sustainability officer, Desiree Fixler, claimed on 1 August that “only a small fraction of the investment platform applies ESG integration”. She had been fired from the company around the time of the report’s release, in spring 2021.

DWS’s stock price slumped 13.6% on 26 August, the day after the news was reported by the Wall Street Journal, and has not recovered, though the company disputes the claims.

Fixler is another example of a senior fund executive calling out their own firm for making misleading claims about ESG. Tariq Fancy stepped down as CIO of sustainable investing at BlackRock in September 2019 and has since repeatedly outlined what he sees as the dangerous fallacies of ESG investing.

Sources were generally reluctant to comment on the DWS investigation, with some citing that only limited information is available as yet.

That said, more such cases seem inevitable, says Peter Ryan-Kane, founder and head of Hong Kong-based investment consultancy PeRK Advisory. The concept of ESG is continuously evolving, as is the extent to which investment products are ‘sustainable’, he tells Capital Monitor. Moreover, end-investors and fund fiduciaries tend to be at the mercy of generally better-resourced fund managers and their marketing capabilities, says Ryan-Kane.

“Hence it’s no surprise to me that ‘ESG’ products will be subject to further due diligence, enquiries or investigations. Perhaps closer scrutiny might swing the pendulum back towards the fiduciary a little.”

Certainly it appears that the landscape is shifting.

Until the DWS news broke, there had been a perception of a “regulatory no-fly zone” surrounding environmental marketing claims for funds, says Thomä. There is a lot of regulatory uncertainty and lack of knowledge around sustainability generally, he adds. “Understanding of how these things work within financial services is improving, but it’s still very low.”

In the EU, environmental marketing claims are technically covered by the Unfair Commercial Practices Directive. Accusations of false or misleading financial products in the environmental context are generally rare because, in most cases, damage has to be proven.

“If you’re mis-sold a product and you lose money, it’s quite clear what’s gone wrong there,” adds Thomä. “It’s much harder to prove damages in [an environmental] case because financial performance may not be affected. It’s more of an environmental well-being issue, which is much more complicated.” 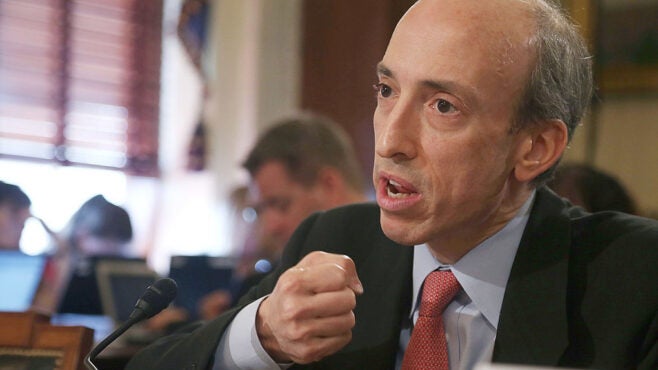 Gary Gensler, chairman of the SEC, says “investors should be able to drill down to see what’s under the hood” of ‘green’ or ‘sustainable’ funds. (Photo by Mark Wilson/Getty Images)

Financial services companies have generally not faced such cases, but the extraordinary proliferation of claims – often seemingly spurious – to ESG in recent years could change that.

For instance, funds marketed as ‘ESG’ often hold shares in major emitters, found a report published on 27 August by UK think tank InfluenceMap. Of the 593 ESG-labelled equity funds assessed, 421 – or 71% – received negative scores when assessed against Paris Agreement on climate change criteria. That was even the case for 55% of the 130 climate-themed funds reviewed. Most of the products surveyed were from the top global firms.

This is despite the International Energy Agency making clear in a widely cited report in May that if the world is to achieve net-zero emissions by 2050 there must be no new oil, gas or coal development undertaken.

InfluenceMap says its findings “highlight a lack of consistency and often poor transparency on the alignment of many ESG and climate-themed funds with global climate targets”.

Regulators are certainly taking note. The latest developments mark a considerable change in approach at the US securities regulator. SEC chair Gary Gensler said during a webinar on 28 July that “labels like ‘green’ or ‘sustainable’ say a lot to investors… investors should be able to drill down to see what’s under the hood of these funds”.

Speaking the day after news emerged of the DWS investigation, Gensler said the SEC was considering recommending that fund houses should disclose more information on the criteria and underlying data they use.

This kind of disclosure is key and the US will get clear ESG standards at some point, an Atlanta-based fund manager tells Capital Monitor on condition of anonymity. “If you’re using ESG integration or data, you should make it clear to your client how you’re using it – our industry is all about disclosure. That’s the simplest way to avoid accusations of greenwashing.”

The SEC is not alone in its concerns around greenwashing.

But questions have been raised about the EU’s attempt at tackling such practices – the Sustainable Finance Disclosure Regulation (SFDR). Some argue the law, which came into force in March, is inadvertently rubber-stamping greenwashing. For instance, 80% of all funds categorised as ‘sustainable’ under SFDR contain fossil fuel stocks, according to research house Morningstar.

Still, Morningstar data on SFDR products suggests that stricter criteria may be having an impact. While overall global sustainable fund assets have continued to grow, such products saw a sudden sharp fall in inflows in the second quarter of this year, and the number of fund launches fell considerably – at the time the SFDR was implemented in the EU (see graphs below).

Meanwhile, in the UK the Financial Conduct Authority wrote to asset managers about their obligations when positioning their funds as ESG, arguing that ESG integration alone is not enough.

This is a good example of regulators setting out their expectations and flagging that enforcement is likely to follow, says Alastair Sewell, London-based head of Europe, the Middle East, Africa and Asia-Pacific fund ratings at Fitch.

“ESG has been firmly in the realm of reputational risk so far, but the regulatory risk is clearly coming,” he adds. “There’s increasingly a burden of proof for investment managers [making claims of sustainability], who themselves are very concerned about accusations of greenwashing.”

Elsewhere, regulators in China, Hong Kong, Japan and Singapore have introduced requirements for clearer disclosures from ESG-labelled funds, or are considering doing so.

And stricter criteria around what makes an investment sustainable has led to a fall in the proportion of such assets as a share of overall investments in Europe and, more recently, Australia, according to research published in July by the Global Sustainable Investment Alliance.

The era of asset managers being able to claim sustainability without solid evidence seems to be on the wane – and not before time. The probe in DWS' ESG practices is just the beginning.