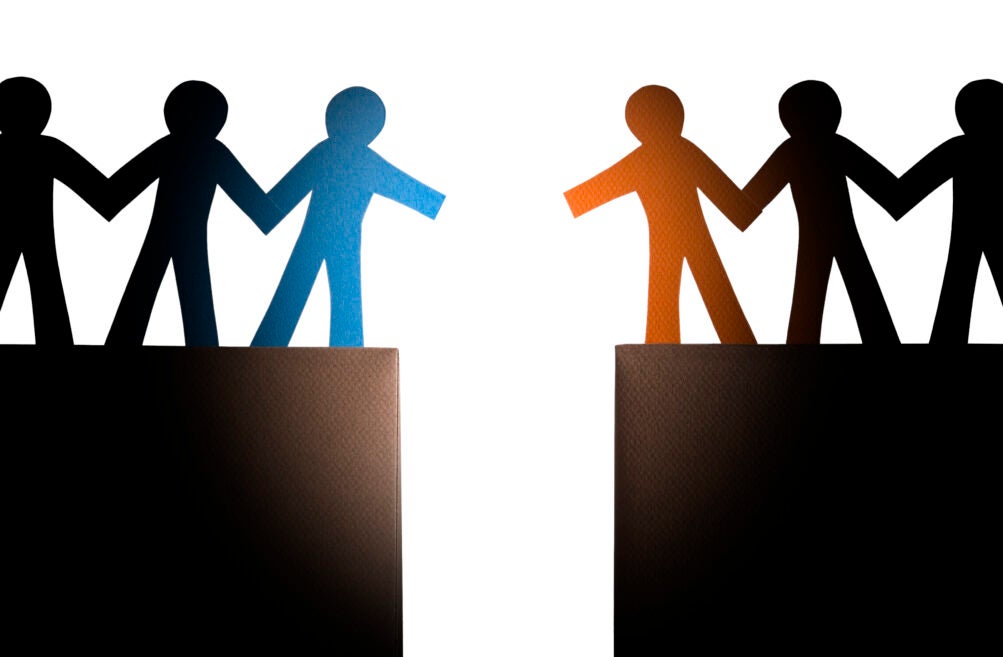 Bridging the policy gap: insurers are getting to grips with internal discrepencies on coal but less so on oil and gas.  (Photo by timsa via iStock)

Speaking at Cop26, the global coordinator of the Insure Our Future campaign unveiled the pressure group’s latest scorecard on insurance companies’ fossil fuel policies. Despite some positive developments, it was clear he was unimpressed.

“With their failure to move away from oil and gas, the insurance industry has given up their claim to climate leadership within the financial sector,” Peter Bosshard told the crowd.

His remarks are based on Insure Our Future’s November-published scorecard, which uses the same criteria as last year to assess policies, and ranks insurers for their policies on coal, oil and gas investment and underwriting.

Despite legitimate grievances around oil and gas, Capital Monitor’s analysis of the data from the report establishes that the gap between investment and underwriting has almost closed, with some insurers tightening up coal insurance policies to a standard that matches that of their investment portfolios.

With 35 insurers, up from 26 last year, it is safe to say coal is rapidly becoming uninsurable.

To provide context, a report published at the end of May by ShareAction, a non-government organisation that promotes responsible investment, found that insurers with a property and casualty business consistently had different underwriting policy standards compared to their investment arms. Digging into this in June, Capital Monitor identified a narrowing but tangible gap between the insurers’ investment and underwriting coal policies, the former of which tended to be more restrictive.

Hard on investment, hard on underwriting

A lot has changed in six months. Take Germany’s Allianz as an example. The insurer scored 4.5 out of ten on the Insure Our Future scorecard for coal investments, and just 3.04 for underwriting; this year it received 8.6 points for its coal insurance policy and 8.3 for divestment, reflecting the stricter standards it has subsequently put in place. As of May it has ceased to insure almost all new coal projects and now excludes coal infrastructure projects as well as coal mines and plants.

With 35 insurers, including those from Korea and Japan, now ending cover for coal, up from 26 last year, it is safe to say coal is rapidly becoming uninsurable.

Bosshard acknowledges it is now “very rare” to see insurers only taking action on investment but not underwriting, but notes French insurer Axa’s new oil and gas policy, announced just days before Cop26, is more restrictive on divestment than underwriting. This is in spite of the company's apparent historic emphasis on maintaining consistency across both the asset and liability businesses. In fact, when Capital Monitor spoke to Axa in July, the company confirmed that it strove for policy consistency across both.

Axa’s new policy excludes cover for new upstream oil greenfield exploration projects, as well as all new direct investments for all oil and gas companies. Its underwriting policy is less restrictive on a relative basis, as it has exemptions for companies with what it calls "credible" transition plans.

“They suddenly face an inconsistency, because, on the underwriting side, they’re lagging behind. It's just one company, but of course Axa is seen as a bit of a model for others to follow,” says Bosshard.

Insurers catching up on oil and gas

Axa is one of only three insurers, along with Generali and Suncorp, to exclude conventional oil and gas. However, since the publication of the International Energy Agency’s (IEA) landmark report – which warned that no new oil and gas financing can continue beyond the end of this year if the global economy is to remain in line with net zero – campaigners are pushing hard for insurers to play catch up in this sector.

However, Capital Monitor finds that the gap between insurers’ coal policies and their oil and gas policies has grown over the past year. This means insurers have tightened their coal policies at a faster rate than those around oil and gas.

Axis Capital provides a suitable example. Last year it produced relatively similar scores for coal and oil and gas. In October, it updated its fossil fuel policy, becoming the first North American insurer to commit to fully phasing out coal from its business. While it also extended its oil and gas policy to cover projects just within the Arctic refuge, Axis’s new coal policy is more expansive.

The charts above map insurers’ oil and gas policy scores compared with coal, illustrating the widening gap between sectoral policies. By Insure Our Future’s model, the higher the score, the more restrictive the policy.

While individual scores are not directly comparable between years, it is clear that coal policies have tightened at a faster rate in relative terms. For example, last year, insurers such as Munich Re and Axis Capital had similar scores for their coal and oil and gas policies, whereas this year their coal policies score much higher.

This highlights what the Insure Our Future report calls the "contradictory" way that insurers express their support for fossil fuels, where even the highest-scoring companies for coal underwriting score ‘poorly’ for oil and gas policies.

The biggest concern to campaigners are the official policies from insurers with the most exposure to the sector. This includes Allianz and Axa, which are thought to be among Europe’s largest underwriters of oil and gas expansion.

Data on underwriting is hard to come by, but a 2021 report from German environmental NGO Urgewald highlighted where European insurers are providing insurance to companies with gas expansion plans.

In March 2021, Allianz provided liability insurance for Energinet, for the Danish gas company's involvement in the Baltic Pipe Project. In October last year, Axa provided insurance for a gas pipeline under construction to deliver gas from Azerbaijan to Bulgaria. In June this year, Allianz provided damage or loss insurance for the Zeebrugge LNG terminal, which takes gas from the Arctic and has been criticised by campaigners as environmentally destructive.

Capital Monitor spoke to Lucia Silva, Generali’s group head of sustainability, about its own oil and gas policy. Based on Insure Our Future scores, the Italian company obtains the highest score for its oil and gas insurance policy (which, at just 1.9/10, is low) and is the only European insurer to have ended all cover for new oil and gas production.

Silva argues that establishing policies for underwriting is “easier” than for investments because assessing the impact of a particular asset is easier than assessing a company’s entire operations.

For investment policies Generali relies heavily on lists supplied by NGOs like Urgewald, which is a part of the Insure Our Future campaign and provides detailed information on companies’ expansion plans.

Silva says Generali “welcomes” Urgewald’s most recent Global Oil and Gas Exit List (Gogel) released on 4 November and cites a recent discussion with the NGO where Generali’s team pointed out that insurers need tools such as Gogel to make informed decisions.

Since the list has been published, Generali plans to embed its findings within its oil and gas investment policy, as it did with Urgewald’s Global Coal Exit list, which was first released in 2019.

The establishment of the Net-Zero Insurance Alliance shows “there's clearly a convergence from a sector perspective to come together in tackling the problem”, says Silva, and a desire to “share roadmaps on reaching net zero”.

As these tools and roadmaps start to be disseminated over the next few months, it is likely stronger policies will follow.