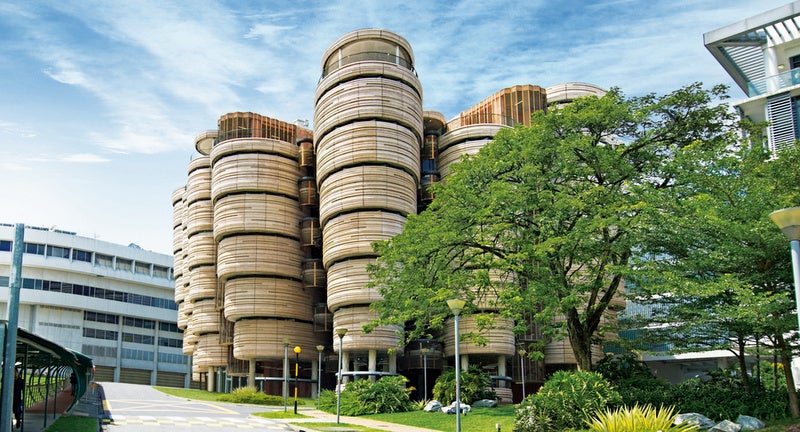 Nanyang Technological University: Innovative in both its buildings and debt structures. (Photo courtesy of NTU)

Universities have been surprisingly slow to tap green finance, but they are making up for lost time this year – not least with a deal that is a landmark for the higher education sector and only the second of its kind globally.

In mid-October, Singapore’s Nanyang Technological University (NTU) became the first of its peers worldwide to sell a rated sustainability-linked bond (SLB): a S$650m ($481.7m) 15-year issue priced at 2.185%. It was the third such transaction in the city-state. The institution has a triple-A rating from Moody’s, one of 22 universities globally, and one of just two outside the US, to do so.

The bond’s key performance indicators (KPIs) target halving the university’s gross CO2 emissions intensity by 2035 and achieving carbon neutrality. If it if fails to do so, the university will have to make a one-off 50 basis points (bp) payment on the outstanding aggregate principal.

But whereas that step-up payment would typically be paid to the investors, in this case the funds will be spent on research into climate change mitigation or on buying renewable energy certificates or certified carbon offsets. 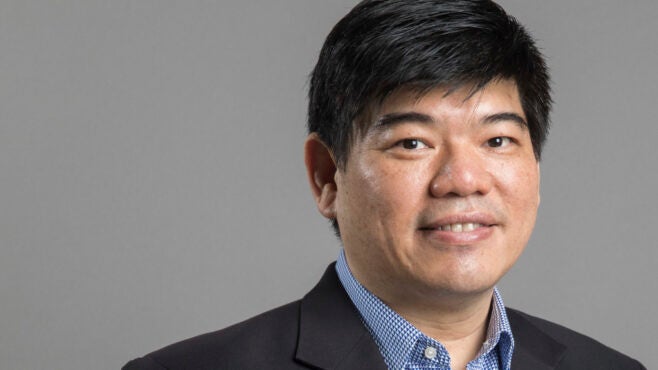 Investors not put off by step-up structure

The initial plan was for a 25bp step-up, but Ong Eng Hock, chief financial officer at NTU, says he wanted to make the penalty “meaningful”. “If you have like-minded investors who truly believe on environment, they shouldn’t really care about the penalty,” he tells Capital Monitor.

Certainly, the structure does not appear to have put allocators off; indeed it should alleviate the kind of concerns that are arising about some sustainability-linked deals. While there were questions on the roadshow about the bond’s tenor and its KPIs, there were none about the step-up, Ong says. “I don’t think anyone asked about the 50bp [penalty], nor why they’re not getting the money.”

Johann Plé, Paris-based portfolio manager at Axa Investment Managers, for one, says he tends to favour a structure where the step-up penalty goes into climate-friendly projects rather than investors’ pockets. “It avoids having investors investing in failing SLBs in order to be compensated for an ESG failure,” he adds.

Axa Investment Managers did not invest in the deal, which was bought entirely by onshore allocators. This made sense given the Singapore dollar denomination.

The NTU structure avoids having investors investing in failing sustainability-linked bonds in order to be compensated for an ESG failure. Johann Plé, Axa Investment Managers

Such structures are rare. In June, Japanese airline group ANA sold a Y20bn ($173.9m) five-year SLB with a 0.48% coupon. If the company fails to hit two or more of its KPIs, it said it will “make a donation to organisations engaged in activities aimed at creating positive impacts on the environment and society”. ANA is the first and only company to incorporate such a feature so far, though others are rumoured to be considering doing so.

NTU’s sustainability-linked bond priced at just 18bp over the Singapore swap offer rate, the tightest level for an SLB in the city state and the bond has barely traded in the secondary market. It was trading on 22 November at 99.45 at a 2.215% midpoint.

The final size of the book was S$850m, not stellar demand for a green, social or sustainability bond issue given the quality of the issuer. A-rated pharma giant Pfizer drew 3.7 times demand for its $1bn ten-year 1.75% sustainability bond in mid-August. But the NTU order level is broadly in line with demand seen for similarly rated bonds in Singapore.

Bond issues from AAA-rated issuers like NTU are always in demand because they are rare, says Clifford Lee, global head of fixed income at Singaporean bank DBS. He has worked on all three SLB issues in Singapore so far (see chart below).

However, Lee tells Capital Monitor: “You are not going to see five times oversubscription because the market will expect the bond to be tightly priced in the first place.”

He cites the S$1.65bn ten- and 30-year green bonds sold by Singapore’s National Environment Agency in September to underline his point. The AAA-rated government agency drew total orders just over S$2bn for the deal.

The two KPIs that NTU has picked are in line with the university’s sustainability framework.

The first is to halve, by 2035, the university’s Scope 2 carbon emissions from power consumption from the 2019 base level of 56kg of CO2 equivalent per square metre in 2019. It picked 2019 as the starting point because 2020 was an “unusual year” as a result of the Covid-19 pandemic, says PwC in its second-party opinion.

As for the second KPI, NTU's sustainability-linked bond aims to achieve carbon neutrality for the campus by investing in smart technology to regulate temperature on a real-time basis and source renewable energy from its utility providers. It will also adopt what PwC calls “state-of-the-art materials” to improve energy efficiency in its buildings.

NTU has also committed to buying what it calls “high-quality carbon offsets” if there are any residual Scope 2 emissions that it does not meet by 2035.

Ong says meeting the KPIs will not be an easy task: the bond tenor was 15 years rather than ten partly because of the major challenge of fulfilling the KPIs, he adds. “We gave ourselves a little bit more runway” because he did not want “to pay lip service” to sustainability goals.

All other universities that have sold ESG bonds globally have gone for either green or social debt, but the green structure “didn’t really suit our needs”, says Ong. Proceeds from a green bond can only be used for green projects – they exclude social initiatives, for instance.

With an SLB there are no limitations or restrictions on how the money can be spent. The structure is attractive because it allows the university not only to invest in sustainability projects but also research and education, Ong says.

The sustainability-linked bond structure allows NTU not only to invest in sustainability projects but also research and education. Ong Eng Hock, NTU

NTU stands out from its higher education peers because when it issued the SLB it also launched a S$1bn multi-year, medium-term financing plan built completely around sustainability, says Michael Yake, senior vice president at Moody’s Investors Service in Toronto.

Bankers involved with the deal expect there to be more issuance from elsewhere in the sector. “We clearly want more such universities and educational institutions to come into the market,” says Lee.

More are likely to follow NTU’s lead “to raise funds as well as to meet their sustainability goals”, agrees Edmund Leong, head of group investment banking at UOB.

Will NTU itself raise more green funding? “When interest rates go down,” says Ong. “That will get us to sit up and think ‘shall we do another one?’”

Over the past two years the three-month Singapore overnight rate has dropped from 1.57% to 0.28%. As central banks unwind their Covid-19 easing, expectations are that interest rates will rise next year.

It could therefore be some time before NTU returns to the bond markets, but in the meantime it has laid down a bold marker with its sustainability plans.