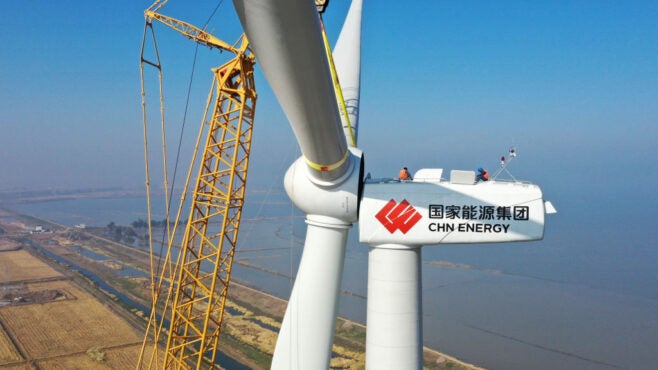 Installing wind turbines in China’s Anhui provice – but what happens when they come down? (Photo by Li Long/VCG via Getty Images)

Eager to bolster their green credentials, banks and institutional investors are widely touting the growing capital they are pouring into renewable energy and decarbonisation projects. Some $750bn is forecast to go into the sector this year alone, according to the International Energy Agency.

But many in the financial sector are overlooking – or choosing to ignore – a key issue at the heart of this market: what happens to these assets at the end of their life.

Globally, 43 million tonnes of wind turbine blades and 60 to 78 million tonnes of photovoltaic solar panels must be decommissioned by 2050, according to respective studies by Cambridge University (see chart below) and the International Renewable Energy Agency. Meanwhile, the boom in electric vehicles is raising concerns about what will be done with the thousands of tonnes of spent batteries. 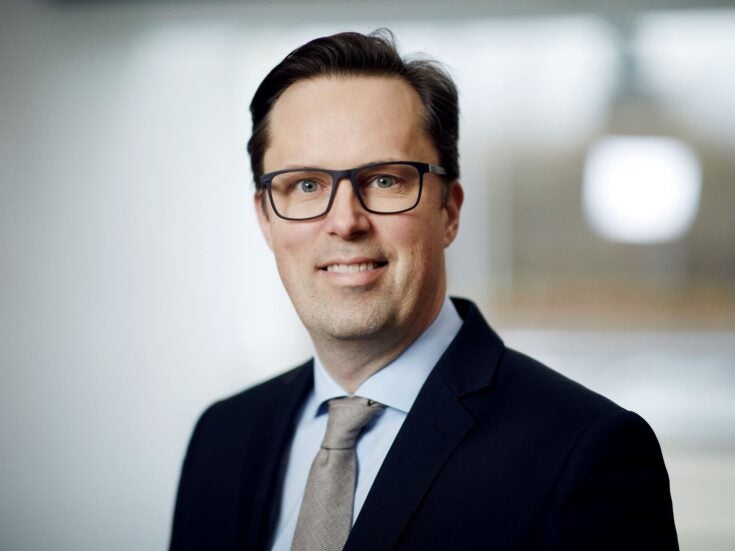 While 85% to 95% of wind turbines are recyclable – the structure is made largely of steel, copper and concrete – wind turbine blades are made from composite materials such as fibreglass, which have no established recycling route and are energy-intensive to make, according to a study by Cambridge University.

Almost all (90% to 100%) of wind turbine waste is still sent to landfill, according to Italian energy company Enel, or it is incinerated. Where solutions are being developed, they are not yet seen as mature enough, cost-competitive or widely available at industrial scale.

Similarly, solar power production is essential for reducing emissions worldwide, but photovoltaic modules are expensive to recycle. In the US, only about 10% of panels are recycled, says a report by the Massachusetts Institute of Technology. And with up to 78 million tonnes of panels forecast to be decommissioned by 2050, more sustainable solutions than landfill need to be developed.

But the scale of these challenges pale in comparison to those faced by nuclear power. By 2040, between 200 and 400 of the 500 active reactors globally are likely to be decommissioned, Fitch Ratings says, but limited experience of how to do this makes it difficult to estimate future financial and environmental costs.

Several bankers tell Capital Monitor that decommissioning of renewable energy assets has not been a focus of financing arrangements or corporate relationships, with the issue typically seen as someone else’s problem.

Moreover, investors are not seen to be sufficiently considering the potential environmental and social damage that may result from an asset reaching the end of its life. "The expected benefits of the so-called circular economy may mean that investors are not properly recognising such liabilities,” says Sean Kidney, chief executive of UK non-profit organisation the Climate Bonds Initiative (CBI). “So there is an investment risk not yet factored in and [it] should be factored in.”

Change is afoot, however. As the financial industry grapples with the challenge of measuring Scope 3 emissions – those not generated by a company itself but related to it, such as coming from its suppliers – it is placing greater scrutiny on all parts of the supply chain and their resultant emissions.

Banks are increasingly setting decarbonisation targets for their lending portfolios – Credit Suisse and ING, being two examples – albeit in the face of substantial pressure and criticism. And investors – both asset managers and owners – are increasingly focusing on the overall ESG credentials of companies, rather than just the products in which they invest. As a result, it should become harder for corporates to make inauthentic claims to sustainability, as many are seen to be doing as the number of pledges to achieve net-zero emissions rises.

However, no part of the financing chain seems willing to take responsibility for ensuring decommissioning is done sustainably, given the lack of regulatory guidance or obligation in most sectors and the nature of project financing.

A key issue is that neither banks nor investors are incentivised to look beyond the duration of their investment in a project. The decommissioning piece very often sits outside the financing arrangement.

The level of engagement with what happens at the end of an asset’s life depends on the type of financing and where it sits in the capital structure, says Mark Wells, head of structured debt capital markets for Europe, the Middle East and Africa (EMEA) at Japanese bank MUFG.

Decommissioning will be an increasing focus for all parties as it is something you won’t be able to ignore. Mark Wells, MUFG

For senior debt holders, it is rare to see anything in a financing arrangement about decommissioning as it is not seen as a major risk, he adds. But it will be an increasing focus for all parties as “it is something you won’t be able to ignore” in light of the growing scrutiny of carbon emissions.

The duration of MUFG’s lending structure – which might typically be around five years – means project finance arrangements are unlikely to cover how an asset might be decommissioned in 20 years’ time, confirms Geraint Thomas, MUFG’s head of sustainable financing for EMEA.

However, the bank’s relationship with the corporate client – and the push to measure and track its own Scope 3 emissions – means it must take decommissioning into consideration, he adds.

“Decommissioning is very important to us,” he says. “Do we have a solution? Not yet, but it is important to say to our clients: ‘What are you going to do?’”

For equity investors, meanwhile, decommissioning is an essential part of the renewable energy story, as they are more often involved in the financing of the asset ‘from cradle to grave’. Hence they need to look at the whole ESG framework of the issuer and give more attention to end-of-life management. Capital Monitor approached several institutional investors but they declined to comment for this article.

Bond guidelines due for updating

As for fixed income investors, green debt is increasingly being used as a vehicle to finance such projects. For example, in February Spanish energy company Iberdrola issued a €2bn green bond to finance two offshore wind farms: Saint-Brieuc in France and Baltic Eagle in Germany.

Yet there is no specific requirement to disclose decommissioning plans. Neither the International Capital Market Association’s (ICMA) Green Bond Principles – the most widely used guidelines for issuing green bonds – nor the EU’s Green Bond Standards, explicitly cover waste management and the end of an asset’s life. 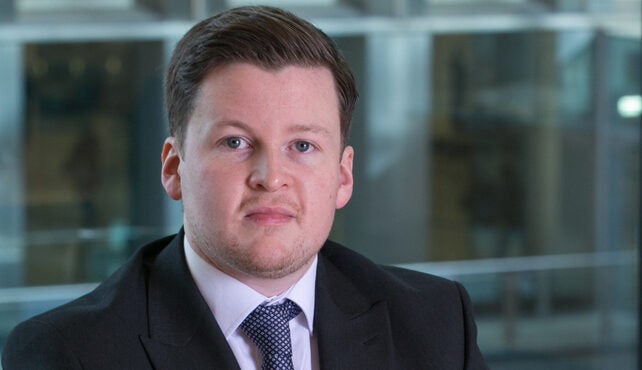 David McNeil of Fitch Ratings says he expects green bond frameworks to be updated with more of a focus on decommissioning of assets. (photo courtesy of Fitch)

However, David McNeil, head of climate risk at rating agency Fitch, says he expects both frameworks to be updated with a focus on decommissioning. “For any significant renewable energy development linked to green bonds, I would expect there to have to be qualitative disclosures on how the end of life is managed."

Meanwhile, the CBI, which provides green debt labels, says it is not examining this area at the moment, though it may do so in the future, says Kidney. The green bond label can include a life cycle analysis of an asset from an emissions perspective, he tells Capital Monitor, but it is not a requirement for the issuer to provide that information.

While regulatory focus on good supply chain management and Scope 3 emissions is increasing the onus on investee companies for good end-of-life management, and pressuring banks to stipulate such conditions for projects they are involved in, it is still very early days.

“Lenders are looking into this, but there are no hard rules to date,” says Seetal Modi, another partner at Fladgate. “Unless we have regulation, it is difficult to motivate lenders to think this far ahead. They are still at the stage where they are simply advertising that they are investing in green products.”

As it stands, responsibility for decommissioning ultimately lies with the asset owner. But without clear regulatory guidance, it is largely seen as a future problem for which companies do not carry the cost on their balance sheet, thereby increasing liabilities for governments, investors and the environment.

Some governments do set certain rules in this area. The UK requires owners of renewable assets to submit decommissioning plans in their financing bids, which are signed off by the government.

However, these plans are generally too vague, says Tye. “They’ll say ‘we’ll do this, and it’s going to happen in 20 to 25 years’ time’ and they’re required to put money aside, but the detail is lacking,” he explains. “Only one pilot wind farm has been decommissioned to date. There is a legal framework in place, but is it adequate? Who knows?” 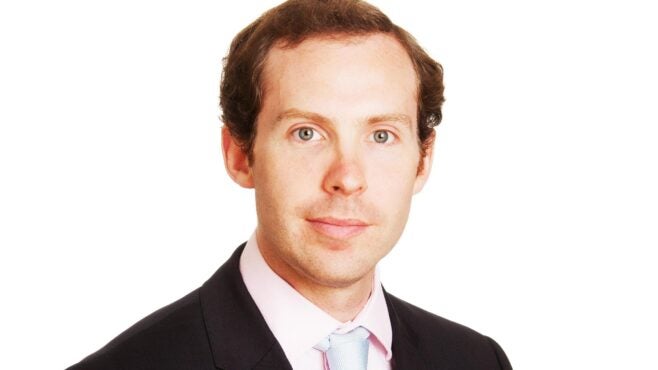 Accordingly, there will be a growing onus on investee companies to demonstrate good product stewardship and end-of-life management of renewable energy assets as financial watchdogs focus more on decommissioning and waste management, says Fitch’s McNeil. Regulation – most notably in Europe – is starting to tackle such areas, but “not in a meaningful way”, he adds.

The EU Taxonomy – which sets out a list of environmentally sustainable economic activities – contains a clause stating that waste management have no adverse impact and explicitly asks for assessment of end-of-life management.

And the Sustainable Finance Disclosure Regulation (SFDR) will by 2023 require investors to report on the “adverse impacts on sustainability” of the asset they hold and the entity issuing it. The EU has identified 64 ‘adverse impact’ indicators under the SFDR, of which waste levels is one of 18 compulsory metrics.

Moreover, end-of-life management is something second-party opinion providers, such as Vigeo Eiris and Sustainalytics, already consider. Sustainalytics also looks at issuers’ overall approach to sustainability, which should include strategies for material environmental and social issues, says Zach Margolis, the company’s manager of corporate solutions.

Ultimately, however, increasing disclosure and accountability amounts to nothing if it does not solve the problem in hand: the mountains of fibreglass, composite materials, solar panels and batteries heading for landfill.

Expanding the so-called circular economy will be part of the solution. Much renewable energy infrastructure is resource-rich and includes rare earth elements and other valuable materials, such as steel, copper and glass. Recovering these and reintroducing them into the production cycle can present a commercial opportunity and reduce the reliance on raw minerals.

Many corporates are making progress in this area. Aircraft maker Airbus and aircraft storage company Tarmac Aerosave have developed a method for decommissioning, dismantling and recycling planes in an  environmentally responsible way, with up to 90% of the materials eligible for reuse or recycling.

“We need specific disclosure on how companies are managing decommissioning risk in the context of the circular economy,” says Kidney. “We’re not there yet but we’re seeing continual development.”

Decommissioning in the renewable energy sector will be a challenge. And yet it is the tip of the iceberg compared to the more urgent problem the fossil fuel industry faces as multi-billion-dollar assets become stranded and obsolete.