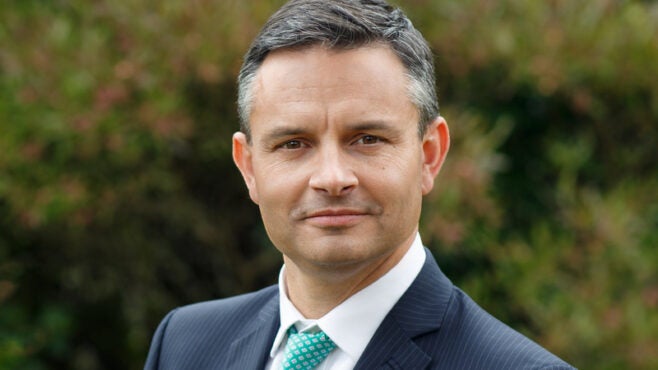 James Shaw, New Zealand climate change minister: “We’ve had the right policies, but they have ultimately been framed in a way that has made them ineffective.” (Photo courtesy of NZ government)

New Zealand may be one of the few countries to have enshrined its 2050 net-zero emissions target in law, yet it is not the exemplar of environmental progress that many may think it to be.

Greenhouse gas emissions in most industrialised countries have fallen over the past three decades, but in the Asia-Pacific nation they have risen by 57% between 1990 and 2018, making it one of the worst-performing rich countries in that regard.

And while New Zealand may have a miniscule share of global emissions – at 0.17% – its per capita pollution levels from its five million population stand at 16.9 tonnes of carbon dioxide equivalent. That is sixth-highest of the 43 countries in Annex I of the United Nations Framework Convention on Climate Change, covering industrialised nations and those in transition.

However, Jacinda Ardern’s Labour government has, since being returned to power in October 2020, had a renewed focus on the environment after inviting Green Party co-leaders James Shaw and Marama Davidson into government under a cooperation agreement.

The new administration got some good press in the run-up to the Cop26 summit in November for its October pledge to halve emissions from 2005 levels by 2030. That commitment is among the more ambitious made by countries thus far, though it has been criticised for relying on “accounting tricks” and because two-thirds of the emissions cuts would be happening overseas.

Speaking to Capital Monitor in late January, Shaw, now New Zealand’s climate change minister, admitted the country had to make up for lost time. “Fifty per cent sounds ambitious, but emissions are cumulative and we’re operating within a budget, so it’s really the least we can do,” he says. “It’s gratifying that things are changing, but we have a steeper hill to climb.”

The government is yet to set out exactly how it will achieve its target. Its first comprehensive emissions reduction plan will be published in May alongside the budget. Investments will be “somewhere north of NZ$4.5bn ($2.9bn) [in total] over the next four years”, says Shaw. That is a small fraction of the country’s annual budget, which is NZ$50bn for 2021.

Still, New Zealand won some early environmental kudos for joining the Beyond Oil & Gas Alliance (Boga), an initiative unveiled at Cop26 whose members agree to phase out oil and gas exploration and production. The country is an associate Boga member because the commitments required of a full member would open it up to the risk of investor lawsuits being brought over previously agreed fossil fuel exploration contracts, Shaw says. Denmark has admitted to delaying its emissions reduction commitment for similar reasons.

Nonetheless, joining the alliance will accelerate New Zealand’s transition to cleaner energy, Shaw says. “The narrative before was that gas was a transition fuel – but gas companies never actually put an end date on it [the transition]. So it wasn’t really a transition; it was more of a slogan.

“The move we made was partial, that’s true, but it has had a radical effect on the [domestic] energy industry, which is now starting to replace its oil and gas with green hydrogen and renewables,” he adds.

Moreover, New Zealand was the first country (in April last year) to announce mandatory climate disclosures for the financial sector – based on the Taskforce on Climate-related Financial Disclosures (TCFD) framework.

New Zealand has been an early mover on tackling climate change in other areas too. It has had a national emissions trading scheme (ETS) in place since 2009, which is mandatory for some activities and voluntary for others.

However, Shaw says: “We’ve had the right policies, but they have ultimately been framed in a way that has made them ineffective."

For instance, the ETS has not had a meaningful impact on emissions reduction, in part due to the make-up of the economy and the way the scheme was constructed. The ETS covers all sectors apart from agriculture, despite the latter accounting for 5.5% of GDP and 48% of total emissions.

The carbon price had remained below NZ$20 for most of the scheme’s life, but started steadily rising since May 2020 and is now hovering around NZ$75 (see chart below). The jump is reportedly down to high demand, low availability and the involvement of speculators. Shaw says the government is pleased with the result.

New Zealand had considered including agriculture in the ETS, but instead agreed that the sector propose an alternative pricing mechanism by 2025. If that mechanism is not satisfactory, agriculture will be covered by the ETS from 2025.

Looking to the finance sector

Local policymakers are now looking to the financial services sector to help manage climate risk and change corporate behaviour. “Most people don’t understand or appreciate just how critical finance is to the [low-carbon] transition,” Shaw says.

He adds that his career start in management consulting hammered home just how important the private sector is to the energy transition. Shaw was initially at PwC, then moved to HSBC, before entering parliament in 2014.

Professional services firms, for instance, measure and provide accountability and assurance on emissions, he says. “So it quickly became obvious to me that this is so important for the environment, and that has shaped a reasonable portion of my policy agenda.”

Making climate risk a director-level responsibility at banks is the most significant element of the government’s roll-out of standards under the TCFD, says Shaw. This will kick in in 2023.

He cites the climate risk report published by Westpac New Zealand in late 2020, which showed that nearly 3% of the bank’s mortgage book was exposed to climate risk.

“It might not sound like a lot, but in cash terms that is massive,” Shaw says. “It limits the other risks banks can expose themselves to, and if it gets much higher it could become a stability question. That’s why our reserve bank was so keen for us to make these reports mandatory across the sector.”

New Zealand may be upping its game on climate action, but it is a different story for its biggest trading partner. In recent years Australia has emerged as a major environmental laggard, even as parts of the country suffer increasingly devastating droughts, bushfires and flooding. Regardless of the longer-term risks, prime minister Scott Morrison’s government is supporting the domestic coal mining industry.

By contrast, Australia’s investment community – notably its large pool of retirement funds, including institutions such as Aware Super and UniSuper – is hyper-aware of the risks of climate change.

“Although [Australia’s] federal government has been hands-off [in respect of climate action], I suspect we’ll see a lot of movement regardless,” says Shaw. “It’s a bit like the US during the [Donald] Trump years [2016 to 2020] – there’s still a huge amount going on.

“The Australian investment community is extremely active on sustainability,” he adds. “It has these huge pools of capital looking for places to land, and New Zealand is good for that. Given the huge risks Australia faces, there’s an increasing number of corporate directors getting very, very twitchy.”

“While we disagree on a lot of the finer policy detail, we’re now broadly aligned on the overall direction,” he says. “I think that’s partly because we see the catastrophic impact that climate policy swings and roundabouts has had on Australian politics, and on investment. We don’t want that to happen here.”

Be that as it may, the devil is often in the detail, and New Zealand policymakers look to be facing some tough negotiations. Time will tell whether the government will be able to live up to its climate ambitions. Its emissions reduction plan to be released in May will offer a clear indication of that.