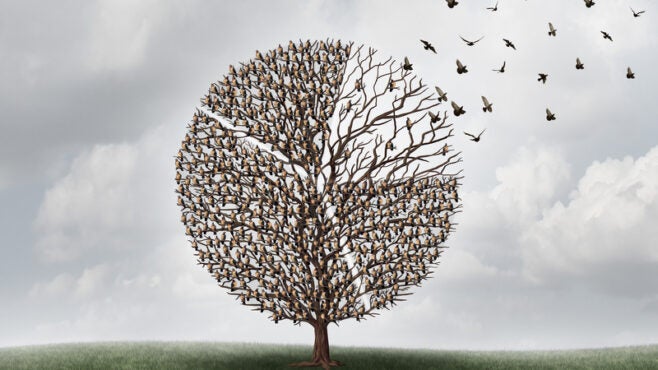 When is it time to fly from certain assets? (Photo by wildpixel from iStock)

The divestment versus engagement ‘debate’ – over whether investors should sell out of fossil fuel assets or hang onto them and wield influence as shareholders – has divided investors and activists alike. But mounting evidence that private investment companies are cashing in on dirty stocks means the former approach is fast losing credibility. In late October, the founder of London-based Odey Asset Management told the Financial Times that he was providing financing for unlisted vehicles buying up assets discarded by oil majors.

The main argument against divestment – not just an approach but a movement, first led by students, activists and faith groups – is that selling off fossil fuel stocks simply makes them somebody else’s problem.

“You’re just throwing trash across the fence,” James Alexander, chief executive of the UK Sustainable Investment and Finance Association (UKSIF), said of divestment at a press briefing in November held by ShareAction, the non-profit organisation that promotes responsible investment. “Fundamentally, that might be fine, if your neighbour is very diligent and recycles it all. But realistically, what’s most likely to happen is that your neighbour is going to be a hedge fund or some sort of private equity fund… treating it purely to extract as much value as possible.”

The CEOs of BlackRock, State Street Global Advisors and Danish investor PensionDanmark – Larry Fink, Cyrus Taraporevala and Torben Möger Pedersen, respectively – have gone so far as to say that divestment is akin to ‘greenwashing’.

Despite investor scepticism about the efficacy of divestment, the number of asset managers with divestment policies has snowballed over the past few years. A report published in October by pressure group Divest Invest finds that the number of commitments by asset and asset owners has increased from $52bn across 181 institutions in 2014 to some $39.2trn across 1,485 institutions in 2021.

The available figures on divestment relate to the total assets under management (AUM) of institutions rather than actual money divested, so actual sums of fossil fuel assets divested are hard to come by.

But to give a sense of the scale of influence of financial institutions that have made such commitments, Capital Monitor has tracked all the fossil fuel divestment and exclusion policies of asset managers that have been recorded by the Institute for Energy Economics and Financial Analysis (IEEFA) and environmental non-profit organisation Reclaim Finance over the past few years.

The findings add weight to the claims made in the Divest Invest report that the divestment movement is growing fast. Clearly, it is a tool wielded by investors in some shape or form.

Yet some investors, including those not featured in the chart above, cite concerns about the inefficacy of divestment as a reason for preferring to engage with companies instead, via stewardship. Stewardship entails engaging directly with companies or voting on shareholder resolutions. It is widely cited by the world’s most influential passive managers as preferential to divestment when it comes to responsible investing.

For example, when Capital Monitor approached Vanguard in August for comment on its lack of a coal exclusion policy, the $5.9trn fund house made its preference clear: “Vanguard – and the [Net Zero Asset Managers] initiative – recognises that divestment is not always the best way to effect positive change. Investors who divest from companies to avoid exposure to these issues lose these avenues to engender change within investee companies through responsible active ownership tools like voting and engagement.”

But Capital Monitor analysis of the latest voting records of asset managers on ESG issues alongside a timeline of their divestment and exclusion policies shows that early adopters of such policies are those that engage with companies the most. By contrast, those without any divestment policies, like Vanguard, tend to engage with companies the least.

On 15 December, ShareAction released its annual assessment of the world’s 65 most influential asset managers’ voting records, ranking them according to how many environmental or social shareholder resolutions they had supported over the past year. Comparing these rankings with the date on which their first fossil fuel divestment or exclusion policy was implemented, a link between high engagement and exclusion of fossil fuels emerges.

Aviva Investors, for instance, is an asset manager that ranks highly on engagement, voting for 94% of environmental or social shareholder resolutions, based on ShareAction definitions. The UK firm is also one of the first adopters of a divestment policy for “highly carbon-intensive fossil fuel companies” as a means to make clear that a failure on behalf of an investee to act when engaged is not without consequence.

In July 2015, Aviva Investors wrote in its policy report: “We consider engagement to be an important step in our investment process but recognise that this must carry the threat of divestment to be meaningful.” That year, it identified an initial set of 40 companies that derived more than 30% of their revenues from thermal coal mining or coal power generation, and "undertook focused engagement" with these 40 companies. Of the 40, the eight that were unresponsive were put on a list for potential divestment.

However, for that threat to be real there also needs to be evidence of actual shareholder engagement. ShareAction’s findings show that despite the recent buzz around ESG, the world’s largest asset managers show “scant improvement” on voting since last year and continue to block efforts to make progress on environmental and social issues.

The 51 asset managers assessed both this year and last increased their proportion of ‘for’ votes by just 4% on a similar set of resolutions. And while seven asset managers showed an improvement of more than 20 percentage points since last year, the vast majority showed "minimal movement".

The report also critiques the world’s largest asset managers for either voting against or abstaining on a number of ESG resolutions. ShareAction finds that all six of the largest asset managers by AUM voted more conservatively than the recommendations of their proxy advisors, ISS and Glass Lewis, and that 18 resolutions would have passed if the ‘big three’ (BlackRock, State Street Global Advisors and Vanguard) had voted in favour of them.

These resolutions included two at Chevron: one that called on it to prepare a report on the impact its business would have from the net-zero 2050 scenario and another demanding the company provide more information on its lobbying activities. Both were narrowly defeated, receiving around 48% of votes.

ShareAction points out that being a "passive" investor is not an excuse for voting less. The UK’s Legal & General Investment Management, a big index-based investor, voted in favour of 77% of shareholder proposals.

This year, State Street Global Advisors, ranking 54th out of 65, voted for a smaller share (32%) of shareholder resolutions in 2021 than in 2020 (35%), though it did vote on 42% of environmental resolutions compared with 40% last year. The fund manager has no fossil fuel divestment policies.

Vanguard, which ranks 58th, has improved its record since last year, with 26% for shareholder and 38% for environmental resolutions. Last year, it ranked 56th out of 60, with 14% and 15%, respectively. Vanguard also has no fossil fuel divestment policies.

BlackRock made waves when it implemented a divestment policy at the start of 2020, where it committed to removing companies that generate more than 25% of revenues from thermal coal production from its discretionary active investment portfolios. Its policy therefore only applies to its actively managed assets, which make up roughly a third of its total AUM.

In 2021 BlackRock, which last year ranked 57th out of 60, significantly improved its voting engagement ranking: it was among those, including Capital Group, that saw an increase of more than 20 percentage points in votes for shareholder resolutions between the 2020 and 2021 AGM seasons. Data shows BlackRock to be the world’s second-largest shareholder in coal companies, so it faces particular pressure to step up its engagement practices.

Yet BlackRock’s adoption of a divestment policy, regardless of its strength, is hailed as a huge victory by the divestment movement. “One of the most important victories for the movement has been the financial elite’s gradual acceptance of the movement’s core financial arguments,” says Divest Invest’s report.

It was once considered a fringe position to argue that the fossil fuel industry’s value is dependent on “stranded assets” (fuel reserves still buried in the ground that will become worthless), adds the report. Now, the “concept is cited by BlackRock, the largest investment house in the world, as a reason to divest”.

As the above data shows, there is a good case for assessing divestment and engagement strategies in light of one another. As those with the strongest policies tend to be more engaged, and vice versa, it makes sense to view them as intertwined. And whichever is the most effective approach, some investors clearly practice what they preach more than others.