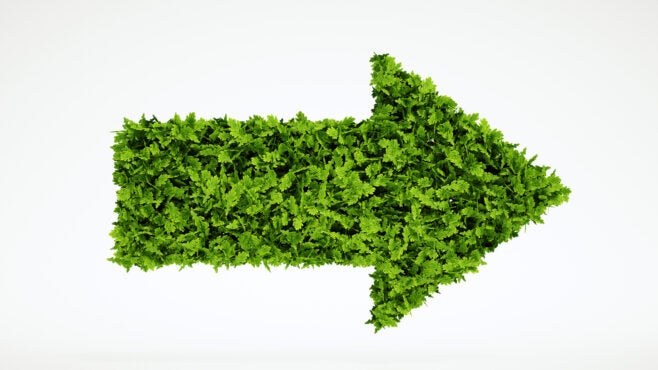 Companies across Europe made a big push to issue green, social and sustainable debt last year. (Image by Petmal, via IStock)

The volume of green, social and sustainability (GSS) debt issuance continues to grow. Last year saw $497.7bn issuance from 1,099 issues, according to Capital Monitor analysis, only a fraction below the $500bn issuance famously predicted by Christopher Flensborg, head of climate and sustainable finance at Swedish financial group SEB, in December 2020. This was up from the $397bn from 1,005 issues in 2020.

Poring through data compiled by sister company Global Data, European companies delivered the most green, social and sustainability (GSS) debt issuance in 2021, with the number of bonds issued only slightly lower than the rest of the world combined.

Europe issued 543 GSS bonds, followed by Asia-Pacific at 335 and North America at 165. South and Central America and the Middle East came in a long way behind with 35 and 21 deals, respectively.

Bond volumes suggest that not only did European companies issue more bonds, they were also larger in size. Europe raised $308.2bn, with Asia-Pacific on $87.9bn and North America on $70.1bn. The average GSS bond sale in Europe last year was for $567.6m and those in North America were $424.2m, while those in Asia-Pacific came in at less than half of Europe's at $262.4m.

Last year was a distinct step in issuance for all parts of the world over 2020, with the exception of North America. European companies continued to issue the most GSS bonds (year-on-year) with 453, and raising a total of $242.3bn. Asia-Pacific companies raised $49.5bn from 254 issues, while North American firms raised $79.8bn from 249 issues.

Environment tops use of GSS proceeds

It is perhaps not a major surprise to see that environmental key performance indicators (KPI) have dominated issuance over the past few years. Even discounting the peak of 33 bond issues with environmental targets in September 2020 – the overwhelmingly highest month of issuance since January 2019 – the whole of last year saw 87 environmentally targeted bonds versus 14 with combined environmental and social targets and four with social targets.

The four with social targets included the €14bn ($14.5bn) two-tranche seven-year and 30-year bond from the European Commission at the end of January last year. Funds raised have been lent to member states to cover the costs of funding Covid-19 pandemic measures.

Also included was the €750m 0.75% ten-year bond from La Banque Postale in June with the proceeds used to finance its portfolio of affordable housing assets as well as hospitals and care homes.

The tradition of green issuance from Sweden is so strong that it makes up 5% of the global total, even while the country represents just 0.3% of the global population and economy, according to the non-profit organisation the Climate Bonds Initiative.

“Sweden is proof that it’s possible to transition to a more sustainable economy and continue to create jobs if governments do it in a responsible way,” Åsa Lindhagen, the country’s financial markets minister, told Capital Monitor in October last year.

In terms of issuance volume, however, the UK comes out on top. It sold $53.5bn worth of GSS bonds last year, notably above Germany on $47.5bn and France on $43.2bn.

Sweden’s volume of issuance languished rather at $10.1bn.

The most active underwriters of GSS debt in Europe are BNP Paribas, Crédit Agricole and JP Morgan Chase. Over the past three years, BNP Paribas has worked on 157 deals, while Crédit Agricole has managed 146 deals, slightly ahead of JP Morgan at 141 deals, according to Global Data.

Innovative green deals of the past couple of years had these banks on the ticket, such as the €500m ($564.7m) loan and private placement for French builder NGE, a £300m ($411.1m) five-year sustainability bond for British fashion house Burberry, and a €1.45bn dual-tranche sustainability-linked term loan for Ramsay Santé, Europe’s second-largest private healthcare provider.

The difference between volume and value

Third-party opinion providers are the asset class’s gatekeepers. They provide an assessment of the accuracy and integrity of a bond, loan or indeed sustainability framework and very often report, usually on an annual basis, throughout the life of a bond or loan on how its sustainability goals are progressing.

Over the past three years, Cicero has rated 414 bonds, Sustainalytics has rated 285 bonds and ISS ESG has rated 222.

Although Moody’s-owned Vigeo Eiris has rated far fewer bonds – 113 over the past three years, and last year almost a third of the number of bonds that Cicero did in Europe – it joins Sustainalytics at the top of the ranking table for the volume of GSS bonds it has rated in terms of value.