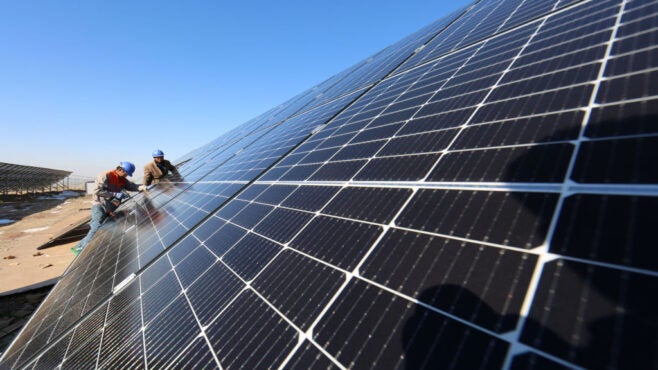 The signs from both governments and the financial sector are hugely encouraging for the future of renewable energy, but bankers say ambitions for the industry will need backing with suitable policy in light of rising market risks and financing challenges.

The International Energy Agency (IEA) forecast in its ‘Renewables 2021’ report this month that growth of global renewable energy capacity is accelerating – to the extent that it will rise by 60% from 2020 levels to exceed 4,800 gigawatts by 2026 (see charts below). In support of its prediction, the Paris-based body cited favourable public policy and the setting of more ambitious climate goals by corporates, banks, asset managers and asset owners.

Institutional investors are warming to green energy assets and either cutting exposure to fossil fuel companies or putting pressure on them to establish credible climate transition plans.

There is an “abundance of capital” keen to back clean energy assets, said Romain Talagrand, head of renewable energy at BNP Paribas, speaking at the online forum. That is clear from “the scale of recent projects that wouldn’t have happened a few years ago”.

Talagrand cited as an example the UK’s Dogger Bank, the world’s biggest offshore wind farm. Its owners, Equinor and SSE, announced the final close on the £3bn ($4bn) third phase of the project this month, which involved 28 lenders, including BNP Paribas.

BNP Paribas's renewables project finance book for Europe, the Middle East and Africa (EMEA) has tripled in value in the past four years and now accounts for 90% of its power sector project financing, Talagrand said. He declined to identify the dollar value.

Clean energy is, however, a fast-changing sector lacking well-established policy, posing risks that investors – and increasingly capital-constrained banks – are often unwilling to take on.

Talagrand said there were two main obstacles: “We are facing new technologies so they are developing fast, but the supply chains are not yet industrialised, and some of the performance assumptions are not completely stabilised.”

A related issue is that “we do not have a regulated environment for a lot of these new asset classes”, he added. “You're facing market risks for markets in their infancy, so the trajectory is very difficult to anticipate.”

He pointed to new businesses – such as battery manufacturing or hydrogen power – posing high market risks and uncertainty. What would help banks assess the trajectories of such segments are clearer, longer-term signals on carbon costs or on the development of electric vehicles in Europe, Talagrand said.

Moreover, the removal of some of the hurdles to obtaining permissions for renewable energy projects would allow for faster deployment, he added.

Governments have recently found short-term fixes [to high energy prices] that are quite counterproductive to the implementation of the energy transitions. Romain Talagrand, BNP Paribas

Fellow panelist David McNeil, head of climate risk at Fitch Ratings, agreed with Talagrand that international carbon pricing would be useful for addressing longer-term policy and regulatory risk. The long-term financial case for hydrogen power, for instance, rests "on the assumption of the price of carbon increasing, particularly to the point where it would impact on natural gas projects", McNeil said.

However, the recent power price spikes in Europe and the UK have laid bare a lack of political planning and decision-making about how to address the climate transition, Talagrand said. Governments have recently found “short-term fixes [to the high prices] that are quite counterproductive to the implementation of the energy transition”.

The French government is offering handouts, which are effectively a subsidy for fossil fuel and conventional electricity, he added. Meanwhile Spain’s recent move to claw back profits from renewable energy operators “obviously is not a very good incentive for investment and other similar initiatives elsewhere”.

In fact, rising commodity, energy and shipping prices in general have sharply raised the cost of producing and transporting solar photovoltaic (PV) modules, wind turbines and biofuels, the IEA report says. It estimates that investment costs for utility-scale solar PV and onshore wind are 25% higher than in 2019.

On top of all this, there is the issue of what to do with the fast-expanding mass of renewable energy components once projects are decommissioned – something that many banks and investors seem to be overlooking or disregarding.

Speaking on the same panel as Talagrand, Adrienne Horel-Pagès, chief sustainability officer at La Banque Postale, supported his view. With regulatory changes such as Basel 4 coming, she said, lenders “will have more and more difficulty aligning the maturity of the financing solutions with the maturity of the project”.

As a result, bankers will need to work increasingly with investors “on defining new solutions to be able to finance those projects”, Horel-Pagès added.

Talagrand confirmed that BNP Paribas has had more dialogue with investors in the past few years on such deals. “More investors have been moving into the private debt market because there's not enough investment opportunity in public debt markets,” he said. “And it's only the beginning of the trend.”

Governments, for their part, are sending positive signals on climate policy, but there are concerns as to whether their actions will be sufficient.

Italy’s minister for energy transition, Roberto Cingolani, said in a Financial Times interview on 19 December that his fellow citizens would have to accept new wind turbines or solar farms in their local area. He has set a target of producing at least 70% of electricity from renewables by 2030, up from 34% currently. That is a big step up from the 55% formal commitment Rome has made to the EU.

Also in the past week, the European Commission (EC) unveiled new rules that will allow EU countries to pump more money into green projects and set higher hurdles for the approval of state support for fossil fuels.

But environmental lawyers at UK non-profit organisation ClientEarth say the new rules are “blatantly inconsistent” with the EU’s pathway to climate neutrality and a sustainable economy, as they allow subsidies for natural gas.

The EC currently plans to include both natural gas and nuclear in its forthcoming taxonomy of sustainable activities but is facing pressure to exclude them – especially the latter.

Such support for green energy looks increasingly critical, as a growing number of investors are reducing – or totally removing – their backing of fossil fuels.

The UK’s National Employment Savings Trust (Nest) this week sold its holdings in ExxonMobil and four other energy companies (Imperial Oil, Korea Electric Power Corp, Marathon Oil and Hong Kong-based utility Power Assets). The £22bn state-backed pension fund said its decision followed a three-year engagement process during which the companies were “unresponsive” and lagging behind on climate-related topics, including reducing emissions and investing in low-carbon assets.

Nest had held the five companies in a £9bn ‘climate aware’ fund run by UBS Asset Management. The Swiss company has decided to apply the same exclusions across its suite of climate-aware tracker funds, which hold assets of about $20.8bn, as well as its actively managed equity and fixed income sustainability funds.

Moreover, Dutch retirement fund ABP said in October it would sell its entire €15bn of holdings in coal, oil and gas companies.

The €528bn fund cited the need for radical change to cut emissions and pointed to key reports issued this year by the IEA and the UN Intergovernmental Panel on Climate Change. It expects to sell most of the assets by the first quarter of 2023.

ABP chairman Corien Wortmann-Kool said in a statement that the fund sees “insufficient opportunity for us as a shareholder to push for the necessary, significant acceleration of the energy transition at these companies”.

Instead ABP will focus on using its influence as an owner to encourage bulk users of fossil energy – such as electricity companies, the car industry and aviation – to become more sustainable. “We will further tighten the criteria for these investments in 2022,” Wortmann-Kool added.

Admittedly, most investors – and bankers, including Talagrand – prefer to seek to engage with fossil fuel companies rather than sell out of them.

But the ultimate direction of travel is clear. And it seems stronger government policy will be needed if, as the IEA said in May, annual clean energy investment worldwide must more than triple by 2030 to around $4trn to reach net-zero emissions by 2050.